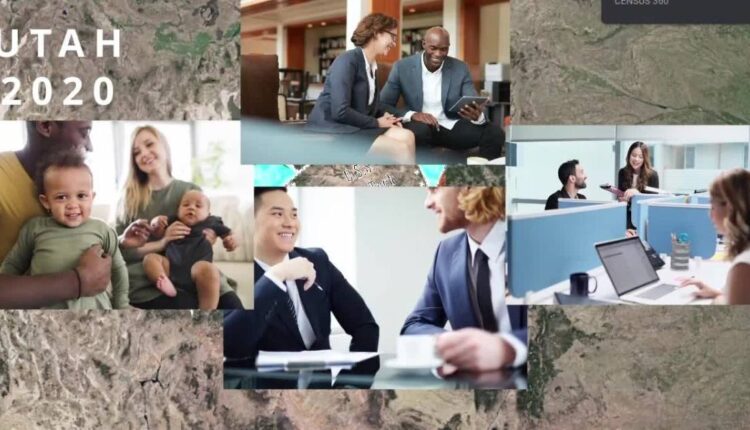 2020 Census: Utah Through the Ages

If you put a time machine down 10 years and then 100 years to see how the people and places have changed in Utah, the U.S. census would make a pretty good transdimensional map.

But it’s also because the census itself – the choice of words and the focus on certain aspects of life – reveals something different about the world every decade.

For example, the 2020 census asks for multiracial identities in much greater detail. Is your heritage from two races? Three? Four or more?

It’s clear that Utahners think in this direction, because from 2010 to 2020 152% more residents said yes – they fit into one of the multi-ethnic categories.

Mallory Bateman of the Kem C. Gardner Policy Institute found the last number. She coordinates the census data for the state of Utah. She also looked at the racial and ethnic makeup of the new residents, who made Utah grow faster than any other state.

“Over half – I think it was 52 percent – of our nationwide population growth came from racial and ethnic minorities,” Bateman said.

You can see some of her work on the Gardner Institute website.

The 2020 census also included a new metric called the Diversity Index, which measures diversity as more than just “white” and “minority”. The index tells you how likely it is that two randomly selected people in a given location are of different races or ethnic backgrounds.

Utah’s 2020 diversity index is 40.7. That means four out of ten times that this random pairing of people would be different.

To explain why such an index is useful, consider the values ​​for Salt Lake Counties and San Juan Counties.

Salt Lake County is Utah’s second most diverse county with an index of 50.1, meaning that five out of ten random pairings would be different.

San Juan County is the most diverse in Utah with an index of 57.9. Almost six out of ten pairings would be different.

The interesting thing between the two is that Salt Lake County has a predominantly white, non-Hispanic population, with a large population representing other races and ethnicities. In San Juan County, most of the residents are Native Americans or Alaskan (the official census category. Navajo and Ute, of course). The index is about diversity, not a specific race or ethnicity.

If we use the census to fly back a century to 1920, we see a different human landscape in many ways.

First, race is viewed very differently. Black or African American people (they are called an antiquated and offensive term) counted only 1,446 in Utah. The American Indians, dubbed “Indians” at the time, numbered 2,711, and the Asians were divided by nationality. With 2,936 inhabitants, the Japanese made up the largest group among Utah’s minorities. The census counted people from India as “Hindus” and did not even include a category for Latin American or Hispanic ethnicity.

The 1920 census was much more meticulous than it is today about the peculiarities of the national origins of Europeans. They counted people in the “Native, Foreign, Mixed Race, and Abroad-Born Whites” categories.

Utah newspapers at the time carried reports of the troubled immigration system, with an emphasis on Europeans coming to Ellis Island.

The Emery County Progress published a comment from Secretary of Labor James J. Davis advocating a system to physically and mentally test potential immigrants before they leave their country.

“I believe that anyone who comes from abroad to degrade America’s level of intelligence, physical, spiritual, or moral life is degrading every honest naturalized citizen,” wrote Davis in the June 23, 1923 issue.

On October 8, 1921, The Emery County Progress printed another article on another trend from the 1920 census – the first time more Americans lived in cities than in the countryside. At that time there were cities with more than 2,500 inhabitants. Moving to the cities, according to the article, is morally dangerous.

“Back to the ground! An American slogan for Americans!” wrote Edwin T. Meredith.

In 1920, 52% of Utahners lived in rural areas. In fact, even Utah’s now urban counties had large expanses of farmland and empty land, and people were far more dispersed across the geography of the state.

Apart from Salt Lake City, Ogden was by far the largest city with almost 33,000 inhabitants compared to Provos 10,303.

But people moved to the cities, and that trend only accelerated.

In 2010, the census showed that Utah has the eighth largest urban population among the 50 states.

In 2020, Utah’s urbanization followed the same pattern observed nationwide. According to Bateman, the fastest growing communities bordered on large cities.

“These neighboring areas are definitely where the really vigorous growth is happening, but there is growth at the core, but it’s a different order of magnitude,” Bateman said.

Each of Utah’s three major metropolitan areas has a venerable city at its core, but the greatest growth is in the suburbs.

Still the largest city in Weber and Davis Counties, Ogden grew 5 percent from 2010 to 2020, but West Haven grew 63 percent.

Salt Lake City is still bigger than anyone else in the state, and grew 7 percent, but nearby Herriman grew 153 percent.

Still the largest in Utah County, Provo has increased its population by 2 percent – but there’s a town called Vineyard nearby that was just beginning to grow in 2010 with a population of 192.

“Weinberg is the one we watched and its growth rate was nearly 9,000 percent,” Bateman said.