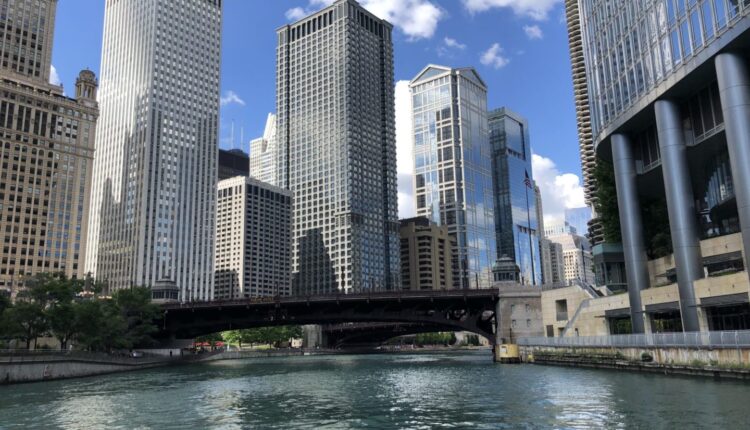 After 40 Days and 7,000 Miles, the Cost-Benefit Analysis Is in: It Was Totally Worth It

Chicago as seen from the water. Photo by Russell Frank

The weeds told the world we were gone. When we pulled up to our house after 40 days on the road, we saw dozens poking through the seams in the walkway and the cracks in the driveway. If we were still out west, there would have been tumbleweeds.

Normally, it feels good to be home after a long journey, just as it feels good to get outta Dodge when you’ve been town-bound for a while. Having arrived on a Saturday, I thought I’d use the weekend as a buffer, and get serious on Monday. The weeds, though, yanked me out of my vacationer’s “what do I feel like doing?” attitude and into “what should I be doing?” Fashion.

I immediately unpacked the car, and then my bags.

Next, I tore through the mail — 50 pieces, and those were just the ones addressed to me. Most were solicitations by lenders, insurers and non-governmental organizations. A couple were bills. No checks, alas.

In the morning, I pulled weeds. Then, to reward myself for my diligence (and ease my aching back), I looked at the cartoons in a stack of New Yorkers while watching a ballgame. Having thus braced myself, I turned to our trip log, to see how much money we spent.

Tracking expenses was a totally out of character pursuit. Throughout my adult life, my approach to money management has been to avoid thinking about it. “Avoidance,” the shrinks tell us, “is typically considered a maladaptive behavioral response to excessive fear and anxiety.”

I wish I could say our trip log was the result of years of therapy. In fact, I was just curious to see if I was correct when I calculated that driving to California and back would be cheaper than flying and renting a car. I think I was, but I haven’t studied the credit card statements yet.

We tracked our travels in a big notebook with the words “Notes on Life” emblazoned on its black cover. We bought it at the end of 2014, intending, as I wrote at the time, “to grab hold of life events large and small” throughout the year to come.

We kept it up for the first 11 days of 2015, missed a couple of days, returned to it, and gave up after Jan. 26. Most of the entries were about how cold it was. Last one: “Snowed all night and on through the day.”

We tried again on New Year’s Day 2019, this time making it discontinuously, to Feb. 12. Knowing what a poor diarist I am (I’d rather write columns), we set a low bar for the trip log: Keep track of Gas, food and lodging expenses, and maybe, if it doesn’t overtax our road-weary brains, jot down the day’s highlights and lowlights.

Of lowlights, I’m happy to report, there were none. No car trouble, no medical or dental crises and nothing, not even a phone charger, left behind despite all the times we packed and unpacked, plugged and unplugged.

Highlights of the return trip included a picnic on Sonora Pass (elevation, 9,623 feet); dinosaur tracks in Red Fleet State Park near Vernal, Utah; anniversary dinner in the Haymarket District of Lincoln, Nebraska; an architecture boat tour of Chicago; and of course, return visits with friends and fam along the way.

As for the expenses: the good news, for those hoping to squeeze in a road trip before summer’s end, is that what went up has come down, somewhat. The most we paid for gasoline was $6.50/gallon at a station in South Lake Tahoe on July 8. The least: $3.90 in Iowa on July 28.

All told, we spent $433 on fuel getting to California over 10 days (there were some side trips), and $288 coming straight back (mostly) in seven days, with another $146 spent tooling around California for a couple of weeks. Total: $867, which is way less than airfare+car rental would have been.

Of course, one must sleep and eat on a multi-day journey, but we mostly stayed with friends and family, who mostly fed us, so those costs were minimal.

My advice: Stay on good terms with everyone you’ve ever known, in case you pass through their town someday and need a place to crash.

What blew up the budget was renting Airbnbs large enough to accommodate all our children and grandchildren for eight nights, but getting all of us together for the first time in a decade was the main point of the trip.

On the first day, when all 13 of us converged on a house in Columbia, California, I had a pang of doubt: Had we grossly overestimated our collective tolerance for each other’s company?

We didn’t. It was the loveliest of times. I don’t know where or when the next family reunion will be, but the consensus was clear: We should do it more often.

Next time, though, we’re flying.

Receive all the latest news and events right to your inbox.