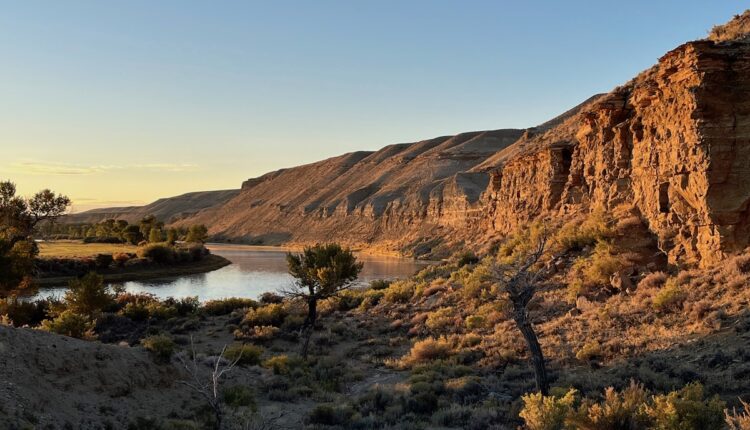 Upper Colorado River Basin states, including Wyoming, are looking for agricultural irrigators, municipalities and other water users interested in a volunteer program that pays them to leave water in streams flowing to the troubled Colorado River.

But with just two weeks left to enroll in the System Conservation Pilot Program, water users still have myriad questions regarding eligibility, how water savings are measured and what participation in the program might mean to their operations.

Given the short timeframe, the Upper Colorado River Commission, and the Wyoming State Engineer’s Office, which oversees the program in Wyoming, are urging interested water users to submit project proposals by the Feb. 1 deadline, even if they’re unsure whether their water savings plans qualify.

“We can still take incomplete applications by Feb. 1, and we’ll work with you to complete those, finalize them and get you into the system,” UCRC Deputy Director Sara Larsen said during a public question-and-answer webinar Wednesday.

The UCRC staff, along with state-level water officials, will verify qualifications and otherwise help applicants complete their proposals — post-submission, if necessary — in order to enroll as many participants as possible, according to the commission.

Successful applicants for the 2023 program will be notified by the end of February.

The SCPP is one of five short-term strategies that Upper Colorado River Basin states — Wyoming, Colorado, Utah and New Mexico — have offered to help meet a challenge by federal officials to conserve 2 million to 4 million acre-feet of water in the over-taxed system this year.

The UCRC announced a call for SCPP proposals Dec. 14 with a filing deadline of Feb. 1.

The quick turn-around stems from intensifying drought conditions that helped drain Lake Powell and Lake Mead — the two largest reservoirs on the Colorado River — to historic lows this past summer, threatening water availability for some 40 million people who depend on the river. Interior Department Assistant Secretary for Water and Science Tanya Trujillo announced drought response actions in May intended to maintain hydropower generation at Powell and Mead, which included taking extra releases from Flaming Gorge Reservoir on the Wyoming-Utah border.

“More needs to be done as the system reaches critically low water levels,” Trujillo testified before the US Senate Committee on Energy and Natural Resources in June. “The system is at a tipping point.”

Though Wyoming and its upper basin partners didn’t commit specific water-saving volumes in response to the Interior Department’s call for conserving 2 million to 4 million acre-feet of water this year, the UCRC put forth a 5-point plan. The SCPP is the first to be implemented.

This diagram shows water levels among major reservoirs in the Upper Colorado River Basin as of Jan. 17, 2023. (Bureau of Reclamation)

“Upper [Colorado River Basin] states have made no commitment with regard to the number of [SCPP] projects or target volumes or anything other than adapting to the interest from willing partners among water users and tribes in the upper basin,” UCRC Executive Director Chuck Collum said during the Wednesday webinar.

Addressing the short turn-around for SCPP proposals, applications don’t “have to be perfect,” Collum said. “But it needs to be in the hopper [by Feb. 1] so we can work with you to refine it.”

The UCRC and Wyoming State Engineer’s Office, however, are not beginning from square one. Wyoming enrolled a couple dozen water users in the program’s initial iteration from 2015 through 2018, and found exponential interest among irrigators — particularly in the upper reaches of the Green River and its tributaries, according to state officials.

To qualify for the SPCC in Wyoming, a water user must have a valid water right within the Little Snake or Green River basins and demonstrate that that right has been exercised in recent years, according to state officials. Participants are credited only for voluntary reductions of “consumptive use,” which is described as Colorado River-bound water “that can be estimated or measured,” according to the UCRC.

Flaming Gorge Reservoir, which receives water draining off 15,000 square miles of western Wyoming, was more than 30 feet below its maximum height in this December 2022 image. (Mike Koshmrl/WyoFile)

In the case of industrial and municipal water users, consumptive use is generally measured by determining how much water is diverted and not returned to the river system. Water reuse and recycling may qualify, however, according to the UCRC. For agricultural irrigation operations, consumptive use, generally, is measured by determining how much diverted water is consumed by crops.

For example, an irrigator might divert 10 acre-feet of water but 2 acre-feet returns to the system. Water officials would credit the irrigator for volumes of water allowed to flow downstream that would otherwise normally have been consumed.

For now, the UCRC envisions a “fixed term” compensation of $150 per acre-foot of water under the SCPP in 2023, although it may consider higher rates based on circumstances, according to the agency’s request for proposals. The UCRC secured $125 million from the Inflation Reduction Act to support the program — an amount that water officials say is more than enough to cover payments and expenses in 2023.

Priority for SCPP proposals in 2023 will be given to “projects that are likely to mitigate impacts of the ongoing drought,” larger volumes of water to be conserved and the ability to verify water savings, according to the request for proposals.

Further details about how the program works in Wyoming and what qualifies can be found on the Colorado River Working Group’s website.

It takes 48 from Kyrie Irving, but Nets get first win without Durant (VIDEO)