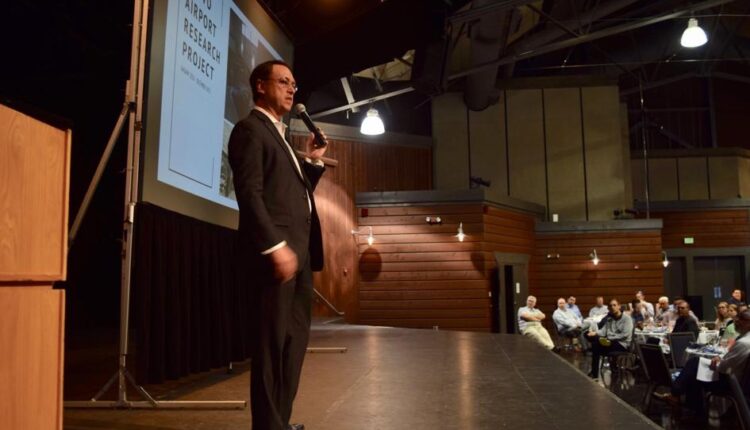 Fugal, chairman of Colliers International in Utah, bought the mysterious ranch in Uintah County in 2016 that has been at the center of folklore stories about so-called paranormal activity for decades.

The History Channel show “The Secret of Skinwalker Ranch,” which premiered in March 2020, follows Fugal and a team of scientists and researchers as they investigate the property. The first episode of the series’ second season premiered on May 4th.

During a North Utah County Chamber Alliance event on Show Barn at Thanksgiving Point Wednesday, Fugal spoke about the property’s history, including the first reported case of cattle mutilation in the early 1900s.

Fugal, who previously ran a private laboratory at Provo Airport studying theories of gravitational physics, said the audience was “skeptical” before buying the property. He said he told former owner Robert Bigelow that he would call in his own scientists to “expose” the paranormal activity on the ranch.

“So I was obviously intrigued,” said Fugal, “even though I was a skeptic. And I fully expected that I wouldn’t see anything. “

Fugal said he “never wanted to reveal my identity” and didn’t want it to divert attention from his real estate business, adding that he never expected his research to turn into a TV show.

When purchasing the ranch, Fugal said he installed cameras, weather sensors, and other tools “to find out what the hell was going on and to document the truth with scientific accuracy and discipline.”

“We are not here to believe or not to believe. We’re here to watch, ”he said. “Much of it is really observational science.”

He showed the audience a picture his team had taken on a drone, showing what he called a “bright, glowing object” appearing over a mesa, an object he likened to the Millennial Falcon in Star Wars.

Fugal said his team also observed a 50-foot-long silver bowl that “moved back and forth like it was watching us and then within 20 seconds it was gone”.

“It was gone in no time,” he said. “Undeniable. This wasn’t just something that flashed in the sky. It was right in front of us.”

According to Fugal, the Skinwalker Ranch can be a dangerous place, announcing to the audience that several crew members have been hospitalized with strange illnesses or conditions.

Fugal said he is often asked what he thinks is causing the strange activity: extraterrestrials, multidimensional phenomena, or spirits. “And my honest answer is, ‘Yes. All of the above, ”he said.

He continued, “We believe there is enough evidence … that there may be portals on the property that allow certain phenomena to occur and go back and forth.”

Fugal said he was also asked if his belief in paranormal activity at the Skinwalker Ranch contradicted his belief as a member of The Church of Jesus Christ of Latter-day Saints.

“The honest truth is ‘no’,” he said. “I was raised to believe that there are worlds without numbers, that we are not alone in the universe. And if there’s anything that really proves that to some extent and in some strange way promotes faith, that’s what we’re doing out here. “

Connor Richards covers government, environmental, and South Utah County for the Daily Herald. He can be reached at [email protected] and 801-344-2599.