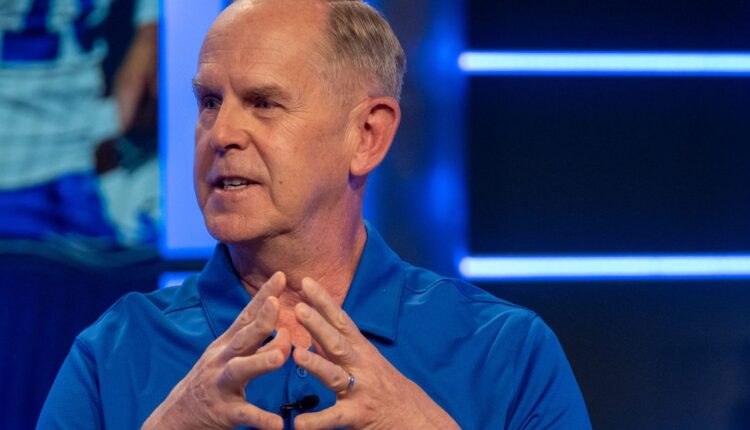 Plus, Holmoe takes aim at NIL and why BYU-Utah are tethered together regardless of conference

Negotiations between BYU and Notre Dame are ongoing over the finer details of their game in Las Vegas this season. Among the topics being discussed is ticket distribution.

While most of those talks are cloaked behind the veil of two private institutions, BYU athletic director Tom Holmoe did indicate why there has been such a delay in ticket sales for BYU fans.

This game on Oct. 8 will act as Notre Dame’s home game, Holmoe said. It will be part of the Irish’s Shamrock Series, where Notre Dame plays in marquee venues across the country. In years past, Notre Dame has played at Yankee Stadium, Soldier Field and Fenway Park.

But, because it is not a true neutral-site game, Notre Dame will control the ticket distribution. It will also give their fans the first crack at purchasing tickets. The exact split of those tickets is being discussed, but Notre Dame will likely have the controlling share.

“It’s a Notre Dame home game, for sure,” Holmoe said. “That is how we were able to get in there and get them to come to Vegas to play.”

The original contract stipulated Notre Dame would come to Provo to play a return game. BYU last played at South Bend in 2013. However, it was always more likely Notre Dame would pay a buyout to the Cougars rather than play a true road game in Utah.

Holmoe, though, preferred not to take the buyout and waited for Notre Dame to figure out the details of actually playing a game.

The Irish landed on playing at Allegiant Stadium in Las Vegas, as part of their home-game package.

“There were some things in the contract they had to have in order for them to play the game,” Holmoe said. “[Tickets] were one of the things we had to give up.”

Most Shamrock Series ticket distributions have heavily favored Notre Dame. However, last year Notre Dame played Wisconsin at Soldier Field and it was closer to a 50-50 split on tickets between the home and visiting teams.

There is still no timeline for when tickets will go on sale.

• Holmoe was asked if name, image and likeness has gotten out of hand at media day last week. His response? “Yes.” Here are his full comments.

• BYU and Utah are scheduled to meet six times before 2030. It isn’t likely they will play every game, but Gordon Monson writes they should try to play as many as possible.

• BYU’s first depth chart is out. Here are five observations from the first data point of the year.

What You Need to Know About Monkeypox

Idahoan’s Painful Prepare To Hit The Road This Weekend