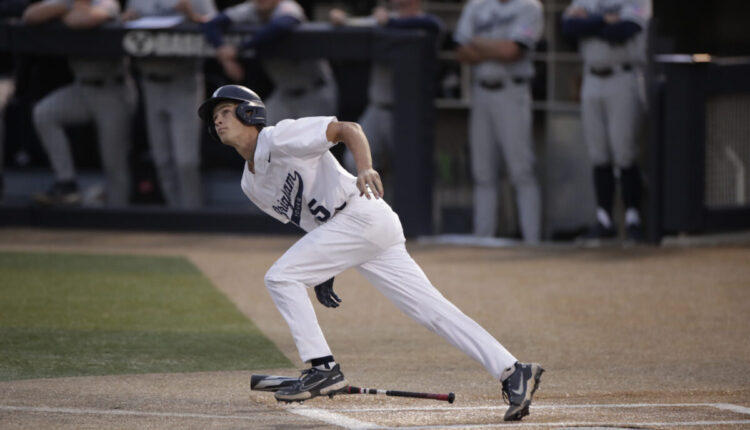 BYU’s Ozzie Pratt watches the ball after taking a swing against San Diego in a West Coast Conference baseball game at Miller Park on Thursday, April 21, 2022.

The 52-game schedule features 27 games in West Coast Conference play, and a series with each of the three in-state NCAA Division I baseball schools. The Cougars will play three games versus long-time rival Utah, three with cross-town foe UVU and a home-and-away set with Utah Tech (formerly Dixie State).

The home schedule also includes two non-conference series with Omaha, who BYU played in Nebraska during the 2021 season, as well as UNC Greensboro, who will be making its first trip to Provo.

BYU opens the 2023 season on Feb. 17 with eight-straight games in Louisiana. The Cougars will first travel to Ruston to take on Louisiana Tech in a four-game set, Feb. 17-20. The team will then head three hours south to Lafayette for a four-game series with the Louisiana Ragin’ Cajuns, Feb. 23-25. Both teams participated in regionals at the NCAA Baseball Championship in 2022.

On Feb. 28, BYU opens its home schedule with the first of three games versus UVU, before hosting Omaha, March 2-4 at Miller Park.

Following a March 7 game at Utah Tech in St. George, the Cougars are off to Omaha, Nebraska to take on Creighton in a three-game series at Charles Schwab Field Omaha. The 25,000-seat stadium is the official site of the College World Series.

BYU returns to the friendly confines of Miller Park on March 14 to take on Utah in the first of three games during the 2023 season, before heading to Los Angeles to open conference play versus Loyola Marymount, March 16-18.

In addition to LMU, BYU will face Gonzaga (March 30-April 1), Santa Clara (April 13-15), San Diego (May 4-6) and Pacific (May 11-13) on the road in WCC play. The Bullfighters and the Bulldogs qualified for the NCAA Baseball Championship last season.

The Cougars take a break in the middle of conference play to host a three-game series with UNC Greensboro, April 20-22. It will be the first-ever meeting between the Spartans and the Cougars in baseball. UNC Greensboro is coming off a season that saw them play in the 2022 NCAA Baseball Championship.

Midweek games for the 2023 season include three contests with Utah–two at Miller Park on March 14 and April 18 and one at Smith’s Ballpark in Salt Lake City on May 9. BYU also has three games with UVU on Feb. 26, March 21 and March 28, as well as two games with Utah Tech on March 7 and April 11. The Cougars have single-game road contests at Washington State on April 3 and at UC San Diego on May 2.

The WCC Tournament is scheduled for May 24-27, at Banner Island Ballpark in Stockton, California, home of the Stockton Ports a Single-A affiliate of the Oakland Athletics. The NCAA Tournament is set to begin on June 15.

BYU is coming off a 33-21 season, good for a fourth-place finish (16-11) in the WCC and a trip to the WCC Tournament. The Cougars were 10-5 versus Power Five programs in 2022, including a three-game sweep at Arizona State, three victories at Nebraska, as well as wins over No. 4 Oklahoma State, Ohio State, Utah and Washington State.

The Cougars are led by head coach Trent Pratt, who enters his first full season at the BYU helm. In 25 games as the interim head coach in 2022, Pratt guided the Cougars to an overall record of 16-9 (.640) and was 10-6 (.626) in WCC contests, including nine wins in the final 10 regular-season games.