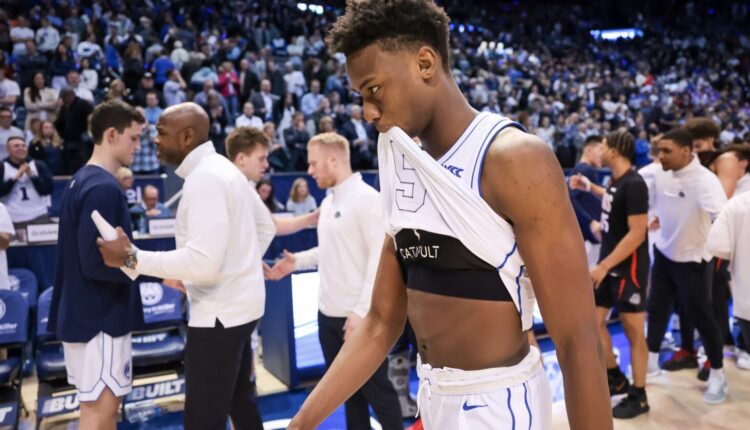 SAN FRANCISCO — To say that BYU coach Mark Pope was frustrated and disappointed after Saturday’s 82-74 loss to San Francisco at War Memorial Gym would be a Golden Gate Bridge-sized understatement.

How disappointed was Pope Saturday? Let him count the ways.

“It’s a long list,” he said. “I thought our effort and energy wasn’t what we expect as a team. I thought we were just supremely outcoached. I felt like our fight was lacking,” he said.

Well, that pretty much covers it, in a game that saw the Cougars trail by as many as 16 points in the second half.

Yes, it was a forgettable night for BYU in its final visit to War Memorial Gym. And it was a rough weekend in the Bay Area for the Cougars, who got swept by Santa Clara and USF.

When asked what he attributed to his team’s shoddy performance, Pope said, “Poor coaching on my part.”

Pope spent a long time in the locker room with his players before emerging to talk to reporters after the setback.

What did he say to his team?

“I told them I’d do a better job,” Pope said. “Together, we’ve got to learn the price of winning, and that’s not easy. It’s part of the process we go through.”

Statistically, here were the issues that led to the loss.

“We started out with just a total dearth of all shell principles,” Pope said about his team’s 3-point defense. “The start to the game was surprising and super disappointing. (The Dons) got going and then they made some tough shots, which is what they do. They shoot the fourth-most amount of 3s in the country. They live on the 3-point line, they really spread the floor and they can shoot it one through five.

Meanwhile, BYU was led by Rudi Williams. After scoring 24 points in Thursday’s loss at Santa Clara, had a season-high 28 points Saturday, with 21 of those coming in the second half.

Gideon George, who had gone 0 of 11 from the field in his two previous games, scored 12 points on 5 of 9 shooting, to go along with five rebounds.

But two starters, Dallin Hall and Spencer Johnson, struggled offensively. Hall went scoreless and had five turnovers in 11 minutes of action, and Johnson finished with four points but he didn’t score his first basket until the 1:42 mark of the second half.

USF took control of the game in the opening minutes with a 10-0 run after knocking down some early 3-pointers. The Dons had four of them in the first five minutes and grabbed an 18-7 lead.

BYU spent the entire second half trying to dig its way out of that hole. The Cougars trimmed the deficit to six points at 42-36, but Roberts, Shabazz and Meeks kept hitting big shots to keep BYU at bay.

“Defensively, we weren’t there, we weren’t present and they hit a lot of 3s,” Robinson said. “And they got to the free throw line a lot. We didn’t execute.”

Did Thursday’s loss at Santa Clara have a lingering effect on Saturday’s effort?

“Not really,” Robinson said. “We’ve just got to move on. Next game mentality. We came into this game feeling fresh and we didn’t win.”

And, as Pope said multiple times, the result was another disappointing loss.

TIP-INS: Robinson has made a 3-pointer in 11 straight games … Traore reached double figures for the 16th time this season … BYU is now 6-2 in Saturday games this season.