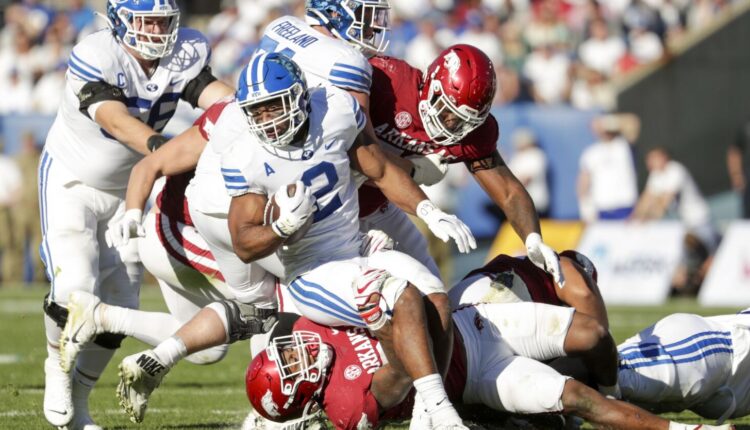 The never-ending question about whether BYU’s football program is ready physically and from a talent standpoint to join the Big 12 continues, although it took a serious hit in Week 7 of the college football season.

Meanwhile, the Cougars’ performance Saturday afternoon against a Southeastern Conference middleweight provided one answer loud and clear from the LaVell Edwards Stadium rooftops: BYU clearly couldn’t compete in the SEC.

Not even close. Any suggestion that it could is pure hogwash.

Speaking of Hogs, the SEC’s middling Arkansas Razorbacks rolled in to LES with a 3-3 record and a three-game losing streak, but they still easily had enough offensive firepower — and just enough defense despite a banged up secondary — to thoroughly trounce the Cougars 52-35 in front of a sellout crowd of 63,470 and a national television audience.

“So there are quite a few mistakes that I think are on the coaches, and myself, and then mistakes that I think players made. We will fix those, and get to work, with a tough game next week, on the road, going to the East Time Zone (against Liberty). So we don’t have a lot of time to worry about this game.” — BYU football coach Kalani Sitake.

In giving an opening comment, and then answering only five questions, Sitake repeated what he has said after previous losses, and sometimes after lackluster wins: “The (poor) execution is on the coaches to get it done, but there is some responsibility on the players.”

For example, Sitake said the fumbled snap on 4th-and-inches from the BYU 34 was not supposed to be snapped at all.

Arkansas recovered, then scored a touchdown after a first-and-25 situation to take a 24-21 lead with 3:39 left in the first half.

If a 17-point blowout can have a turning point, that was it.

Connor Pay started the first six games at center for the Cougars, but Joe Tukuafu went the whole way at that spot against Arkansas.

“I don’t know how to hide that one,” Sitake said, while not naming the player who made the mistake. “… If we didn’t get that (penalty) we were going to take a timeout and punt the ball. I felt like I didn’t want to give them that short of a field.”

Coincidentally, officials had originally spotted the ball to give BYU a first down after Hall’s 12-yard run on third down, but replay officials asked for a better look and overturned the spot on the field.

Bottom line to this mess, though, was that the Hogs hogged the ball, and the Cougars couldn’t stop it.

Arkansas finished with a whopping 644 yards of offense. It was the first time BYU has given up more than 600 yards since Toledo had 692 in September of 2016, Sitake’s first year.

“We will fix those and get to work with a tough game next week on the road, going to the East Time Zone (against Liberty), so we don’t have a lot of time to worry about this game.”

With Jefferson returning to action after missing last week’s loss to Mississippi State with a concussion, BYU had no answers for the standout QB or his vast array of weapons.

If there was a play that was emblematic of the contest for the Cougars, it was the one after Hudson Clark intercepted Jaren Hall to give Arkansas the ball.

On 3rd-and-11, four BYU defenders — John Nelson, Pepe Tanuvasa, Bywater and Tyler Batty — had a chance to sack Jefferson for a 10-yard loss, but he escaped and found tight end Trey Knox for a big gain.

Sitake said he was most concerned with Arkansas’ 12 of 15 conversion rate on third down — some of which came due to shoddy BYU tackling against the type of athletes the Cougars have rarely faced as an independent.

“Yeah, I’m really focused on third downs. That’s the biggest issue to me,” Sitake said. “… I mean, they converted on 12 out of 15. That’s not good defense, so that’s my main area of ​​concern.

“Then the other area of ​​concern is the fundamentals and tackling and mistakes on the field. We had some guys not doing their 1/11th. That is on the coaches to make sure that gets done and on the players to execute their assignments.”

After fumbling away their first possession and punting on their second, the Hogs scored on eight straight possessions, seven touchdowns and a field goal, and rolled up 367 yards in what was supposed to be a crossroads game for both programs.

Moving upward at midseason, the Hogs will return to the South with a solid road victory, while the Cougars, trending downward, will not be able to finish with a winning record against Power Five teams this season, having already lost to Oregon and Notre Dame and defeating Baylor 26-20 in double-overtime, a victory that seems worlds away now.

BYU’s problems extend well beyond a 17-point loss — it could have been more, but the Cougars stopped the Hogs inside their 5-yard line four times in the final minute — to a team that started 3-0 and was ranked No. 10 nationally before the losing skid to ranked teams.

BYU’s defense is in shambles. There’s no way to sugarcoat it.

The annual culprit — inability to get off the field on third down — raised its ugly head for the second straight week against a national brand.

After allowing Notre Dame to go 11 of 16 on third down last week, BYU watched almost helplessly as Jefferson and company dominated like it hasn’t before this season.

The sensational QB was finally taken out of the game — perhaps a play too late — after he stayed down for a while when his head smacked the LES turf at the 2-yard line.

Credit BYU’s defense for stopping Arkansas to preserve the final score. But where was that when the Hogs started the drive on their 26 with 10 minutes, 29 seconds left?

“I didn’t feel like we were out of the game completely until the very end when they were grinding the clock,” Sitake said.

“They took a timeout, and we asked the guys to toughen up a little bit, that this is going to be your identity and we challenged them: this is what you are going to hang your hat on. I don’t care what the score is.”

Jefferson finished 29 of 40 for 367 yards and a career-high five touchdown passes, with no interceptions, for a passer rating of 190.8.

His counterpart, BYU’s Jaren Hall, played reasonably well, but threw that costly interception in the first half when the Cougars were desperately trying to hold serve in the then track meet.

The way the BYU defense was playing, the Cougars’ offense couldn’t afford to blink on a picture-perfect autumn afternoon in Provo.

Instead, they did it three times. In addition to the fourth-down fumble and the pick — Hall’s third and second in two games — they posted a three-and-out late in the third quarter when they were down 45-35 and trying to match a 12-play Arkansas touchdown drive.

Naturally, after that 42-yard punt by Ryan Rehkow, it took Arkansas just two plays to score and put the game out of reach.

It was that kind of day for the defenseless Cougars.