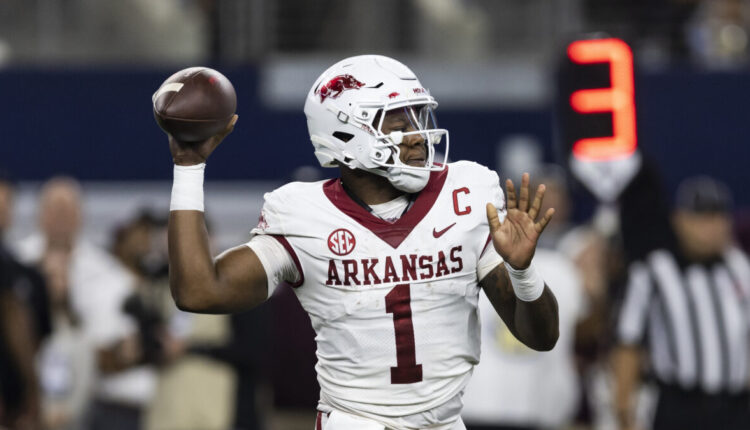 Here’s our weekly power ranking of BYU football’s opponents with a look at their schedules and matchups.

Last result: Bo Nix passed for 265 yards and three touchdowns to lead no. 12 Oregon to a 49-22 victory against Arizona.

Last result: The Irish rolled up nearly 500 yards of offense and jumped out to a 25-6 lead against No. 16 BYU but needed a key fourth-down stop in the final three minutes of a 28-20 victory.

What’s up? Tight end Michael Mayer caught 11 passes for 118 yards and two touchdowns in the victory against BYU. … Notre Dame leads the overall series with Stanford 21-13 and has won three straight games by an average of 24.3 points per game.

What’s up? West Virginia’s last game was a 38-20 loss to Texas on October 1. … The Mountaineers lead the overall series with Baylor 6-4 but the Bears won last year in Waco 45-20.

Last result: Playing without injured quarterback KJ Jefferson, the Razorbacks couldn’t keep up with No. 23 Mississippi State in a 40-17 loss.

What’s up? Arkansas backup quarterback Malik Hornsby threw for 234 yards and a touchdown on just eight completions and ran for 114 yards on just eight carries against Mississippi State, but also threw two interceptions. … This is the first meetings for the Razorbacks and the Cougars.

What’s up? Gardner-Webb ran for 306 yards and posted its first shutout in league play since 2004 with a 48-0 Big South victory against Robert Morris. … This will be the first meeting between the Flames and the Colonials.

Last results: George Holani ran for 157 yards and caught a touchdown pass in a 40-20 victory against Fresno State.

What’s up? Ashton Jeanty added 109 rushing yards and a pair of touchdowns for the Broncos in the victory against Fresno State. … Boise State’s next game is Oct. 22 at Air Force.

Last result: East Carolina went scoreless in the second half of its 24-9 loss to Tulane.

What’s up? Brandon Thomas ran for two scores and Memphis scored all of its points in the final 17 minutes in a 24-3 victory against Tempe. … East Carolina leads the overall series with the Tigers 16-8 and has won the past two meetings, including 30-29 last season in Memphis.

Last result: Tre’Shaun Harrison caught a 56-yard touchdown pass from Ben Gulbranson with 13 seconds to play to lift Oregon State past the Cardinal 28-27.

What’s up? Notre Dame piled up nearly 500 yards of offense and had a critical fourth down stop late in its 28-20 victory against BYU. … The Irish lead the overall series with Stanford 21-13, with the last victory for the Cardinal coming in 2017 (38-20 at Stanford Stadium).

What’s up? Cameron Settle’s 38-yard interception return for a score finished off Wyoming’s victory against New Mexico. … The Cowboys next game is October 22 against Utah State.

Last results: Quarterback Cooper Legas accounted for two of these three touchdowns in the fourth quarter to help Utah State past Air Force 34-27.

What’s up? The Rams’ Michael Boyle kicked the game-winning field goal on an untimed down at the end of a 17-14 victory against Nevada. … Colorado State leads the overall series with Utah State 39-36-2 but the Aggies have won the past three meetings, including a 26-24 win in Logan last season.

Last results: The Bulls led No. 24 Cincinnati three times, including 24-21 early in the fourth quarter, but couldn’t hold on in a 28-24 loss.

What’s up? Michael Pratt threw for 326 yards and two touchdowns while running for a third as the Green Wave topped East Carolina 24-9. … Tulane leads the overall series with South Florida 2-1, winning last year in New Orleans 45-14.

What’s up? UNI drove into Illinois State territory in the final minute of play but came up empty in a 23-21 loss. … This is the first meeting between Utah Tech and Northern Iowa.

Trader Joe’s will open a fourth store in Utah