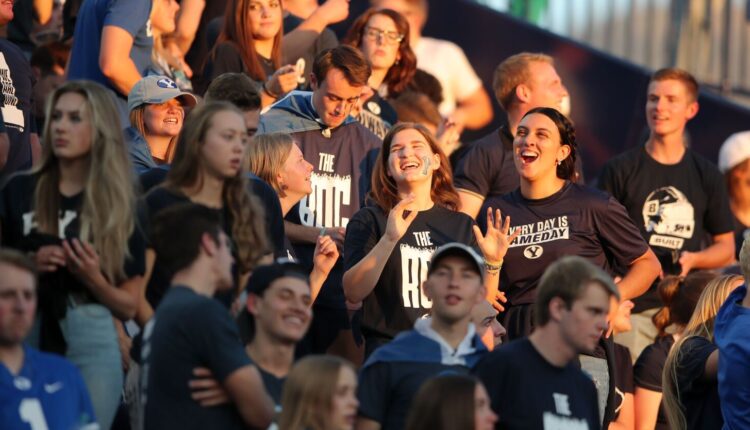 The two attractions will fill LaVell Edwards Stadium in back-to-back events, though separated by 80 days. McGraw is the headliner for Saturday’s Stadium of Fire celebration. The Cougars will fill up the place on Sept. 10 in the home opener against Baylor.

McGraw played for his high school team in Tennessee, and it wasn’t until a knee injury in college that he altered his dream from participating in sports to entertaining millions in and around the sports they love through music, writing and theater.

As an actor, McGraw found two roles to keep him close to football. He was a co-star to Billy Bob Thornton in the 2004 football flick “Friday Night Lights.” His biggest role was playing Sandra Bullock’s ever-patient husband in “The Blind Side” in 2009.

BYU has a unique football history, too, as the only Division I program in Utah to win a national championship, a Heisman Trophy, a Doak Walker Award, two Outland Trophy Awards, a Maxwell Award and have seven inductees into the College Football Hall of Fame, including former head coach LaVell Edwards.

For Saturday’s sold-out performance inside LaVell’s stadium, McGraw has selected a set list from his library of over 200 songs. He will blend his music with an evening of patriotic celebration, an F-35 flyover, and a seemingly endless supply of fireworks as Utah celebrates the Independence Day holiday.

BYU will celebrate just the opposite when fall camp opens next month. Its independence is almost history, and the Cougars can hardly wait to give it up. After roaming the uncertain wilderness outside a football conference for over a decade, BYU will officially join the Big 12 one year from Friday (July 1, 2023).

This fall represents the Cougars’ final season with an independent schedule and if McGraw could provide a set list appropriate for all 13 opponents, it might look like this:

‘Better Than I Used To Be’

The Cougars open the season Sept. 3 at South Florida. The Bulls upset BYU 27-23 at Tampa in 2019. Quarterback Jaren Hall was knocked out of the game with a concussion, and, because of a rib injury, he didn’t play in last year’s 35-27 win at Provo. Hall is eager to take the field at Raymond James Stadium to show the South Florida defense that he is “better than he used to be.”

The home opener against Baylor on Sept. 10 is a sneak preview into BYU’s future home as a member of the Big 12. The defending Big 12 and Sugar Bowl champions beat the Cougars 38-24 last year in Waco. BYU has longed for P5 status and a conference identity. As it looks today, the move should keep the Cougars happy and financially fortified for the “next 30 years” and beyond.

BYU plays at Oregon on Sept. 17. The Cougars went 5-0 against Pac-12 teams last fall, defeating Arizona, Utah, Arizona State, Washington State and USC. To keep the streak alive in Eugene, BYU must crush the cliches — “throw caution to the wind” and “put it all on the line” as if “there is no tomorrow” — kind of like living “like you were dying.”

‘The Cowboy in Me’

Wyoming visits Provo on Sept. 24 for the first time since 2010. The former Skyline, WAC and Mountain West Conference members will meet for the 79th time in a rivalry that was born in 1922. The most recent clash was in the 2016 Poinsettia Bowl which BYU won 24-21. The most storied battle was in the 1996 WAC Championship Game in Las Vegas. the no 7 Cougars beat the No. 20 Cowboys 26-23 in overtime.

Utah State kicks off in Provo on Thursday, Sept. 29, ahead of general conference weekend. This will be the 91st and final scheduled meeting between the two instate rivals to fight for the Old Wagon Wheel trophy. BYU canceled four future games with the Aggies as it prepares for the Big 12 schedule that limits nonconference games to three. No doubt the Aggies will be singing with McGraw, “Please Remember Me.”

The long-awaited game between BYU and Notre Dame is set for Oct. 8 at Allegiant Stadium in Las Vegas. While some fans contend this game should be played in Provo, the bright lights and energy of Vegas is unmatched. This has the feel of a major bowl game smack dab in the middle of the season. The fact that Las Vegas is BYU’s home away from home doesn’t hurt either. “I like it, I love it,” and as the McGraw song goes, “I want some more of it!”

‘Where the Green Grass Grows’

Arkansas brings Southeastern Conference football to Provo on Oct. 15. The SEC told the Razorbacks that scheduling BYU satisfies the league mandate of playing at least one Power Five opponent annually on its nonconference schedule. Arkansas will make its debut at the scenic Edwards Stadium, where in the mid-October sunshine, “the green grass grows.”

BYU will play at Liberty on Oct. 22. Baylor Romney threw three touchdown passes to beat the Flames in Provo 31-24 in 2019. Liberty and the town of Lynchburg, Virginia, will soon learn that despite being a long way from Provo, the nationwide Cougar following will give the visitors a “southern voice” when they take the field.

‘Just To See You Smile’

The Cougars return to Provo for a Friday night showdown against East Carolina on Oct. 28. The Pirates contributed to BYU’s seven-game losing streak in 2017 with a 33-17 win in Greenville, North Carolina. Kalani Sitake and his staff have since rebuilt the Cougars program. In just the last two seasons, BYU is a combined 21-4 and giving fans a lot to smile about.

‘Why We Said Goodbye’

BYU plays at Boise State on Nov. 5. To their credit, the Broncos have been a loyal opponent during the Cougars’ time as an independent, scheduling annual games as far out as 2037. But BYU’s admittance into the Big 12 triggered the cancellation of all of them, except for this one — the last blast on the blue turf. The series ends with shared respect and only time will tell if they ever reunite. If the Big 12 expands further, the Broncos expect to receive the first call — and BYU’s endorsement.

The Cougars’ home finale is against Utah Tech on Nov. 19. This is the kind of November matchup fans have grown to accept, but never embrace. Scheduling quality programs in November is and always has been a nightmare for BYU as an independent. The Trailblazers, formerly known as Dixie State, can only hope BYU will be “humble and kind.”

‘Down On The Farm’

BYU celebrates Thanksgiving Weekend at Stanford on Nov. 26. This will be the third meeting and the first since 2004. Stanford is nicknamed “The Farm” because it was founded by Leland and Jane Stanford on the land of their Palo Alto stock farm where the Cougars hope to find a bountiful late harvest of touchdowns.

If the Cougars become bowl eligible, they will placed in a game that is owned and operated by ESPN. This will be the last time BYU will run up against a brick wall of conference bowl affiliations. Last year, the Big 12 sent teams to the Sugar, Fiesta, Alamo, Cheez-It, Texas, Liberty and Guaranteed Rate Bowls, and had access to the College Football Playoff. The Cougars would love “something like that.”

Not sure which songs McGraw selected to sing at Stadium of Fire, but the venue will be packed with family and friends celebrating America’s independence. How BYU will fare against Baylor in the home opener is also a mystery? But family and friends will fill the stadium to celebrate BYU’s independence, which, after 12 years of defending, they will gladly concede to become a dependent in the new Big 12.

This April 2, 2017 file photo shows Tim McGraw performing at the 52nd annual Academy of Country Music Awards in Las Vegas. Saturday night in Provo, McGraw will be performing a the Stadium of Fire event at LaVell Edwards Stadium.