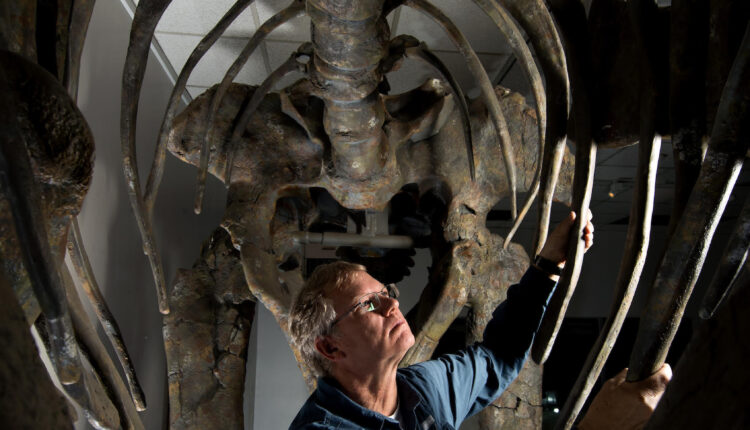 Professor, paleontologist and former museum curator Brooks Britt wanted to be a scientist since he was a young boy.

When Britt was young, he read books about entomology, astronomy, chemistry and the like, but when he was ten years old and his father gifted him a mineral collection, he thought, “Oh, this is great. I’ll for sure be a geologist now.”

Britt, living in Washington at the time, had his father drop him off at a cliff along the Mississippi River when he went to work so he could look for fossils, and “low and behold,” he said, “that thing was loaded with fossil.”

As Britt collected invertebrates and corals from the Mississippian period, he decided instead of being a geologist he would be a paleontologist.

For the next four years, Britt continued to study and learn all he could about fossils ⁠— spending the summers fossil-hunting with his cousin in Vernal, Utah.

“I told my mom, ‘I’m gonna ride my bike down to Utah. I’m gonna go look for dinosaurs.’ I knew I had some relatives there but my mom said it wasn’t such a good idea because it’s like a thousand miles away,” Britt said.

His mother convinced him to take a bus, so he took his bike apart, put it in a box and stored it on the bottom of the bus.

He and his cousin rode their bikes ten miles toward a reservoir where they found rocks that looked to be about the right age, based on the books he had read.

“Right off the bat, we found some bits of bone. They were teeny tiny but we followed those pieces and looked for forks in the tributaries that had bits of bone. It got steeper and steeper and the pieces of bone got bigger and bigger and pretty soon we were using our rock hammers to dig hands and footholds in the hill,” Britt said.

He and his cousin went to that location every day that summer, on their bikes carrying shovels, chisels and a single quart of water, and excavated fossils he still has on his desk today.

Together, he and his cousin went to the Vernal Field House of Natural History to report their findings, but found the museum could not do anything to help them, as they did not have the money or manpower.

Britt and his cousin continued working at that quarry for the next three summers, finding fossils and exploring.

Britt eventually attended a scouting jamboree on BYU campus, but does not recall learning anything about scouting, as he spent all his time on the track at the Smith Fieldhouse or at the Eyring Science Center. There he met James Alvin Jensen, or “Jim,” as he’s more commonly known.

Jensen, a high school dropout and most publicized paleontologist of the 20th Century mentored Britt. Britt would send him sketches of his findings and Jensen helped him identify them.

Days after Britt graduated high school, Jensen hired Britt to work for him at BYU.

Britt continued to meet and work with famous paleontologists, including John Ostrom and Jack McIntosh, authors of a dinosaur book he used to check out from the library growing up. McIntosh was a theoretical nuclear physicist who worked with Albert Einstein on the hydrogen bomb at Princeton . 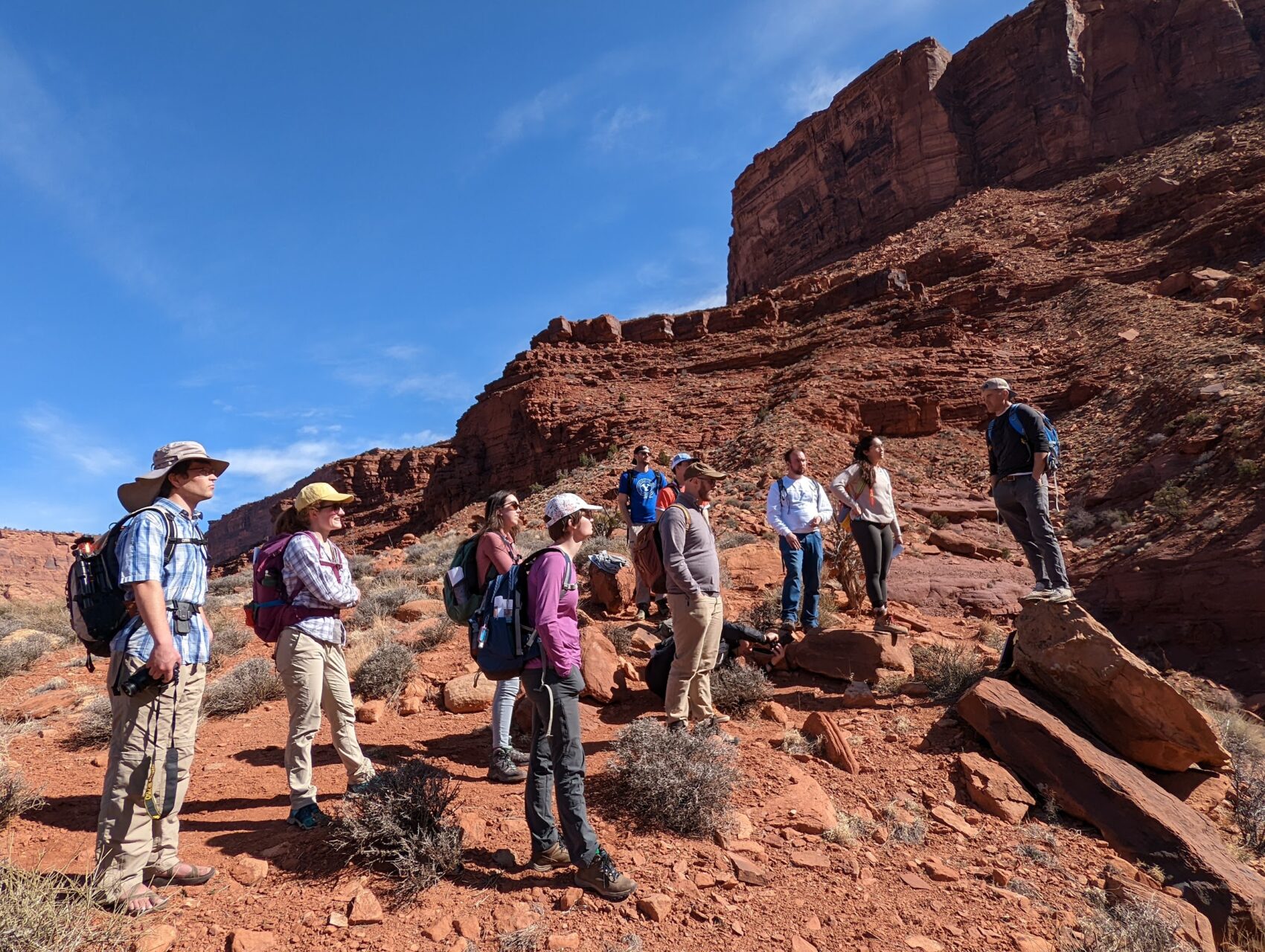 Today, Britt continues to inspire and discover with students of his own.

“Dr. Britt is one of the best professors I’ve had because he was so enthusiastic about the class and dinosaurs. He’s patient with everyone and explains things really clearly,” Hedges said.

Britt takes care to ensure his students are well cared for academically as well as prepared for the future.

“I loved going on all the field trips and watching ‘Jurassic Park’ with pizza on the last day ⁠— it was honestly life-changing. You can tell he cares about the students and is always willing to work with them,” Hedges said.

Recently, Britt took his students to the highest cliff in the continental US ⁠— a cliff with over a half-mile drop-off. 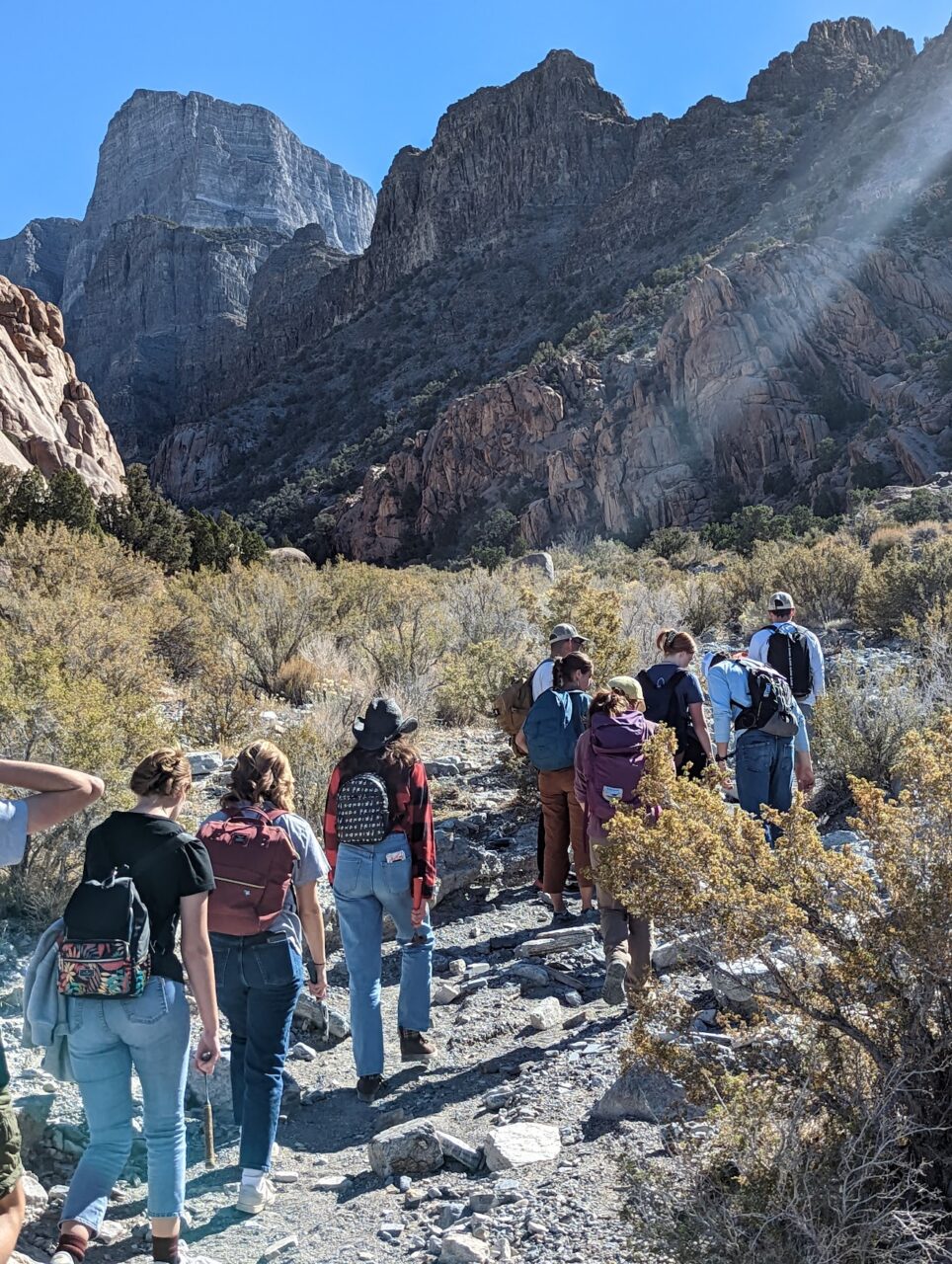 Students hike to the 170-million-year-old granite instruction at Utah’s Notch Peak.The students visited the largest cliff on the continental US (Photo courtesy of Brooks Britt)

“You can’t just go out back and not be blown away by the world we live in,” Britt said.

“Dr. Brooks was awesome ⁠— he made learning about dinosaurs fun again. I looked forward to going on field trips each week because I knew I was going to have a good time and learn new things,” Knowlton said.

Britt, throughout his career, has had opportunities to name fossils ⁠— one of which he named after his daughter. The pterosaur, Caelestiventus hanseni, is more than 200 million years old and is one of the oldest pterosaurs found.

Britt works with students both in a lab and classroom, on top of field trips. In BYU’s Museum of Paleontology, there are over 20,000 fossils students study. 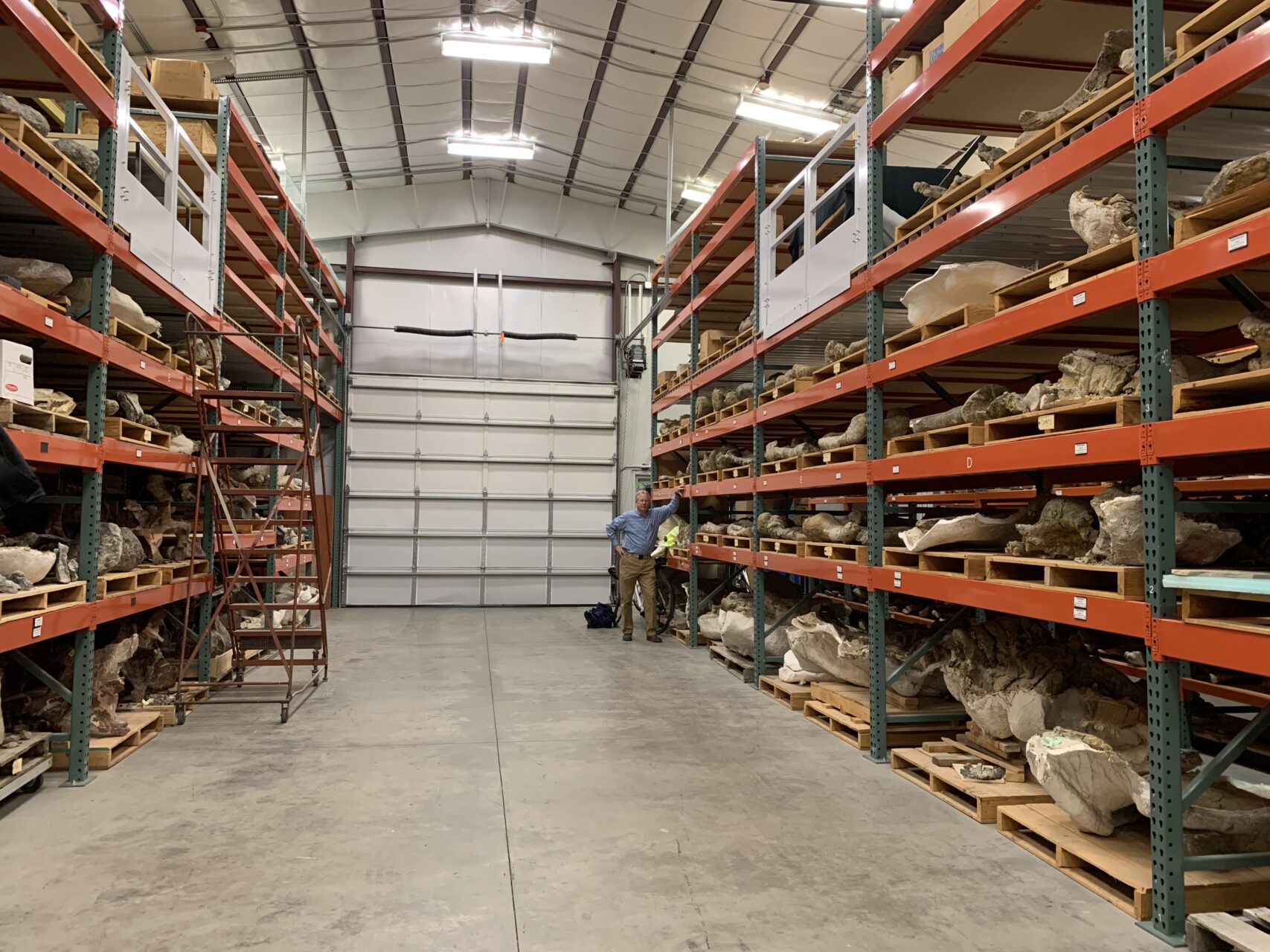 Brooks Britt stands among some of the 20,000 fossils in their lab. Britt has been working with students for 20 years. (Megan Brugger)

“My goal is to help students not be afraid of science, and to teach them what science really is. To teach them about the relationship between science and religion, and how they’re both ways of approaching the truth,” Britt said.

“He helped me understand how science supports the plan of salvation. It will go down as a class I had the best experience in,” Knowlton said.

Of Britt’s extensive career, working with students in the lab has been one of his favorite parts. 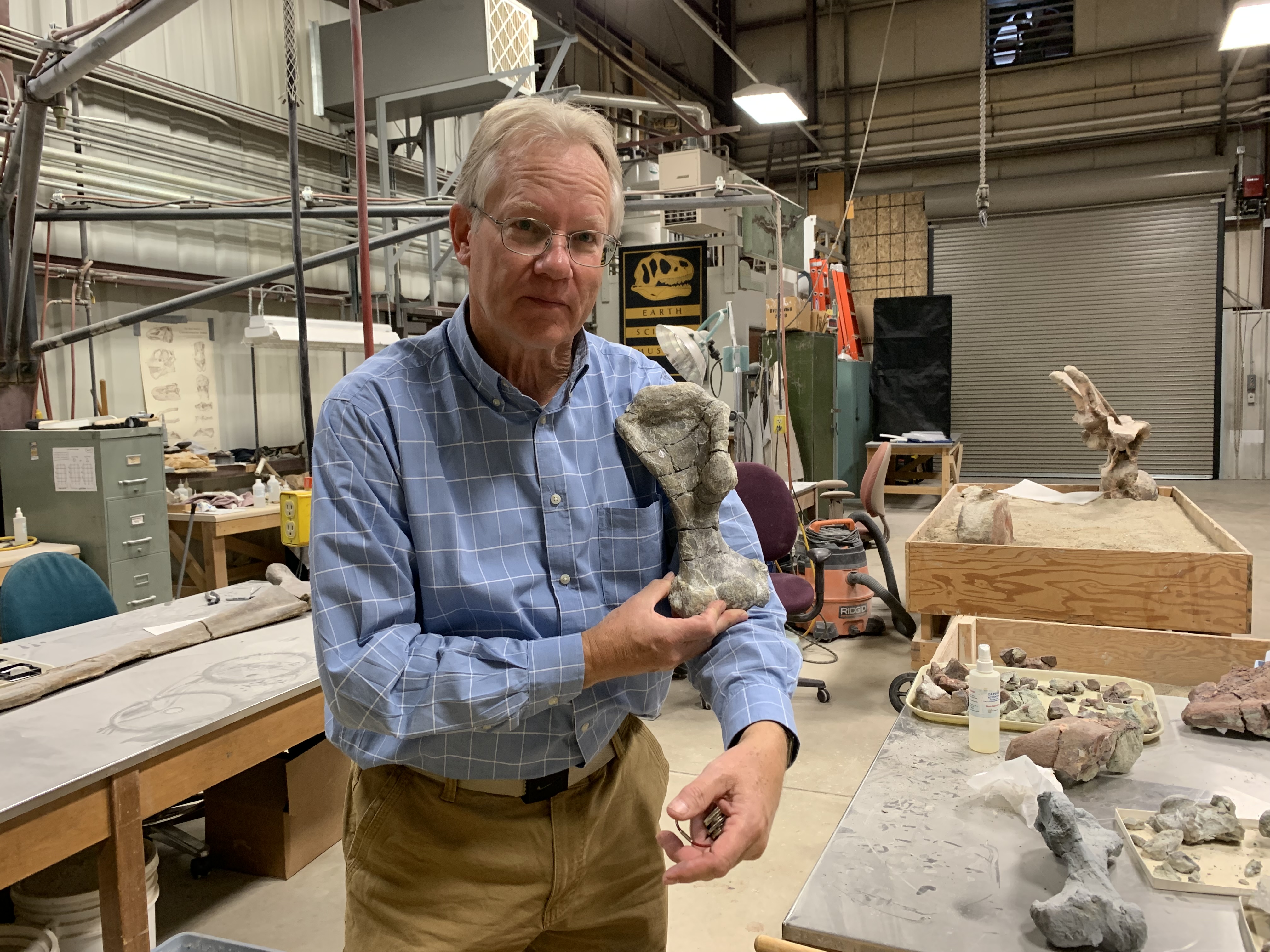 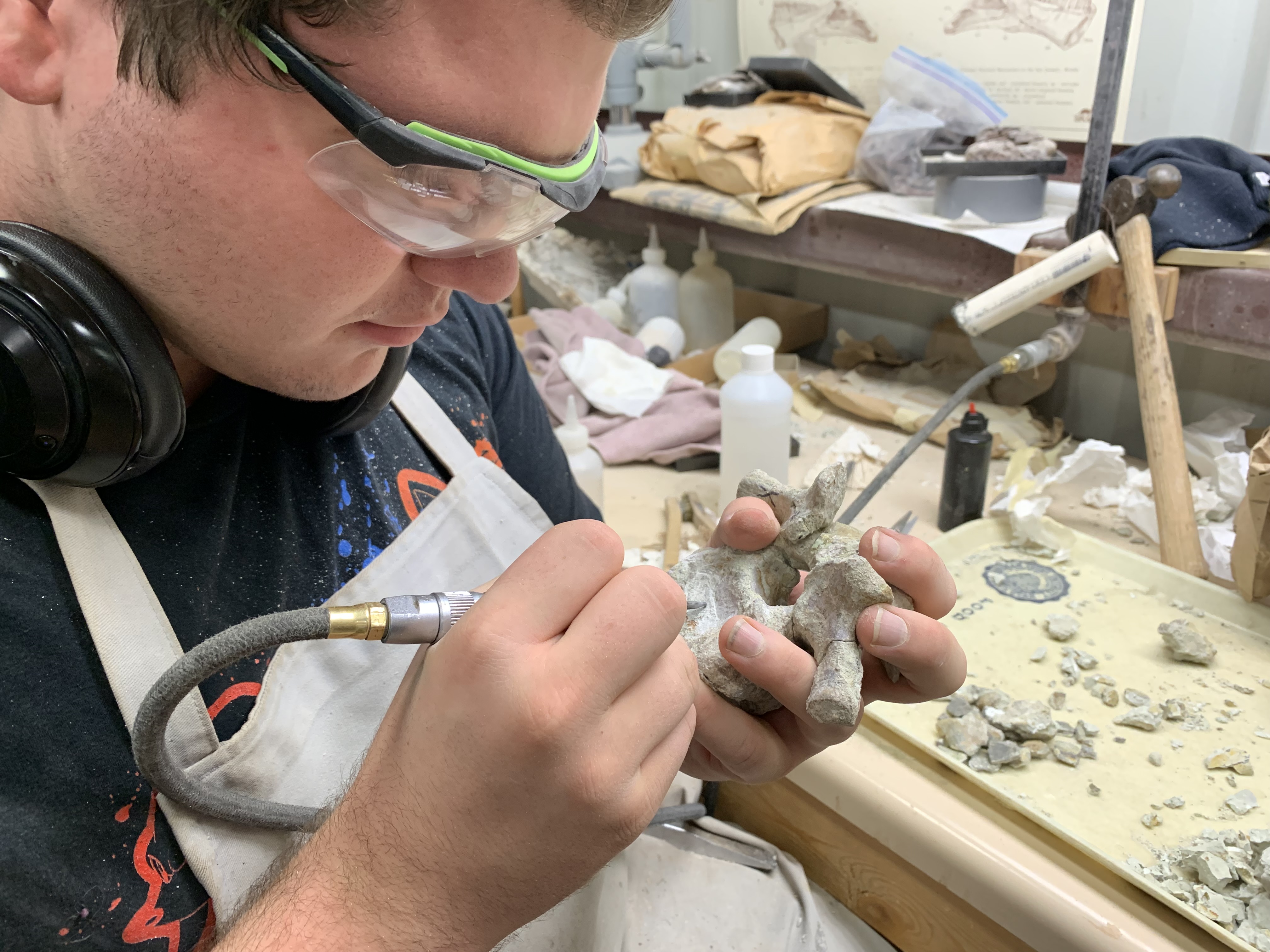 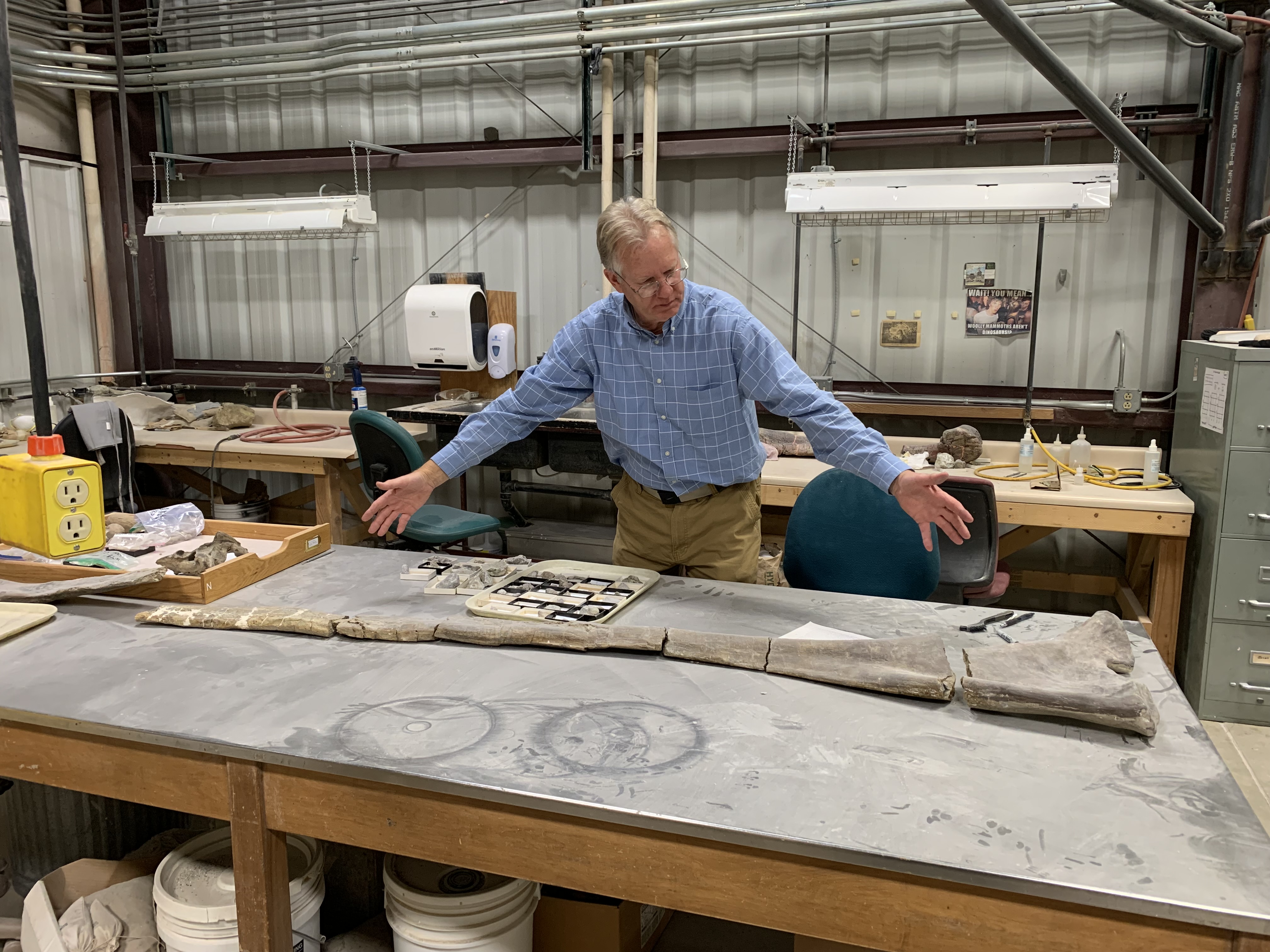 Brooks Britt enjoys working in the lab with students. The fossils are brought to the lab in a plaster and burlap cast, or field jacket, which helps immobilize little pieces in transportation. (Megan Brugger)

“Work is fun,” Britt said. “Everyone loves being out and digging things up ⁠— that’s the easy part. Working in the lab takes more skill, but once you’re at a place like this, you don’t get to do that anymore. The students get to do the fun stuff.”

Britt continued, “You work on describing these things scientifically, and then you present it all to the public to show what your discoveries are and what they mean, how these animals are related to each other and where they fit into time and space and their genealogical relationship to each to other known animals. So that’s all fun stuff.”

Britt is not teaching GEOL 100 during the Winter 2023 semester but will resume in the spring.