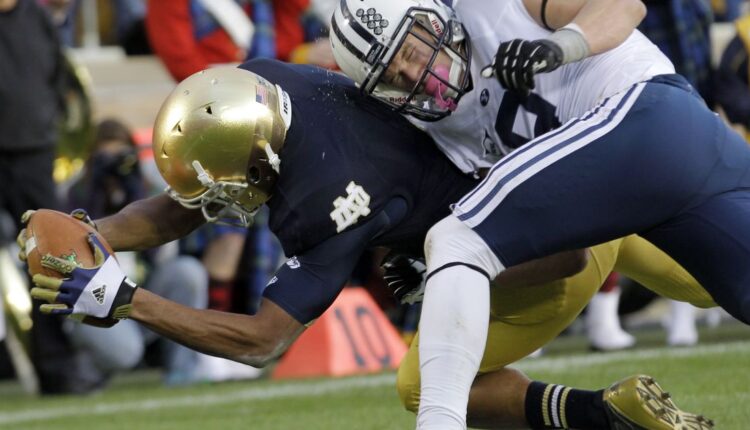 BYU, Notre Dame will end the shamrock series in 2022

The final game in the series between the schools will take place at Allegiant Stadium in Las Vegas.

What was originally planned as a six-game series was then turned into a 2-for-1 deal. With the two games at Notre Dame in 2012 and 2013, BYU has waited nearly a decade for the Fighting Irish to honor their end of the bargain and come to Provo and end the series.

However, due to Notre Dame’s hesitation, a new option has emerged in recent years: a neutral location.

And it seems what is happening.

BYU and Notre Dame will meet at Allegiant Stadium in 2022, the Las Vegas Review Journal reported on Saturday morning.

It makes sense. At the time of writing, BYU was less than 12 hours away from their season opener game against Arizona at Allegiant Stadium. Although the game had not yet started, a record audience was already expected (more than 57,000 tickets sold).

“We had a few discussions about making this a neutral football game where we would be the home game of it now, but it would be a neutral game,” said BYU sporting director Tom Holmoe in 2020. “It’s interesting that they are intrigued by it, but we can’t really agree on where this neutral game is played. So the saga continues. “

With the addition of Notre Dame to the schedule, BYU now has a full schedule of 12 games. The details of the new game are still unknown, but both schools have openings on October 8th and 29th.

But how does all of this fit in with the latest reports on BYU’s invitation to the Big 12 Conference?

On Friday, ESPN reported that BYU, Cincinnati, Houston, and central Florida are expected to submit formal applications to attend the conference next week – with an opportunity to be inducted as early as September 10th.

It has been speculated that BYU could be in the Big 12 as early as next season, but that may have to wait now.

This lineup might be worth sticking to, especially now that Notre Dame is back on the table.