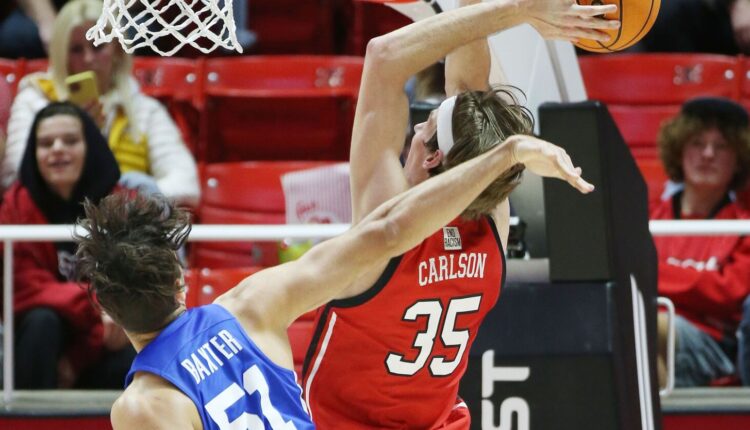 BYU-Utah basketball: Can Runnin’ Utes get a rare win in Provo Saturday?

Winning at the Marriott Center is never easy for any BYU opponent not named Gonzaga, but Utah’s Runnin’ Utes might have their best chance in years Saturday afternoon at pulling out a victory in Provo.

Tipoff is at 4 pm MST and the 263rd meeting between the longtime instate rivals will be televised by the CBS Sports Network.

“Playing at the Marriott Center is not an easy task, typically. We are 1-9 in the last 10 games that we have played there. It is traditionally a great home-court advantage. So we know it’s going to be a very, very difficult game on Saturday afternoon.” — Utah coach Craig Smith

The 9-2 Utes are riding high, having won five straight games and boasting a NET ranking of 21 through Thursday’s games. About the only concern for coach Craig Smith these days is a lower leg injury suffered by starting junior guard Gabe Madsen in Tuesday’s 91-70 rout of UTSA.

Smith said Utah’s medical staff is “paying close attention” to Madsen’s health and are “going to be very diligent with this thing, for obvious reasons.”

The 7-5 Cougars are struggling through a tough season beset by injuries and inconsistent play. They have been without probable starters Trevin Knell and Spencer Johnson most of the season, and played without star forward Fousseyni Traore in Thursday night’s 97-64 win over Western Oregon.

Coach Mark Pope told the BYU Sports Radio Network before the game that Traore is “game-to-game” with an undisclosed injury.

“We’ve got a lot of guys that are out right now,” Pope said.

A lot of students are out right now, too, having wrapped up final exams and headed home for the holiday break. The Marriott Center won’t be rocking as much as it usually is when the Utes visit, which could be viewed as a break for Utah as well.

Also, BYU’s football team is playing in the New Mexico Bowl against SMU on Saturday at 5:30 pm in Albuquerque, which could keep some fans away.

Smith said Thursday that he isn’t buying it.

“I don’t think (the timing) matters too much because they will pack it anyway,” he said. “I anticipate it to be a full house. It’s a rivalry game, right? I just think it is one of those things that both fan bases really look forward to.”

“Playing at the Marriott Center is not an easy task, typically,” Smith said. “We are 1-9 in the last 10 games that we have played there. It is traditionally a great home-court advantage. So we know it’s going to be a very, very difficult game on Saturday afternoon.”

There are many storylines, as usual, surrounding the game, including the return of first-year Utah assistant coach Chris Burgess to Provo. He was Pope’s assistant at BYU from 2019 to 2022 before joining Smith’s staff last April.

It was also going to be a return to BYU for center Gavin Baxter, but the recent graduate transfer to Utah medically retired from basketball last week. Baxter was part of BYU’s 75-64 win over Utah last year at Salt Lake City; Saturday, Traore (possibly) and Gideon George will be the only Cougars who will suit up who were part of that win on Nov. 27, 2021.

Utah center Branden Carlson, who grew up in South Jordan and played high school basketball at Bingham, said after the UTSA game that the rivalry game is special for both teams.

“I try to think it’s another game, but it’s really not. It is always an exciting game. With a rivalry game, you know both teams are out to bring their best each game,” Carlson said after scoring a career-high 27 points against the Roadrunners. “And BYU is a good team, and has some good wins. … So we are ready to go in and compete, but we are going to prepare like it is another game.”

A 7-footer, Carlson presents huge matchup problems for BYU. The all-Pac-12 player is averaging 15.2 points and 7.3 rebounds per game for the Utes, who were picked to finish 10th in the conference but are already 2-0 in league play and have an upset of No. 4 Arizona on their resume.

“We know what we are capable of, and we know what we bring each day,” Carlson said. “You gotta have a little edge to you still. We can’t get complacent with the success we have been having. We just have to take each game like our record is 0-0, and their record is 0-0. We just gotta come out ready to compete.”

The Runnin’ Utes will be donning these throwback jerseys when they take to the floor at the Marriott Center to take on BYU Saturday afternoon in Provo.

Ogden Valley to get $5.5 million to help conserve and reuse water