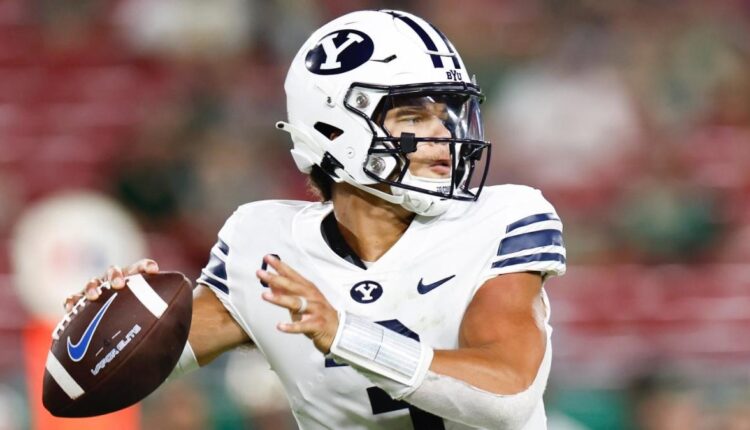 The East Carolina Pirates and BYU Cougars face off in a prime time matchup on Friday evening. ECU enters the matchup with a 5-3 overall record in 2022, including three wins in its last four games. BYU is 4-4 overall and looking to snap a three-game losing streak. LaVell Edwards Stadium hosts the action in Provo, with BYU’s crowd projected to be raucous under the lights. BYU is 2-6 against the spread, while ECU is 5-3 ATS in 2022.

Kickoff is at 8 pm ET in Provo. Caesars Sportsbook lists the Cougars as 3.5-point home favorites, while the over/under, or total number of points Vegas thinks will be scored, is 63.5 in the latest East Carolina vs. BYU odds. Before making any BYU vs. East Carolina picks, you need to see the college football predictions and betting advice from SportsLine’s advanced computer simulation model.

The SportsLine Projection Model simulates every FBS college football game 10,000 times. Over the past six-plus years, the proprietary computer model has generated a stunning profit of almost $3,000 for $100 players on its top-rated college football picks against the spread. Anyone who has followed it has seen huge returns.

Now, the model has set its sights on ECU vs. BYU and just locked in its picks and CFB predictions. You can head to SportsLine now to see the model’s picks. Now, here are several college football odds and betting lines for BYU vs. ECU:

Why East Carolina can cover

East Carolina must go on the road in this matchup, but the Pirates will bring a highly effective offense to Provo. Mike Houston’s team is No. 2 in the AAC in both total offense (472.6 total yards per game) and passing yards per game (309.6). The Pirates are leading the AAC in completion rate, with fifth-year quarterback Holton Ahlers producing a career-best 70.3% completion rate on an individual basis. East Carolina is No. 1 in the conference in third down rate at 52.5%, and also possess a very strong ground attack.

The Pirates are in the top four of the AAC in rushing yards (163.4 per game) and yards per carry (4.9), and BYU’s defense is scuffling. BYU is giving up 5.8 yards allowed per play, no. 95 in FBS this season, and the Cougars are outside the top 100 in success rate allowed. BYU is also giving up 6.0 yards per carry against the last two games, opening a potential point of attack for East Carolina.

Why BYU can cover

BYU has strong balance, including five pass-catchers with at least 200 receiving yards, and they have a prolific quarterback at Jaren Hall. The junior signal-caller has 2,101 passing yards this season, and he has 40 touchdown passes with only eight interceptions in his productive career. On defense, BYU is holding opponents to only 219.3 passing yards per game, and the Cougars are capable of slowing East Carolina’s potent passing attack.

How to make East Carolina vs. BYU picks

SportsLine’s model is leaning over on the point total, with both teams projected to throw for at least 275 passing yards. The model also says one side of the spread hits in well over 50% of simulations. You can only see the model’s pick at SportsLine.