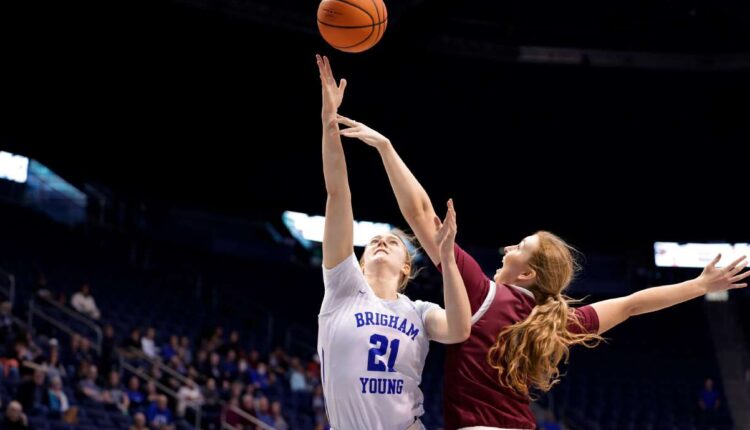 PROVO — Santa Clara did it again.

Less than 48 hours after the Broncos’ men’s basketball team knocked off BYU in the Bay Area, the Santa Clara women stormed into the Marriott Center and emerged with a 69-59 win over BYU, snapping the Cougars’ seven-game win streak in front of an announced crowd of 1,438 fans Saturday afternoon in Provo.

Lara Edmanson had 15 points and five rebounds to lead Santa Clara (13-9, 4-5 WCC), and Ashley Hiram added 13 points and nine rebounds for the Broncos.

Leading scorer Tess Heal supplied just 13 points for Santa Clara, but also dished out seven assists in the upset that handed BYU its first loss since a pair of mid-December setbacks to top-rated Gonzaga and Portland.

“Credit to Santa Clara; they came in here and did the job, played really well together,” BYU coach Amber Whiting said. “We did not. We need to learn from this loss and get back to work on Monday.”

Nani Falatea had 20 points, six rebounds and three assists to lead the Cougars, who got 14 points and 15 rebounds from Lauren Gustin. That’s Gustin’s 19th double-double in 20 games this season.

But it wasn’t enough for a BYU squad that shot just 25% (7-of-27) in the second half and committed 13 turnovers — eight of which weren’t directly afflicted by Santa Clara.

Kaylee Smiler added 13 points for the Cougars (11-9, 6-3 WCC), but only one other player — former Fremont standout Emma Calvert — had at least two buckets. Santa Clara outscored BYU off the bench 15-2, with Heather Hamson’s second-half bucket being the only made field goal from a non-starter.

“Our bench has to give energy and effort,” said Whiting, who played her usual tight rotation of eight players. “And Heather did that really well tonight, but I’ve got to get that from all of our players.”

The Cougars clung to a 36-35 lead at halftime behind double-digit scoring from Falatea and Gustin and a 51% shooting clip. But Gustin had just eight shot attempts before the break, and Falatea just six as Santa Clara’s defense tried to end the BYU anchors.

The Broncos opened the second half on a 14-0 run, leading by as much as 49-36 while canning three of their first four 3-pointers. The Cougars connected on just 3-of-14 field goals in the third quarter as Santa Clara took control, 52-43, with a 17-7 jaunt through the period.

“We’ve struggled in the past coming out of the locker room,” said Hamson, who shot 1-of-3 for 2 points and an assist for a plus-3 in 4:23, the only positive player in plus-minus . “Something we need to work on is refocusing and locking in.

“We got a little frustrated on defense, and I think that really showed.”

And on defense, Santa Clara coach Bill Carr schemed everything around Gustin, the nation’s leading rebounder who also ranks second in double-doubles. Gustin was going to what she did, but the Broncos were going to make it as tough as possible on the 6-foot-1 post who shot 7-of-14 from the field.

“We had a lot of open looks, and I feel like girls just need to pull the trigger,” Whiting said. “I would rather have a (missed) shot than a violation, any day of the week. I want those instead of just turnovers.

“I don’t care about it’s two feet behind the line; let’s shoot.”

BYU travels for a road tilt Thursday at Saint Mary’s. Tipoff is scheduled for 7:30 pm MST on the WCC Network, followed by a trip to Stockton to face Pacific at 3 pm MST Saturday.