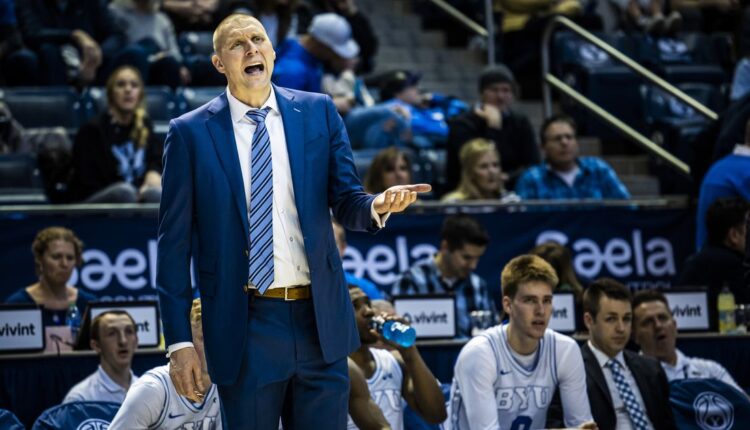 Provo • Remember that scene in “Space Jam” where Daffy Duck puts on a football helmet and says, “It’s gut-check time,” before ramming a Monstar into the stomach head first at full cartoonish speed?

The Cougars had a tough weekend — especially the men who lost games to Santa Clara and San Francisco, and came out of them seemingly gearing up for more soul searching. Coach Mark Pope’s comments afterwards, which will be addressed later, sounded more panicked than normal. They actually harkened back to earlier in the season when he was saying the team wasn’t very good or competing much at all.

The women split their games against San Francisco and Santa Clara, with the loss to Santa Clara snapping a seven-game winning streak. Coach Amber Whiting saw a “lull” in her team before the San Francisco game and addressed it, she said, and that led to a dominant performance in that game.

In the loss, they did hardly any of what got them the previous seven wins. It was a gut-check moment for them, as well.

“It’s good to have lost right now so then we can refocus and know, OK, we have to dial into this, this and this to go forward,” Whiting said. “We’re not playing our best basketball. We played really, really, really good basketball Thursday — not great [Saturday]. So I know it’s in there, and I know they’ve been playing good. So this isn’t like a freakout, panic, push the panic button [situation]. It’s just a, let’s refocus and get back at it.”

The men seem to be in a much more fragile spot than the women right now, and that matters because their next game is against a very, very good team. However, the schedule lightens up after that with a three-game stretch of very winnable games.

As for the women, they’ve been trending upward for weeks, building their defensive identity and winning convincingly in the process. The loss to Santa Clara feels more like a hiccup than an identity crisis.

In all, BYU fans should be more concerned about the state of the men’s team right now.

The men understandably dropped a few spots after this past weekend. But the women actually rose three spots compared to last week.

“We’ve taken a major, major step back, and that’s 100% me. I have to get my act together, find out some answers because we should never have a performance like that ever, ever, ever, ever, ever, ever. … Like I said: We have terrific guys and they’re terrific basketball players. Right now, our coach stinks. So I have to fix that.” — Mark Pope on BYU radio after Saturday’s loss to Santa Clara.

Pope often likes to fall on the sword when his team is going through a rough stretch. But this time he really, really fell on it.

During the radio interview, he was somewhat combative when one of the hosts tried to point out something from the previous 22 games. “I don’t want to talk about the last 22 games,” he said. After he was done with the interview and the hosts were going to commercial, he clearly shouted in frustration.

Many fans on Twitter wrote that they liked this amount of accountability by Pope. Sometimes, though, when coaches do stuff like this, it’s difficult to ascertain whether it’s coming from a genuine place of self-reflection or it’s merely to protect the players who are actually on the court winning and losing a game.

Current and former players have said the way he is with media is the same as in private. So if Pope thinks he’s not coaching well at the moment, that’s likely what he believes.

(BYU Athletics) A young fan holds up a sign during the BYU women’s basketball team’s game against San Francisco on Jan. 19, 2023.

8,758. That was the announced attendance at the women’s game Thursday morning against San Francisco. It’s the most people that have attended a women’s game in BYU history. As in, ever. That’s astonishing, and an accomplishment.

It should be noted, however, that Thursday was the annual Kids Game, where a bunch of local schools bus young students into the arena. It’s like a mass trip. So it’s not like thousands of kids each bought tickets and skipped school without their parents knowing to watch Nani Falatea and Lauren Gustin go to work.

Still, the environment was loud and a lot of fun. It was the first time all season there was a true atmosphere in the Marriott Center for a women’s game.

Rudi Williams has improved his play since he started coming off the bench. But in the last two losses, Williams has become a scoring machine.

He had 24 points against Santa Clara and 28 against San Francisco. That’s 52 combined.

In those two games, Williams provided basically all the bench scoring. And seeing as how they were losses, it makes sense that he wanted to put his team on his back and find a way to will out a victory.

The one to look out for here is the men’s home game against St. Marys, which is on a nine-game winning streak and undefeated in WCC play. With the way the men have been playing, there isn’t much reason to believe they can avoid a third straight loss.

But they have a week to prepare for St. Mary’s and they’ll be at home, where they usually play well. And it’s the type of game that if they win, it could turn their whole season around.

Latino Teens Are Deputized as Health Educators to Sway the Unvaccinated

As States Seek to Limit Abortions, Montana Wants to Redefine What Is Medically Necessary