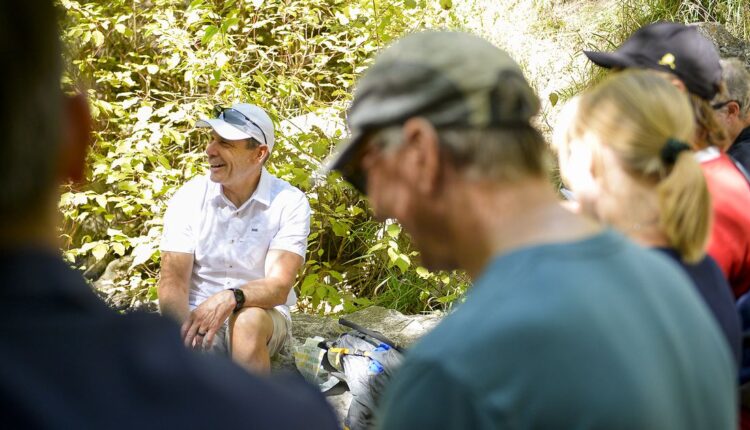 Utah Rep. John Curtis sits on a rock in a dried river bed near Provo, trees cast shade from above while files and bees glide around. It’s mid-hike and the Republican politician is fielding questions from climate experts, discussing energy solutions and how best to preserve the environment.

Curtis looks comfortable talking climate with the small crowd of hikers who have joined him on a trek through Rock Canyon. During a break for lunch, the group discusses nuclear energy and the warming temperatures across the world.

In earlier decades, a GOP politician publicly advocating for the environment was a one-way ticket out of office. Just ask former South Carolina congressman Bob Inglis.

Then, around the time he returned to the US Capitol, Inglis’ oldest son turned 18 and was getting ready to vote for the first time.

“He came to me and said, ‘Dad, I’ll vote for you, but you’re gonna clean up your act on the environment,'” he recalled.

While he might have won the vote of his son, Ingles ultimately lost his seat after being primaried in 2010 by Trey Gowdy — a young, upstart Tea Party supporter. The year before his GOP primary defeat, Inglis introduced a bill to raise wages and cut carbon, a move he joked was, “probably not the best political timing.”

Inglis — now the executive director of republicEn, a climate change advocacy group targeting conservatives on the “EcoRight” — joined Curtis and a handful of people who took part in the “field trip” into Rock Canyon Trail to talk about conservative solutions to climate change . The small event, hosted by republicEn, Citizens’ Climate Lobby and other groups, brought together Utah constituents, climate scientists and conservationists to discuss the impacts of climate change.

Rock Canyon is a special place for Curtis. It’s an area he helped Provo buy and preserve during his tenure as mayor. The congressman says he hikes the trail regularly, explaining that it’s a beautiful area that is a short distance from his house.

“That’s probably why I love it – it hasn’t changed,” Curtis told The Salt Lake Tribune. “You see more people on the trail, but we didn’t have to hike very far before we were by ourselves.”

He led the group up in the canyon to a streamgage, one of several stops on the hike. No water ran through gage, but Curtis said that’s normal for this late in the summer.

(Chris Samuels | The Salt Lake Tribune) US Rep. John Curtis talks with Tom Moyer, of the Citizens’ Climate Lobby, while leading climate scientists and constituents on a hike in Rock Canyon in Provo, Monday, Sept. 26, 2022.

“Believe it or not, it was only about 10, 12 years ago when we had too much water up here coming down the canyon and they stored it in (Rock Canyon Park),” Curtis said. He explained that the canyon is a part of Provo’s watershed, and, nowadays, the municipality will take the water higher up the canyon and pipe the water to the city.

Curtis’ work in conservation has evolved since his days as Provo’s mayor. Last year Curtis started the Conservative Climate Caucus, a group that has snowballed to nearly 80 members. For Inglis, assembling the caucus is a feat in and of itself.

“If you told me that was going to happen circa 2011, I would have thought ‘no way.’ But it’s just remarkable, the change that’s happened,” Inglis said.

Representing Utah’s 4th Congressional District is a balance for Curtis. It’s easy to receive praise from clean energy advocates, but there is an area of ​​his constituency that sees his climate policies as a threat: those in the coal, oil and gas industries.

“To be honest, hearing me talk about it is hard on them, and they give me a lot of license because I think I’ve built relationships with them, but there are still many men and women who struggle with this, and they feel attacked by it,” Curtis said.

Curtis said he has talked with constituents with generations of miners, a group he says has been vilified as polluters while they have kept the lights on nationwide for decades. Curtis said, in his experience, those groups want to participate in new technologies, but you have to meet the people where they are.

“We’ve done a terrible job,” he said. “We say this over and over again: ‘we’re gonna go to these communities and help them transition (to clean energy),’ and we never do.”

When he entered Congress, Curtis said he wasn’t comfortable with the branding the GOP had allowed itself to have, which Curtis said, was, “two things: not caring, and denying the science.”

But now that sentiment is changing, Curtis said, with the journey culminating in his Conservative Climate Caucus. It’s his mission to engage Republicans on climate change, and he feels that more conservatives acknowledge climate change than the public might think. Republicans and Democrats agree more than they disagree, Curtis said, but they have different approaches to solving the same problem.

Few Places Have More Medical Debt Than Dallas-Fort Worth, but Hospitals There Are Thriving