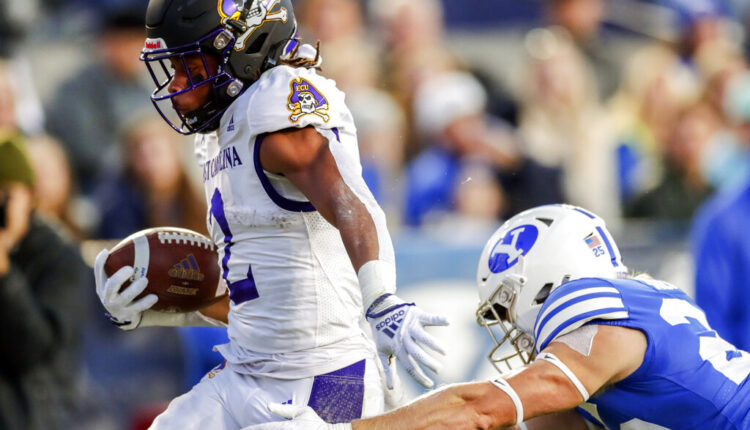 ECU running back Keaton Mitchell shakes off a tackle from BYU’s Talan Alfery during the Pirates’ 27-24 win Friday in Provo, Utah. (Ben B. Braun / The Deseret News via AP)

Conrad, a freshman, made the game-winning kick with a line-drive wobbler that just cleared the crossbar following two timeouts from BYU.

It was the fourth consecutive win for East Carolina (6-3) while BYU (4-5) has lost four straight.

The Pirates were aided on their final drive with a 15-yard pass interference penalty on fourth-and-8 to get to the BYU 22 with 40 seconds left.

Mitchell carried the ball 21 times, including a 31-yard touchdown run in the first quarter. He was later hit in the head by Jacob Boren after catching an 8-yard pass from Holton Ahlers with six minutes left in the game. Mitchell finished the series, but then sat on the bench with his helmet off and didn’t play in the final drive. Boren was ejected for targeting.

Ahlers threw for 197 yards and added a pair of short-yardage touchdown runs for the Pirates.

Jaren Hall threw two touchdown passes and was 18-of-25 passing for 144 yards and added 60 yards on the ground for BYU. Lopini Katoa had 116 yards rushing on 20 carries with a 24-yard touchdown run.

There’s plenty to do this Halloween with many local events