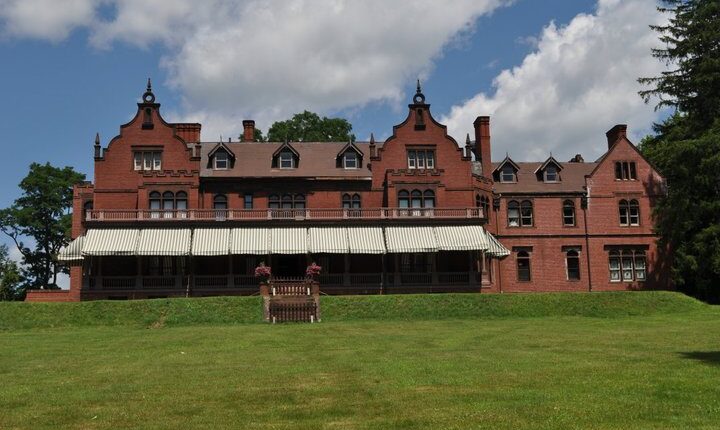 CONNECTIONS: From Ventfort to Ventfort Hall

The Berkshire Edge also publishes a magazine, with a new issue out this month. In it is an article about the Berkshire Cottages — the great estates of America’s Gilded Age. The Gilded Age had a profound impact on The Berkshires, as farms were purchased and replaced with the mansions, formal gardens, and servants’ quarters of the nouveau riche.

There were many Berkshire Cottages, from Williamstown to Tyringham, and each told a story of the super-rich in a changing country. Throughout the month of May, Connections will tell some of those stories.

From Ventfort to Ventfort Hall

Ogden Haggerty was not born into wealth, but he “made good,” as they called it, in the 19th century. As a wealthy man about town, he joined the proper New York City clubs and hobnobbed. One of the best was The Century Association. Founded in 1847, the Century Association was so called because it was intended to limit membership to 100 men. It was housed in a brick building designed by architects Charles Gambrill and HH Richardson. In 1891, The Century built a new clubhouse designed by the architectural firm of McKim Mead and White.

The Century was founded “for the purpose of advancing art and literature by establishing a library and gallery of art and by such other means as shall be expedient and proper.” To those words of commitment should be added the word “American.” The founders of the Association meant to advance and support American art and letters at a time when literature was synonymous with England, art with France, and architecture with Italy, a time when “American literature” and “American art” were considered oxymorons.

In its heyday, members took on the role of patron of painters. It promoted young American authors including Herman Melville and Nathaniel Hawthorne. It built an impressive library and art gallery. Today the Century Association still thrives, lists its main activity as conversation, and is still referred to as one of the most exclusive private clubs in New York City.

Ogden Haggerty was a founding member of the club. He made his fortune in the New York City auction and commission house Haggerty & Co. He lived at 26 Bond Street in New York City with his wife, Elizabeth Sedgwick Kneeland Haggerty, and his daughters, Annie and Clemence. Their summer house, Ventfort, was in Lenox, built on the same property as Ventfort Hall today.

Haggerty was an avid collector and the patron of 21-one-year-old George Inness. For 31 years, until Haggerty’s death in 1875, Haggerty purchased Inness’ work at generous prices, gave him direct financial assistance, and underwrote his travels abroad. Haggerty also introduced Inness and his work to his friends in the Berkshire colony.

Author Catharine Sedgwick commissioned Inness to create a bookplate for one of her titles. Reverend Henry Ward Beecher at Blossom Farm (now Miraval), and Samuel Ward at Highwood (on the Tanglewood grounds), bought Inness’ works.

The works of Asher Durand, Thomas Coles, and Inness hung on the walls of Ventfort. Haggerty’s patronage of Inness was seen as an enlightened endorsement. Inness stayed in The Berkshires as a guest of Haggerty and Sam Ward. Many of his paintings are Berkshire landscapes on and around the Ventfort and Highwood properties.

Elizabeth (Mrs. Ogden) Haggerty was a widow from 1875 to 1891. On April 24, 1891, the executors of her estate sold Ventfort to Sarah Spencer Morgan, wife of George Hale Morgan. The Morgans built Ventfort Hall.

On Sept. 17, 1893, The New York Times reported on the Morgan’s housewarming party. “This occasion brought together nearly all the cottagers … [the residence] is complete in every detail in furnishings and fittings, and it makes one of the finest summer homes in the town. The rooms and halls are very large … so that the 150 or more people who were there on Friday evening had no difficulty in moving about and there was no crowding.”

Junius was a member of the Century Association. He and his business partner, CC Cuyler, founded the American School of Classical Studies in Rome. Junius was a collector and noted connoisseur, and today part of his collection is at the Metropolitan Museum of Art.

There were other Berkshire residents who were founders and members of the Century Association, as well, including William Cullen Bryant. Bryant said, “In addition to artists and literary men, members should include physicians, journalists, merchants, men of leisure, and members of the bar and the bench.” In the latter group was Berkshire resident Joseph Hodges Choate of Naumkeag.

Today, we celebrate Berkshire “culture in the country” as if it were a novel, but the Berkshires have a long and distinguished history of promoting American arts.