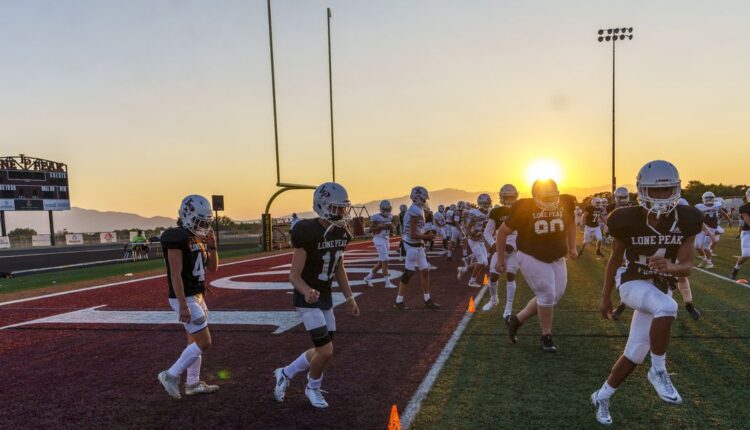 Utah high school football season has passed halftime. And while there was no movement within the state’s top four teams, now fewer than 10 teams can say they haven’t lost a game.

Among those undefeated teams is South Summit, which posted a record loss last season. It makes its debut in the power rankings this week alongside Stansbury.

But aside from the teams that haven’t lost yet, there’s a jam among most of the top 25 and it doesn’t get any easier to hold onto a spot.

The Falcons beat Westlake behind another strong defensive performance and allowed only two points.

The Cavemen lost to the unbeaten Corner Canyon and gave up 51 points.

The Sentinels skipped points and scored 42 of their own, but defeating the winless Copper Hills Grizzlies won’t be enough to catapult them into the top three.

The Jaguars saved their unbeaten season with a late interception from Safety Ian Matau.

The Riverhawks won their game against Sky View for the second straight win in the region.

The Beavers started their schedule for the region with a solid win over the Delta Rabbits to stay undefeated.

The Wildcats have turned around compared to last season and are one of only seven undefeated teams left more than halfway through the regular season.

The Bulldogs lost their first game of the season, but senior quarterback Jace Welsch contributed both touchdowns against Springville – a passing, a rushing.

The Buffaloes only scored two touchdowns against regional opponents Stansbury, who is in a winning streak of three games.

Defeating the No. 7 Provo skips the Red Devils by four places, especially after being knocked out in the first half.

The Timberwolves allowed the now 3-3 Cedar Valley Aviators to bring them their first loss of the season in a dramatic way. Aviator’s senior quarterback Easton Schank threw for a touchdown and ran in three more while also providing the game-winning 2-point conversion.

The Wasps took their third straight win, but it was over a Maple Mountain team that has now lost five in a row.

The Knights only allowed Pleasant Grove one touchdown, and that was in the fourth quarter.

The Panthers returned to the winning column with a blowout against Cedar at home. Senior running back Keith Adams runs in four touchdowns.

The Eagles kept Monticello goalless in three of the four quarters when they won their second straight game. Running backs Garett Fabrizio and Parker Crum each ran into two touchdowns, while Westin Gines and Draker Goodliffe each had one.

The Titans lost their second game in a row to a Hail Mary game that went right for Davis. Darts receiver Ty Hoagland caught the touchdown pass from Jackson Stevens.

The Tigers stomped on the Jordan Beetdiggers at 42-7.

The Thunderbirds did not allow Alta a single point in their first regional win of the season in the second half.

The Lancers lost their first game in five weeks in an overtime thriller against Farmington.

The Bengals bounced back from last week’s defeat to Olympus, reaching two games over .500.

The Titans lost their first regional game, leaving East to win his first game of the season.

The stallions make their debut in the power rankings with their three-game winning streak and victory over Tooele, who was 6th on the rankings last week.

Ask KHN-PolitiFact: Is My Cloth Mask Good Enough to Face the Delta Variant?