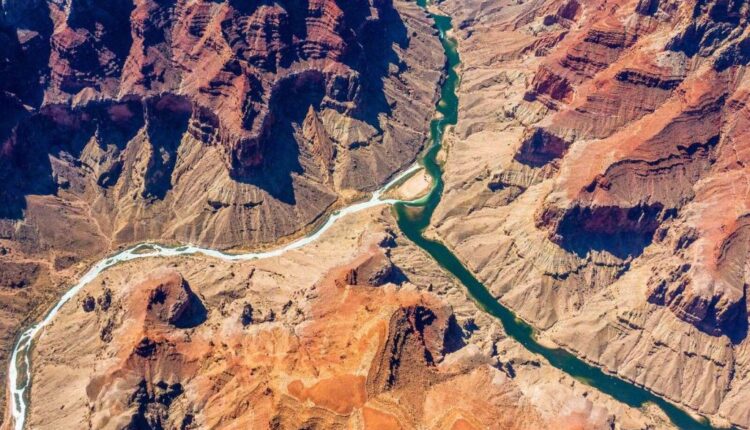 The confluence of the Colorado and Little Colorado rivers in the Grand Canyon, shown here in a September 2020 aerial photo from Ecoflight, represents an area where the humpback chub has rebounded in the last decade. That progress is now threatened by declining water levels in Lake Powell, which could lead to non-native smallmouth bass becoming established in the canyon. | Jane Pargiter/Ecoflight

As climate change continues to shrink the nation’s second-largest reservoir, water managers are scrambling to prevent the release of an invasive fish into the Grand Canyon.

Smallmouth bass, a voracious predator and popular game fish, have been introduced into reservoirs throughout the Colorado River basin, including Lake Powell. The looming problem now is that as lake levels drop to historically low levels, the invasive fish are likely to escape beyond Glen Canyon Dam, threatening endangered fish in the canyon, whose populations have rebounded in recent years.

Smallmouth bass are a warm-water-loving species, hanging out in the top part of the water column, which is warmed by the sun. Until recently, the intakes for turbines at Glen Canyon Dam had been lower in the water column, where colder temperatures kept the fish away. But as the lake level falls, the warmer water band containing the smallmouth bass is sinking closer to the intakes, making it more likely that they will pass through the dam to the river below.

Warmer water below the dam also means a more ideal environment for the bass, which thrive in temperatures above 61 degrees Fahrenheit (16 degrees Celsius).

“With the levels we are expecting to get to this coming year, water temperatures are going to be warmer than they’ve been in 52 years in the Grand Canyon,” said Charles Yackulic, a research statistician with the US Geological Survey’s Grand Canyon Monitoring and Research Center.

The research center has been modeling the likelihood that smallmouth bass will become established below the dam under different scenarios and providing that information to decision-makers and water managers.

Jack Schmidt, a Colorado River researcher at Utah State University and former director of the research center, co-wrote — along with Yackulic and others — a March 2021 paper that sounded the alarm that future warming is likely to disproportionately benefit nonnative fish species to the detriment of native species. The problem from which all others stem, including the changing fish communities, and the reason Powell is so low in the first place is the climate-change-driven supply-demand imbalance, Schmidt said. Although the trout fishery and other native fish around Lees Ferry would also be hurt by the bass, the biggest risk would be to the fish listed under the Endangered Species Act (ESA), including the humpback chub.

“The biggest concern for a lot of stakeholders is how it could affect humpback chub and razorback sucker,” Yackulic said. “Over 90% of humpback chub are found in the Grand Canyon reach, and they have been doing really well over the last 10 years.”

So well in fact that in 2021 the US Fish and Wildlife Service down-listed humpback chub’s status from endangered to threatened, a decision based partly on the thriving populations in the Grand Canyon. The down-listing means the chub still retains some ESA protections, but it is no longer at immediate risk of extinction.

Scientists think that smallmouth bass are responsible for decimating humpback chub populations in the upper basin — for example, near Echo Park, at the confluence of the Green and Yampa rivers.

“We are very concerned that if they get into the Grand Canyon, they could have a similar impact on the humpback chub and, through predation and competition, could jeopardize that new listing of being threatened,” said Melissa Trammel, a fisheries biologist with the National Park Service. “Our efforts to try to restore that species in the canyon would definitely be impacted.”

‘No low-hanging fruit to prevent this’

The Glen Canyon Dam Adaptive Management Program has formed a technical work group subcommittee to address the problem. Several ideas have been floated: installing a bubble curtain that could keep fish away from the dam intakes; electro-fishing and removal of smallmouth bass below the dam; selective withdrawal devices that allow dam operators to pull from different parts of the water column; or releasing colder water from the deeper jet tubes once a week to make the temperatures below the dam inhospitable to the invasive fish. This, however, would mean bypassing the turbines that make hydropower.

Clarence Fullard, acting program manager for the Bureau of Reclamation’s Glen Canyon Dam Adaptive Management Program, said they are considering all options to prevent smallmouth bass from becoming established, but there is still a lot of uncertainty about a way forward.

“There’s really no low-hanging fruit to prevent this,” he said. “The scale of Glen Canyon Dam and Lake Powell make it hard to come up with solutions. We don’t know what we could do operationally.”

One thing that has seen some success on the Green River below Flaming Gorge Dam is something called a flow spike. A carefully timed, short, high-flow release from the reservoir can knock the fish off their nests and wash their eggs downstream. According to Trammel, this tactic has reduced the reproduction of smallmouth bass in that area by about 30%.

And because of the planned releases this year from Flaming Gorge under the Drought Response Operations Plan (DROA), this spike flow is scheduled again for later this month.

“The extra water being released from Flaming Gorge to go down to Powell is actually being reshaped to help endangered fishes in the upper basin,” Trammel said. “We would not have had that experimental flow this year without the DROA.”

For now, members of the technical work group are creating a strategic plan, a draft of which will be released in August. Scientists will continue monitoring in places where the smallmouth bass are likely to try to establish. Each year for the past decade, Yackulic said, monitoring efforts have caught up to three smallmouth bass who made it through the turbines and ended up below the dam.

“The thing about fish is for every one you catch, there’s probably quite a few you don’t catch,” he said.

Still, scientists don’t think the fish have become established enough yet for there to be a reproducing population below the dam. But time is of the essence.

Although the invasive-fish issue may get overshadowed by the crush of bad news surrounding the Colorado River — record-low reservoir levels, shortages, emergency federal actions, potential loss of hydropower — scientists say there is still an urgent need to act on it.

“The long-term cost of trying to control that species maybe doesn’t feel as urgent as losing hydropower at Glen Canyon Dam, but once they are established, it is almost impossible to get rid of them,” Trammel said. “There’s no agency in the world that says, ‘I wish I had waited a little longer to try and control this invasive species.’”

But any operational changes to combat an invasion of smallmouth bass in the Grand Canyon are likely to be just a stopgap measure.

“We should never forget that the fundamental problem is much bigger than how to operate Glen Canyon Dam; it’s about the balance between watershed runoff and consumptive use,” Schmidt said. “And until we get consumptive use matching the available supply, we are always going to be flirting with disaster. We can only hold off these changes for so long before we lose the battle.” Aspen Journalism covers water and rivers in collaboration with The Craig Press.