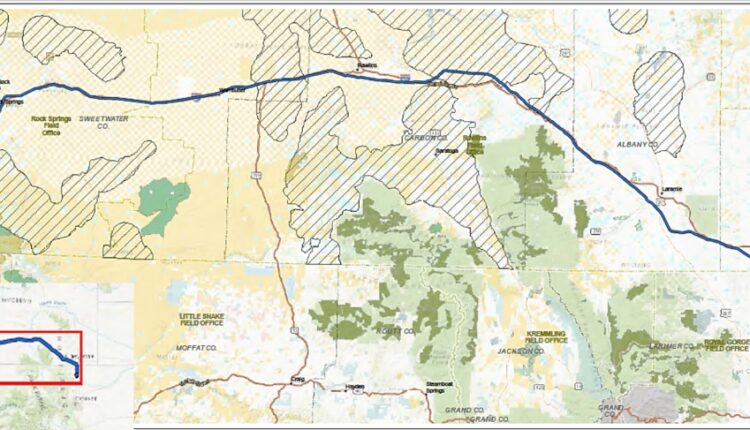 A Fort Collins-based development group that wants to build a 338-mile pipeline to bring water from the Green River-fed Flaming Gorge Reservoir in Utah and Wyoming to Colorado’s Front Range says it has secured a development partner for the project, which could cost as much as $2.3 billion.

Water Horse Resources LLC, a Fort Collins company led by founder and CEO Aaron Million, has secured MasTec Inc. (NYSE: MTZ), based in Coral Gables, Fla., as a development partner, the company said. MasTec is a construction company specializing in infrastructure, with 2021 revenue of almost $8 billion, according to filings with the US Securities and Exchange Commission.

“MasTec will lead construction of the company’s proposed 338-mile, minimum 55,000-acre-foot pipeline to deliver water from the Green River, a tributary of the upper Colorado River Basin, to Colorado’s Front Range for agriculture, municipal and environmental in-stream flows benefiting the Poudre and South Platte River systems,” according to a Water Horse Resources press release.

Water Horse Resources spokesperson Steven Silvers said MasTec has come in as both an investor and strategic partner. He declined to reveal how much MasTec has invested, except to say that it’s “in the millions.”

The project would generate hydroelectric power as the water descends from the Rocky Mountains to the Front Range. The underground pipeline would stretch from northeastern Utah, across southern Wyoming and south into the Front Range along Interstate 25.

“Water and other products have been efficiently and safely transported in large diameter, cross-country pipelines for decades, and while Water Horse may be the nation’s longest proposed water pipeline, it won’t be the last,” Gray said in a written statement . “The growing demand for water in the dry western regions of the US will require innovative solutions like the one that we intend to build.”

Million first proposed the pipeline project almost two decades ago, as described in a 2007 article by Steve Lynn, a reporter for the Northern Colorado Business Report, a predecessor of BizWest.

“Million, who grew up in the Green River, Utah, area, was pursuing a master’s degree in resource economics at Colorado State University in the summer of 2003, when he said he was sitting in Morgan Library staring at a map of Colorado. He noticed that the Green River loops briefly into Colorado from Utah, making it a legal tributary of the Colorado River mainstem,” according to the article.

“That geographic fact meant a legal filing and appropriation of Flaming Gorge water could be made and, according to a million, no one in Colorado had ever done so.”

Million initially proposed a 548-mile pipeline, with some estimates placing the cost at $3 billion. Million applied to the Federal Energy Regulatory Commission, which initially rejected the application in 2012 before granting a rehearing.

Million eventually pulled the application to scale it down for “operational, political and financial reasons,” Silvers said.

The current plan, with about 200 fewer miles of pipeline, provides for significantly reduced costs, he said.

Million’s plan has faced significant opposition from business groups and government officials on the Western Slope, Utah and Wyoming. As recently as November 2019, the Colorado Water Conservation Board rejected a proposed $330,000 grant for the project, asserting that it was “too speculative.”

“In addition, the grant applicant is a private development company, not a Colorado water user,” the agency stated.

Water Horse says that the regulatory framework for the Colorado River, established over the last century, planned for use of waters from the Green River to serve Colorado.

“We are building critical infrastructure, just like has been done over the last 150 years, to supply and support Colorado’s increasing water supply shortfall,” Million said in a statement. “With the help of our respected development partners, we will prevent farms from drying up, meet unmet municipal demand and lessen the impact on more fragile river systems.”

Silvers said that under the 1922 Colorado River Compact, Colorado has rights to water from the Upper Colorado Basin that it “doesn’t get right now.”

“Utah is going to be the most popular girl at the prom for a long time,” Silvers said.

The US Bureau of Reclamation recently decided to release an extra 500,000 acre feet of water from Flaming Gorge to maintain hydroelectric power at Lake Powell’s Glen Canyon Dam.

Silvers liked the Flaming Gorge pipeline idea to Nebraska’s proposal for a $500 million canal to redirect water from Colorado into Nebraska — also driven by the Colorado River Compact.

Water Horse is seeking a summary judgment to reverse a November 2020 refusal by the Utah state engineer to grant a conditional water right to allow for interstate diversion of Green River water. A conditional permit would enable Water Horse to seek other required permits.

“In addition, Water Horse for the last 28 months has been preparing its environmental resource reports on the proposed route, which is the first major step in the NEPA/EIS (National Environmental Protection Act / Environmental Impact Statement) process,” Silvers said in to email to BizWest. “This report should be completed for submission this year.”

Silvers said that Million’s proposal would begin with the private sector but ultimately would involve municipalities and regional water districts.

“The interest is obviously out there,” he said, noting that many Front Range communities are “facing a considerable water shortage.”

Water Horse has been working with investment bank Societe Generale to secure financing for the project, with a prospectus circulating to potential investors, Silvers said.

“They’re meeting with other investors now,” he said. “I think with MasTec onboard, other funding will be coming soon.”

This article was first published by BizWest, an independent news organization, and is published under a license agreement. © 2022 BizWest Media LLC.

Watch: UVA Doctor Talks About the State of the Pandemic and Health Equity