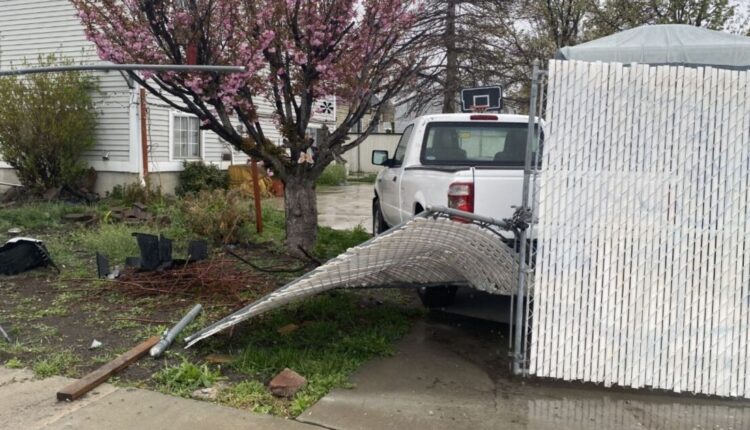 Driver crashes through SLC fence and yard, runs away

SALT LAKE CITY — Cesar Sanchez heard a loud crash in the middle of the night at Rose Park.

“Just happened so almost,” said Sanchez. “That woke us up actually around 3:30ish thinking it was an earthquake — come to realize that it was a vehicle that ran through our yard.”

Early Friday morning at the corner of Redwood Road and 1530 North, the car crashed through Sanchez’s fence and drove through the yard. It barely skirted the house itself, but it did hit the home’s gas meter.

“It was a big leak,” said Sanchez. “They evacuated us, neighbors next door, until everything was fixed. And now we’re just waiting for an inspection to make sure that we’re able to come back in the house.”

Police are now searching for the suspect in this hit-and-run case; the driver abandoned their vehicle after the incident happened.

This isn’t the first time drivers have come crashing through Sanchez’s neighborhood, he said.

“We’ve had another incident a couple years back with another vehicle up front,” he recalled.

Sanchez doesn’t understand why people are driving so fast.

It could’ve been so much worse though, he added.

“I guess every parent’s worst dream right?” said Sanchez. “My son’s bedroom is down right there, my daughter’s bedroom is right above that, so that corner right there is always kind of back of my mind, you know, something that could happen. And it could be bad. So we’re very blessed and fortunate. It wasn’t, you know, the case this time around.”

Officials are still searching for the driver who fled the scene. The Salt Lake City Police Department asks anyone who might have information on the suspect to 801-799-3000.

Journalists Cover the Gamut, From Rising Insulin Costs to Delays in Autism Care for Children