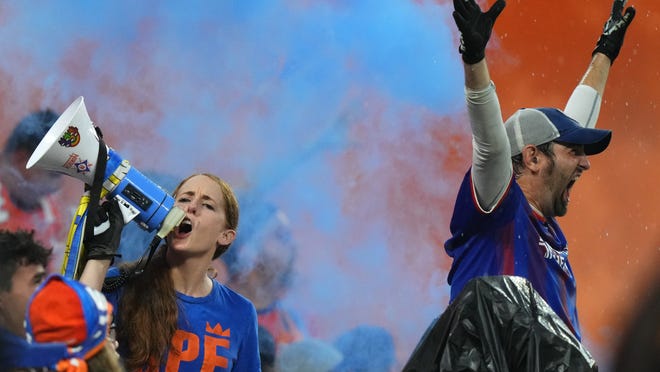 For FC Cincinnati head coach Pat Noonan, this is the best time of the Major League Soccer season.

You can feel the summer heat breaking, Noonan said Thursday at the Mercy Health Training Center, and with autumn looming, four matches remain in what’s already been a thrilling season for FC Cincinnati (10-8-12, 42 points), which can tighten its grip on one of seven Eastern Conference playoff spots with a win Saturday.

Cincinnati’s farthest trek west since the 2019 season will see it face an 11-win Real Salt Lake side clinging to the seventh and final playoff spot in the Western Conference. Not far behind “RSL” in the standings are heavy-hitting Los Angeles Galaxy and Seattle Sounders, so the match is as important to them as it is to FCC.

With an attack driven largely by Sergio Córdova’s eight goals and Jefferson Savarino’s six scores, has used potent defending to hang in the playoff picture for essentially all of the 2022 season.

“They’re a very similar club to where we are — right above the line,” Noonan said Thursday. “At home, trying to be a playoff team. They certainly had the (3-0 loss to Austin), so we saw some rotation there. We expect a very strong group and a very motivated group . . . It’ll be a very tough game and we know that with where they’re at, with where we’re at, it’ll have a playoff feel, as it should.

Not since the 2019 season has FC Cincinnati ventured as far west geographically as the club will for Saturday’s match at Real Salt Lake.

After the COVID-19 pandemic took hold, FC Cincinnati’s road trips have only gone as far as Minneapolis and St. Paul, Minnesota, and Houston. That makes Saturday’s game at America First Field − altitude of more than 4,400 feet − rare air in more ways than one.

In Sandy, which is just outside of Salt Lake City, the altitude doesn’t rise to one mile above sea level, but depending on an individual’s body, the effects can be similar.

FC Cincinnati’s trying to focus less on the altitude and more on the match itself, and players are applying their anecdotal experiences of playing at higher altitudes in preparation.

“We’ve briefly talked about it. We’ve had this discussion enough and in different capacities throughout the years of what’s the best approach. We’ll spend as little time as possible there, so we’ll arrive late Friday and we’ I’ll see what that means,” Noonan said. “We’ll have guys get some additional supplements and, with their diets, how to best prepare. Aside from that, it’s ‘let’s go play a game.’ So, I wouldn’t say it’s as extensive as others would approach or when you’re playing in Denver at a higher altitude. We know it will play a role.”

Following Saturday’s 6-0 win over San Jose Earthquakes at TQL Stadium, FCC goalkeeper Roman Celentano said some of his family members recently relocated to Colorado. He said he previously used visits there to strike balls and test how they travel through thinner air.

Alvaro Barreal said Thursday he’d played at higher elevations in Bolivia, and would be mindful of that during the RSL trip.

America First Field sits at the base of the Wasatch Mountains, which serve as a stark reminder of the impact altitude could have on Cincinnati.

Series info: Real Salt Lake won the first and only meeting between the clubs during the 2019 season.

Noteworthy: FC Cincinnati has lost just once in its last 16 matches, a 2-0 defeat at Columbus Crew July 17. That’s the lone blemish on FCC’s record since restarting play following the June international break. By winning last Saturday against San Jose, Cincinnati took seven of a possible nine points during an eight-day span.