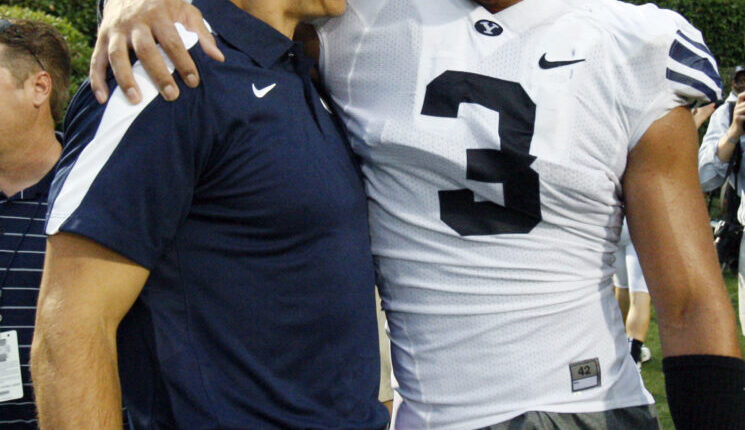 Former BYU linebacker and coach Kelly Poppinga excited to be back in Provo | News, Sports, Jobs

Even though it has been seven years since former BYU linebacker and assistant coach Kelly Poppinga has worked for the Cougars, he said that coming back for the first time on Thursday felt entirely natural.

“This morning when I walked in the building, it just felt right,” Poppinga said during Thursday’s introductory press teleconference. “It felt like home and it felt like I’d never left honestly. I drove up this morning, parked in the same spot I used to park seven years ago and walked into the building. It just felt good.”

BYU head coach Kalani Sitake announced Wednesday that Poppinga had been hired as special teams coordinator and as a defensive assistant coach.

“Kelly is a BYU guy who has a ton of previous experience with BYU football, having both played here and coached here,” Sitake said in the press release. “He’s recruited and coached some great players over his career, guys he has helped get to the NFL. Kelly is a tireless worker and a relentless recruiter. He brings outstanding experience as a special teams coordinator and defensive coach and coordinator from his time at Virginia in the ACC and with Boise State. I’m excited to have him back at BYU.”

Poppinga played for the Cougars in 2006 and 2007 after transferring from Utah State, then spent the 2008 season with three NFL teams before going to Super Bowl XLIII with the Arizona Cardinals.

He began his coaching career as a defensive intern under BYU head coach Bronco Mendenhall in 2009, then became a graduate assistant in 2010. In 2011, he was elevated to coach outside linebackers for five seasons as a full-time assistant from 2011 to 2015. Poppinga was also the Cougars’ special teams coordinator from 2013-15.

When Mendenhall left BYU to take the Virginia job, Poppinga went with him and stayed until Mendenhall stepped down after the 2021 season. He coached at Boise State in 2022 right up until the Broncos lost to Fresno State in the Mountain West Conference championship game last weekend.

It was at that point that the door opened up for him to return to Provo.

“As soon as the game was over, I know (Boise State head coach Andy Avalos and Kalani had talked and gave me permission to talk after the game,” Poppinga said. “Kalani and I got on the phone and talked, and there was “There was an offer. My wife and I had to make a quick decision. Saturday night everything kind of went down and I told Kalani that this is where I wanted to be. I had to tell all my Boise State players that I was taking this.” job but I do believe this is a great opportunity for me and my family.”

He said he wondered when he left Provo if there would ever be a chance to return to his alma mater.

“I was hoping for the opportunity to come one day but I didn’t know what was going to happen,” Poppinga said. “I thought maybe 10 or 15 years down the road the opportunity might come. But BYU, it’s who I am. I grew up with my dad taking me and my brothers to games since I was a little kid. I was able to play here and coach here. My first three kids were born when I was coaching here and they are fired up to remember what it is like to go to games here. It’s exciting to be able to be back and be able to contribute.”

When asked what he thinks he has gained in the seven years since he left BYU, a number of things came to mind for Poppinga.

“I’ve gained so much,” Poppinga said. “Experiencing the rigors of recruiting at a Power 5 conference was probably the biggest thing I learned. I came to understand the process of recruiting at a Power-5 level, the time it is going to take and the recruiting battles you are going to have to be able to get great recruits. I got to Virginia and it was competitive. We were in the ACC and fighting with the SEC and the Big 12 and everyone for the same guys. Those were fun battles to have. We’re going to that level of recruiting now and we are going to have to be in those battles.”

Poppinga has developed connections along the East Coast and singled out the Atlanta area as a spot where he believes BYU can make in-roads in big-time recruiting.

Poppinga will be working closely with Sitake and new Cougar defensive coordinator Jay Hill, neither of whom he has worked with before.

“I remember sitting down with Kalani at a couple of camps and talking, then staying in contact over the last few years,” Poppinga said. “In the coaching profession, you’ve always got to keep those networks open. I’ve never been coached with him or with Jay Hill but I’ve always wanted to learn from them and learn this defensive scheme that has been so successful over the years. I’m anxious to get to work and get things rolling here.”

He doesn’t have a position assignment yet, although he certainly has plenty of experience with linebackers and edge rushers. At this point it’s all about focusing his main goal for BYU football, one he repeated multiple times during the press conference.