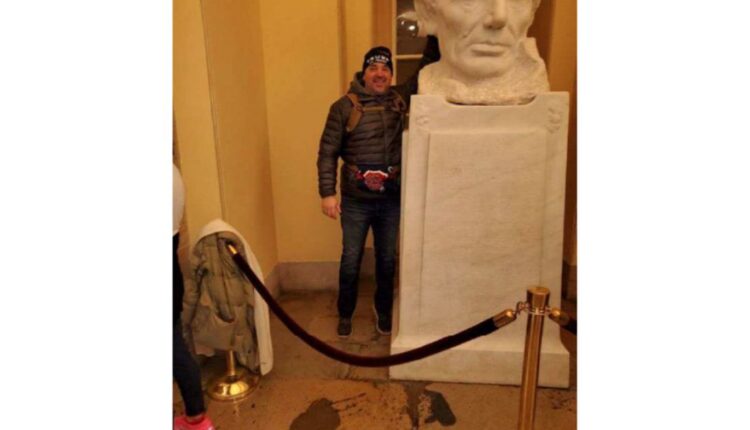 The Salt Lake City officer retired in 2017 and in January pleaded guilty to a misdemeanor charge related to the insurrection.

(US Department of Justice) Michael Lee Hardin, 50, of Kaysville, Utah, in a photo taken with a bust of Abraham Lincoln, in what appears to be the Capitol Crypt inside the US Capitol on Jan. 6, 2021. Hardin was arrested on April 2, 2021, by federal authorities, accused of taking part in the insurrection.

A former Salt Lake City police officer escaped jail time for taking part in the attack on the US Capitol on Jan. 6, 2021.

US District Judge Timothy Kelly on Monday sentenced Michael Lee Hardin, 50, of Kaysville, to 18 months of probation and 60 hours of community service, and ordered him to pay $500 restitution for a single misdemeanor charge of parading, demonstrating, or picketing in a Capitol building, which he pleaded guilty to in January.

Federal prosecutors had asked that Hardin spend 45 days in jail, but Kelly did not include any jail time in Hardin’s sentence.

On Jan. 7, the FBI received an anonymous tip that Hardin had been inside the US Capitol during the insurrection. According to a statement from the FBI, Hardin called a friend two days before the Capitol was stormed to say that he was going to Washington, DC, to “fight for the United States.”

On Jan. 6, the same friend received text messages from Hardin that said, “We stormed the Capitol, I am in here now!; I know you don’t like Trump, but he is the rightful President!;” and “We will return until we win!”

On Jan. 10, another friend contacted the FBI and told agents that Hardin had been in the Capitol on Jan. 6, and provided a picture of the former officer wearing a Trump hat and standing next to a bust of Abraham Lincoln inside the Capitol.

The FBI also obtained video of Hardin at several locations inside the Capitol, and determined that his cellphone was there on Jan. 6. When agents interviewed Hardin, he “maintained that despite his two decades of police service, he did not realize he had broken the law on January 6 until he received a call from the FBI case agent.”

“It somehow did not cross him mind on January 6 that, at the very least, he would have needed to go through security in order to enter the Capitol Building,” court records state.

According to court documents, one of Hardin’s former fellow police officers called him a “good and moral man. … I’m saddened that this momentary lapse of reason will leave a lasting scar personally and professionally.”

Hardin retired from the Salt Lake City Police Department in 2017 and was arrested in April 2021.

As an officer, he was named the department’s officer of the year in 2012 for his role in solving a 25-year-old murder case. In 2016, Hardin sued the city, the police department, its chief, its deputy chief, two officers and an assistant county attorney after an off-duty conflict with co-workers allegedly created a conflict at work. The case was later dismissed.

Hardin had initially been charged with knowingly entering or remaining in any restricted building or grounds without lawful authority; disorderly and disruptive conduct in a restricted building or grounds; disorderly conduct in the Capitol; and parading, demonstrating or picketing in the Capitol, according to a news release. The first three charges were dropped as part of his January plea agreement.

He traveled to the nation’s capitol with his stepmother-in-law, Janet West Buhler, who also entered the US Capitol on Jan. 6, 2021, according to the FBI. She pleaded guilty in January 2022 to a misdemeanor charge of parading, demonstrating or picketing in a Capitol building, and has not yet been sentenced.