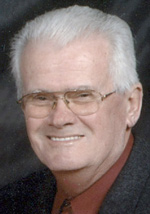 Steve had worked at Steel Parts Corporation in Tipton, retiring in 2001. He was an elder and a member at the Emanuel Lutheran Church in Arcadia. He enjoyed golf, playing whenever he found the time. Steve was a fan of IU basketball and the Cincinnati Reds, and he enjoyed traveling. He was a former member of the Arcadia Lions Club.

Funeral services will be held at 11 am on Monday, December 12, 2022, at the Emanuel Lutheran Church in Arcadia, with Rev. Thomas Ludwig presiding. Burial will follow at Fairview Cemetery. Visitation will occur from 2 to 5 pm on Sunday, December 11 at Young-Nichols Funeral Home and on Monday at the church from 10 am until service time.

Memorial donations may be made to: Emanuel Lutheran Church, 355 Shaffer St., Arcadia, IN 46030.