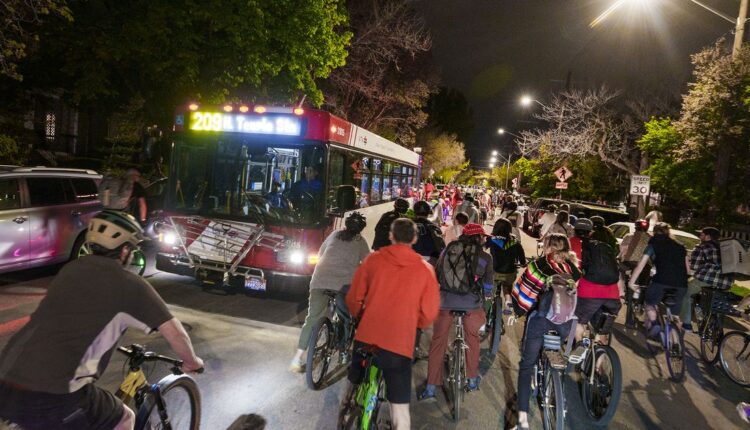 Has a good thing gone bad?

What starts as a few guys drinking beer in a parking lot soon will turn into a swarm of cyclists.

It’s Thursday at 9 pm, and the crowd is trickling into the Continental Cleaners lot at 900 East and 900 South for the weekly ride. Within an hour, hundreds of riders will roll down the road in an event that can stretch into the early morning, led only by the whims of whoever happens to be in front.

The 999 Ride started more than a decade ago as an inclusive group to encourage people to get on their bikes, and it still meets that goal. All walks of life gather in the parking lot before morphing into a blur of faces pedaling down the street after the 10 pm departure.

It doesn’t matter how old they are or what bike they ride. Everyone is welcome.

Since growing from humble beginnings, however, the 999 has rankled more than a few by blowing through red lights, blaring its music and leaving behind a trail of trash.

“There’s a spirit and a way to do it,” cyclist Mat Hockett said, “and I just don’t feel like the 999 is sort of holding that down these days.”

Hockett joined the group years ago, when it was smaller. At the time, it reminded him of a mass ride he experienced living in San Francisco. Since then, he said, the Salt Lake City event has turned into a giant party, so he has shifted to tooling around town with a few friends.

Cyclists who do participate — and their numbers are mushrooming weekly as the weather warms — are protective of the ride. It’s a place to connect with old friends, discover new ones and encourage healthy exercise. It’s also a chance to blow off some steam and flip the dynamic between bicycles and cars, even if for only a short period of time once a week.

It’s a bit of grassroots culture in Salt Lake City, they argue. Is that such a bad thing?

Kathleen McSorley has bikes hanging on the wall of her home near the lot where the group congregates before taking to the streets for the night. When she moved here, she thought the ride was cool but ultimately found the vibe off-putting.

It’s tame enough in the winter, when only a handful of 999 faithful participate. But when temperatures rise, McSorley said, the group gets out of control.

“We’re all for the idea of ​​a critical mass ride, and we think it’s awesome to raise cyclist awareness, and that’s something that should be happening,” McSorley said. “But (it) just seems like it’s a dangerous ride.”

And the 999 Ride has experienced tragedy. In 2018, a 22-year-old cyclist was killed by a FrontRunner train as he tried to cross the tracks.

In McSorley’s 9th and 9th neighborhoods, riders block the sidewalk and areas for buses, she said, and sometimes spill into the intersection. The noise can be disruptive when she tries to catch some early shut-eye, with loud music and the occasional fireworks being set off.

She wants participants to be respectful of the neighborhood and pick up after themselves but, because it’s only once a week, she hasn’t made a big deal of it.

Michael Taylor, whose family owns Continental Cleaners, spends every Friday morning in the spring and summer cleaning up after the 999 ride, scooping up beer bottles and cans, cigarettes, food, even vomit. He said he’s had a window smashed out in a minivan in his parking lot.

“I don’t want to be a buzzkill, obviously,” Taylor said. “I know people (are) having fun, and I would assume the majority of them are being decent people, but when I have to do this every Friday morning, it just gets tiring.”

An effort to police itself

(Leah Hogsten | The Salt Lake Tribune) Since growing from humble beginnings, the 999 has rankled more than a few by blowing through red lights, blaring its music and leaving behind a trail of trash.

Taylor and McSorley have tried to talk to the police, without much luck. If they do respond to a noise complaint, McSorley said, it’s after the group already has left.

Salt Lake City police detective Michael Ruff said the ride can spur calls about trespassing, noise and traffic being blocked, and can pull officers away from other duties.

He declined to say how officers monitor the ride but said the department doesn’t want to write tickets and conduct enforcement. Instead, he said, it hopes for voluntary compliance with laws.

That doesn’t always happen, but some say the group has tried to police itself.

When one homeowner with a baby complained about noise, the group stopped riding through that neighborhood. And when garbage gets left behind, riders like John Warnock try to clean it up.

Since Warnock joined the ride two years ago, 999 has become his favorite activity in Salt Lake City. He’s made friends through the weekly gathering and plugged back into the community after the pandemic forced people apart.

“And then,” he said, “I started to sort of notice that I was dodging cans.”

Most weeks, Warnock rides a trike with bins attached to it, picking up the trash that gets left behind as the group meanders through the city.

When one cyclist tossed a beer can at a car, Warnock squeezed on his brakes, picked up the rubbish, apologized to the driver and, along with others, scolded the rider.

“There’s weirdly a prevailing culture within the 999,” he said. “It’d be difficult to really speak for it, but there are social rules in place, even in this sort of big blob of people all coming for their own reasons.”

The desire to keep the ride orderly, he said, comes partially from the feeling of community that it produces. The other part, he said, is fear.

“We’re all living in Utah,” he said. “We know how big the government can get into things and how eager they can be to shut down something that doesn’t correspond with their values ​​or whatnot.”

(Leah Hogsten | The Salt Lake Tribune) Salt Lake City police say it hopes for voluntary compliance with laws for the riding group. That doesn’t always happen, but some say the group has tried to police itself.

Warnock said the only aggression he’s seen from cyclists has been steered at motorists. And even then, he said, it’s directed at those drivers trying to push their way through the crowd.

Cyclists in the 999 routinely zip through red lights, but Warnock said they usually only run them if they were already pedaling through a green light when the signal changed. (Other observers have disagreed with that assertion.) Even at its biggest, he said, the 999 takes only about five minutes to pass through an area.

Nobody who participates in the 999 is shy about what happens along the ride. They know it’s loud. They know they flout traffic laws. But there’s also a somewhat unified sentiment about those who complain.

“They could suck it up once a week,” said Brandon Norvell, a cyclist who joined the ride in 2020. “They could wait a whole second.”

Having to be somewhere at 10 pm, Norvell said, isn’t worth running over people.

(Leah Hogsten | The Salt Lake Tribune) Hundreds of cyclists, many with glowing lights attached, tour the streets of Salt Lake City during the weekly 999 social ride.

Naresh Kumar was going through a rough breakup in 2010, when a counselor gave him some advice: Find something to keep busy.

So he dug out a rusty bike he hadn’t ridden in years from behind his mom’s house and repaired it, giving Kumar his introduction to the city’s cycling community.

After leading an around-town cruise for the Outdoor Retailer trade show, he and a friend decided to start their own weekly ride.

“Evenings in the city with Naresh,” as it was called, didn’t take off immediately. To make the ride easier to remember, Kumar renamed it 999: 9 pm at 900 East and 900 South. The only thing cyclists had to keep in mind was to show up on Thursdays, which Kumar picked to avoid competing with activities people had on weekends.

The ride had a simple goal: Get people to have fun on their bikes. But it also had an ethos of producing power in numbers and providing a sense of safety when riding at night.

In its first year and a half, when Kumar regularly attended, 40 cyclists was considered a big night. After leaving Utah, Kumar would return and participate occasionally, watching what he helped create swell in popularity.

“It had floored me,” he said, “just how many people were attending these rides.”

Kumar, now back in Utah, said he has complicated thoughts about what the ride has become. He’s glad it’s still around. He’s happy that riders are enjoying themselves and finding it valuable.

And he knows that as it continues to gain popularity, it’s going to draw more scrutiny.

“They’re just hiding behind the ride,” he said, “and kind of exploiting that sort of inclusion that we’ve fostered.”

(Leah Hogsten | The Salt Lake Tribune) Alessandro Rigolon, an assistant professor of urban planning at the University of Utah, said if it’s done safely, the ride is a good way for people to connect and share experiences.

The 999 Ride, Kumar said, gives Salt Lake City a release from daily life. It’s a promise that a community will be available every Thursday night, rain or shine.

“With it growing the way that it has,” he said, “that’s only become more of a guarantee that somebody will be there.”

Alessandro Rigolon, an assistant professor of urban planning at the University of Utah, said if it’s done safely, the ride is a good way for people to connect and share experiences.

He witnessed the ride when he lived in the 9th and 9th neighborhood and said it wasn’t any noisier than when cars drove by with loud music or exhaust pipes. Despite the gripes some have, Rigolon added, events like the 999 are positive because they raise awareness about cyclists, who often are an afterthought in road design.

It offers a sense of companionship, he said, and a sense of safety in numbers.

Rashmee Shah has lived in her home near the starting point of the ride for four years and said the group hasn’t been too disruptive or caused any damage to her property. She likes the cultural aspect of it, too, and said it’s something special for the neighborhood.

She has toddlers and does worry about the music waking them up. So far, it hasn’t been a problem.

“It’s just loud,” she said. “It doesn’t go on for too long. As long as they don’t make it any longer than it already is, and it’s safe for the people involved, it’s OK.”

(Leah Hogsten | The Salt Lake Tribune) Hundreds of cyclists gathered to tour the streets of Salt Lake City during the weekly 999 social ride, Thursday, May 5, 2022.