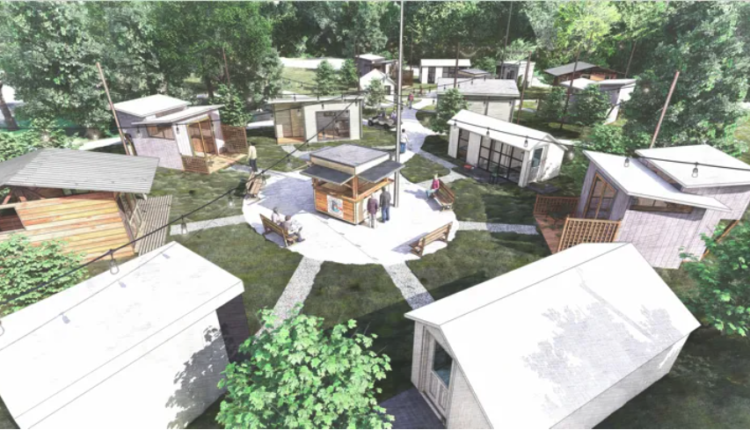 Rendering shared by The Other Side Village depicting the walk-through community for chronically homeless residents that would provide full health and wellness services, shops, and hundreds of accommodations in far west Salt Lake City in 1850 W. Indiana.

The Other Side Academy announced its ambitious goal of building 400-500 small homes for the area’s chronically homeless population on a former landfill in far west Salt Lake City, if the city agrees to repurpose the large property.

The plans for a small community based on the model of similar successful ventures in other cities have been in the works for months. What wasn’t known was where it was going.

That question was answered Thursday when The Other Side asked the city to rededicate the city-owned property in 1850 W. Indiana (900 South) to a shape-based UN2 (FB-UN2) to suit the walkable and mixed-use community the land would hold as part of the plan.

“The Village is a permanent housing development for the chronically homeless where those coming from chronic homelessness can find not just tiny houses to rent cheaply,” The Other Side wrote on her file. “But services and resources that help them along the way are in a hand-up model, not a hand-out model.”

The Other Side announced their goal in April of building the largest homeless service and residential complexes in Intermountain West. If the application for new zone is approved, The Other Side is already planning to have up to 40 houses built by March.

Given the city’s close ties to The Other Side and its status as one of the few cities in the region willing to contribute solutions to chronic homelessness, approval is likely.

It is still unclear what the company will cost and how it will be financed. When the concept was unveiled in April, Mayor Erin Mendenhall suggested that the city could use its resources to help. In addition, there are ongoing costs for third-party providers within the gated community.

If they were built on the 45-acre lot, the 400-plus homes would be between 250 and 400 square feet each, many of which were built as duplexes and triplexes. The houses are paired in groups of 25 to 35 “neighborhoods”, each with amenities.

“This will be a gated community,” said The Other Side, “where residents can come and go as needed, but there may be controlled access from visitors to keep the village safe and orderly.”

In context, the 39-story Astra Tower – which will be the tallest in Utah when built – will contain 380 residential units.

A collection of government and nonprofit groups focused on services and shelter for the homeless built three shelters, each with space for 300-400 people, often close to capacity. And even more people sleep on the streets of the capital.

Some homes have been built for people who are considered extremely low-income and for those who need long-term support to regain stability in their lives. But the number that was built or went online was not enough to meet existing demand.

It is not clear how much of the 45 acre property between Redwood Road and I-215 would be developed as part of The Other Side’s project, although the group also asked for the portion of the property to be rededicated in front of 500 South, which means that the entire property is likely to be developed.

The western half of the property is home to a former landfill and would be closed to residential development, The Other Side said. The eastern half has already passed an environmental analysis and is ready for development.

“The village could use it [the western half] to create additional green areas with trees and paths, to build a modest solar park to power the village and to provide additional parking spaces for large community events in the village, ”says The Other Side.

The land would have to be zoned from public land (PL) to enable residential and mixed uses.

The other side, who probably worked with staff from the planning department, suggested FB-UN2 zoning, which allows for high residential density, low parking space requirements and mixed use.

In addition to retail stores, performance centers, and comprehensive services such as health, dental, and psychiatric care, the group envisions a long list of community facilities.