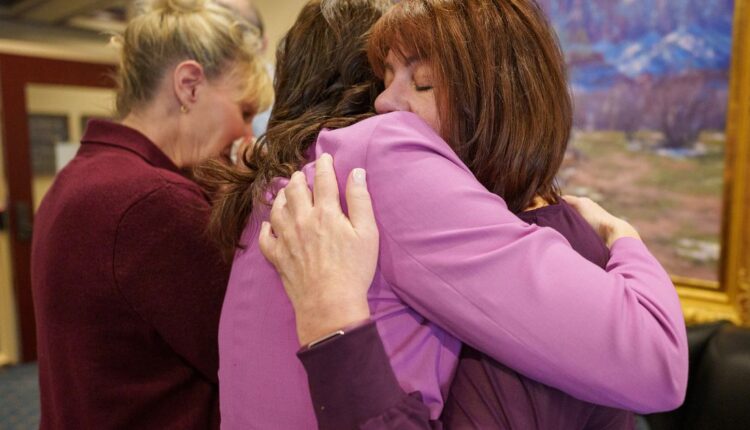 How a domestic violence database could prevent more violence in Utah

The bill — which found unanimous committee support on Tuesday — would create a police database of domestic violence incidents and mandate officers assess the safety of victims.

It’s not every day that you see a sitting lieutenant governor testify in support of legislation, but this was personal for Utah Lt. gov. Deidre Henderson.

Seated next to her aunt and uncle, Henderson voiced her support for a bill in the Utah Senate that would create a police database of domestic violence incidents, as well as mandated police officers ask a series of questions to survivors of domestic violence.

“We’re trying to target and reduce and eliminate intimate partner homicide,” Henderson said. “That’s what we’re trying to do with this bill.”

That bill, SB117, unanimously passed Tuesday during a hearing in the Senate Judiciary, Law Enforcement, and Criminal Justice Committee. The bill now moves to the Utah Senate for consideration.

Henderson has a personal association with the bill. Last August, her cousin, Mandy Mayne, was shot and killed by her ex while she waited at a bus stop in Taylorsville.

Kent and Shauna Mayne, Mandy’s parents, spoke in favor of the bill on Tuesday, which is being sponsored by Sen. Todd Weiler, R-Woods Cross. Weiler’s bill has been months in the making.

(Trent Nelson | The Salt Lake Tribune) Lt. gov. Deidre Henderson appears before the Senate Judiciary, Law Enforcement, and Criminal Justice Committee in Salt Lake City on Tuesday, Jan. 24, 2023. Henderson spoke in support of a Senate bill beefing up how the state combats domestic violence. With Henderson are Kent and Shauna Mayne, whose daughter Amanda was murdered in 2022.

SB117 would create a database for police of past domestic violence incidents and calls to police, even if the calls did not lead to criminal charges.

The bill would also mandate police ask a series of questions — called a Lethality Assessment Program (LAP) — to survivors in order to determine their potential danger. If someone is deemed to be in danger, police would refer them to potentially life-saving resources, including emergency shelters, counseling and other options. The LAP questionnaire is already being used in Utah, as Weiler said Tuesday about half of the state’s police departments already use the tool.

Martin was already a convicted felon but was able to purchase a gun shortly after the incident at Mandy Mayne’s workplace. He shot and killed her days later.

“We are in great support of the bill that’s before you mandating lethality assessments,” Kent Mayne told the committee.

He added that police did not conduct a lethality assessment when they were called to his daughter’s workplace.

“We don’t know if the lethality assessment would have saved Mandy,” Kent Mayne said, “but it was certainly an opportunity missed for some further intervention that might have saved her, and might have given her the resources that she needed in order to stay safe.”

(Trent Nelson | The Salt Lake Tribune) Kent Mayne holds a photo of his daughter Amanda while appearing before the Senate Judiciary, Law Enforcement, and Criminal Justice Committee in Salt Lake City on Tuesday, Jan. 24, 2023. Mayne and Lt. gov. Deidre Henderson spoke in support of a Senate bill beefing up how the state combats domestic violence

In addition to Maynes and Henderson, multiple members of law enforcement spoke in support of the bill during the hearing.

Rep. Tyler Clancy, R-Provo, was among the police officers to praise the LAP. Clancy, an officer in Provo who was recently appointed to the Utah House, said he has used the LAP questions while on the job, saying the LAP form helps prevent victims from slipping through the cracks.

“The LAP form is powerful,” Clancy said. “It’s effective. It’s a proven tool, and this is going to be a really great thing for victims across the state.”

Among those seated in the committee hearing room was Jess Anderson, commissioner of the Utah Department of Public Safety. He voiced his support for the bill last month to The Salt Lake Tribune.

As of Tuesday, it was not immediately clear when the bill could be voted on in the Senate.

If you or people you know are at risk of self-harm, call or text 988 to reach the Suicide & Crisis Lifeline’s 24-hour support.