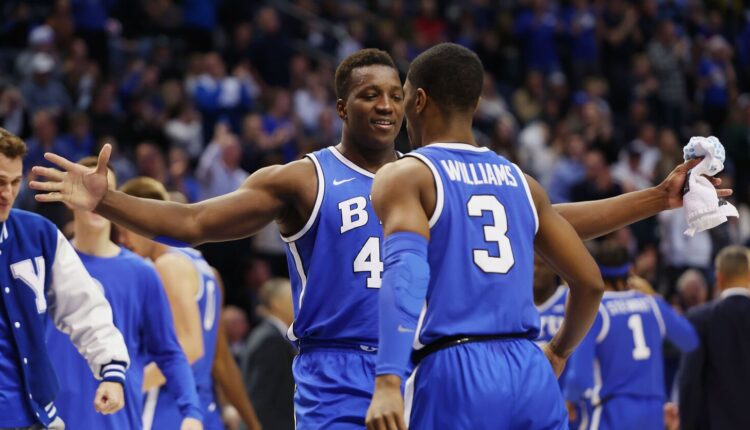 In Los Angeles, the Cougars had just watched their seven-game winning streak come to an unceremonious end. Would their season go south? There is plenty of time for reflection and self-evaluation.

So how would BYU respond?

Saturday, the Cougars bounced back in impressive fashion against San Diego — holding the Bullfighters to under 50 points, 31.6% shooting from the floor, and 3 of 23 from 3-point range — in a dominating 68-48 victory at Jenny Craig Pavilion.

“It feels good because right after the Thursday loss, coach said there was no time for us to feel sorry for ourselves,” said guard Rudi Williams, who scored 13 points, pulled down six rebounds and dished out four assists. “We got out of LA quick and then we got on the bus to get ready for this (game). So nobody really hung their heads or felt sorry for themselves. We dropped one. Oh well. We moved on to the next one.”

And that’s exactly how the Cougars played.

Friday, coach Mark Pope and his staff worked to help the players get into the right frame of mind, borrowing the words of Los Angeles Lakers legend Kobe Bryant.

“The gravity of the world just wants to pull you away and get you distracted,” Pope said. “We played a Kobe Bryant quote for the team that we talked about for a long time about all the things that want to pull you away from the purity of just trying to win as a team. I thought the guys responded well. It would have been really easy for them to come to this game with not their best energy but they had terrific energy.”

The Cougars took control early, thanks in large part to their defensive performance. After falling behind 8-7, they went on a 20-2 run to take a 27-10 advantage.

During that stretch, six different Cougars scored while the Bullfighters went 0 of 14 from the field and were held scoreless for more than 10 minutes.

“Gideon George got us started. He hasn’t always done this, but he got us started on the defensive end with great transition ‘D’ and gap ‘D’ effort really early,” Pope said. “It kind of sucked the rest of the team into that. I thought he was terrible. You’ve got to recommit every day but they’re really trying to make this about this team.”

What was the key to running up a big lead on San Diego in the first half?

“There were a lot of stops. We chart kills,” Williams said. “When we get three defensive stops in a row, and we got 12 of them in a row in the first half. That’s pretty big for us. That led to that run, for sure.”

Coming into the game, Pope was concerned about all of the offensive weapons on San Diego’s roster.

But after the victory, he was “really, really happy” about his team’s defense. Jace Townsend, who leads the toreros in scoring (15.5 ppg), was limited to just seven points.

“This is a scary, explosive offensive team,” Pope said. “San Francisco had them down 15 or 17 points at home and these guys turned the tables really fast. When they get going, they can really, really go. They can score at all five positions. They have five starters on the floor that can score 20 on any given night, and do it in isolation… For our guys to accomplish that, I’m super proud of them.

“They missed some shots. We didn’t give them anything easy. We made it hard for them all night long,” he added. “We were great in transition defense tonight. We were really good at talking ball screens… with (a few) exceptions, I thought we were excellent on the defensive end.”

“They have a lot of versatile players,” he said. “We just paid attention to the scout. Shout out to coach Fueger. He did a good job getting us ready.”

Offensively, BYU played much better offensively than it did against LMU, where the Cougars looked out of sync.

“After the LMU game, we watched some film about how stagnant and easy we were to guard,” Williams said. “Coach tweaked some stuff and I feel like it made a difference.”

BYU recorded 17 assists on 24 made baskets, which is always a positive sign. And the Cougars shot 57% from the field in the second half.

Fousseyni Traore led BYU with 15 points on 6 of 8 shooting, Atiki Ally Atiki scored a career-high 12 points on 4 of 6 shooting, and Spencer Johnson finished with 10 on 3 of 5 shooting.

For Johnson, Saturday marked his first time in the starting lineup since he suffered an injury in late November, replacing Noah Waterman. It’s likely that Johnson will continue to be a starter moving forward.

“Yeah, I think so. He’s consistently our best offensive and defensive player. He belongs there,” Pope said. “We’ll keep tweaking this lineup throughout the whole season. We have so much learning and growing to do, we’ll keep making changes. Noah was fighting a little shoulder injury. I think he got through the game in pretty good health. I’m happy with that. I thought Spence really helped us tonight.”

For Pope, what was the most gratifying part about his team’s win Saturday?

“Our guys are just trying. It’s fun to watch them. In some ways, we make this game really hard for ourselves as we’re just young,” he said. “Patience is super important for all of us, clearly. These guys are really trying and they’re getting better.”