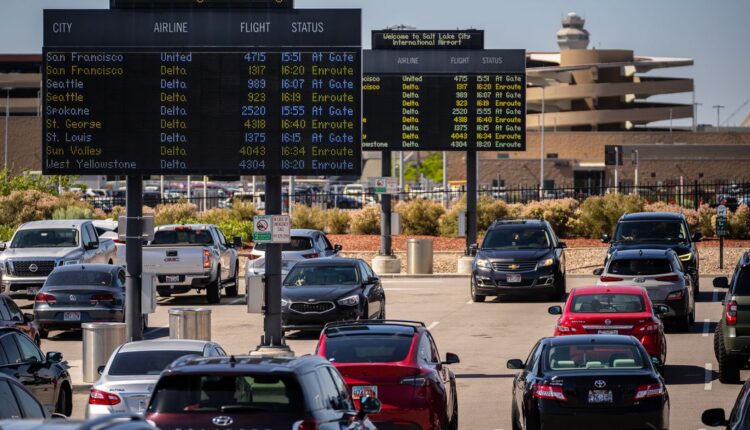 City Council approves funding to expand the sometimes-jammed park-and-wait lot. See when it will come on line.

(Trent Nelson | The Salt Lake Tribune) Cars in the park-and-wait lot at the Salt Lake City International Airport on Thursday, June 16, 2022. The city plans to expand the lot.

If you’re the person who gets drafted to pick up friends and loved ones from the airport, you will soon have more space to await their return.

Salt Lake City Council members approved a budget this week that includes $41.8 million to pay for a host of improvements for the Department of Airports.

Among the budgeted upgrades is about $1.4 million to expand Salt Lake City International Airport’s 132-stall park-and-wait lot. Officials plan to remove landscaping and add about 90 spaces for drivers waiting to scoop up travelers from the arrivals curb.

“We regularly don’t have a place for anyone in the park-and-wait lot,” said Bill Wyatt, Department of Airports executive director.

Design on the new lot is expected to begin next month, with construction slated to start in May. Wyatt expects the project to wrap up in October 2023.

He said the amount going to capital improvements in this budget is consistent with what the Department of Airports spends annually.

A quarter of the money will pay for airfield projects like reconstruction of a taxiway and an access gate.

The airport also will install new charging stations for electric vehicles, and shell out nearly $5.5 million for maintenance facilities and construction of vendor space in concourse B. The new space will give shops and restaurants room to serve weary travelers who completed the long trek across the airport to their gates.

Another $8.2 million is pegged for development and construction of new hangars at the South Valley Regional Airport in West Jordan.

About 90% of the department’s capital improvement budget will come from airport coffers, which are managed separately from the city’s general fund. The remainder of the capital budget is funded by grants.

The final action in the budgeting process is a truth-in-taxation hearing, scheduled for Aug. 16.

Judge makes no ruling yet in lawsuit against Provo OB-GYN | News, Sports, Jobs