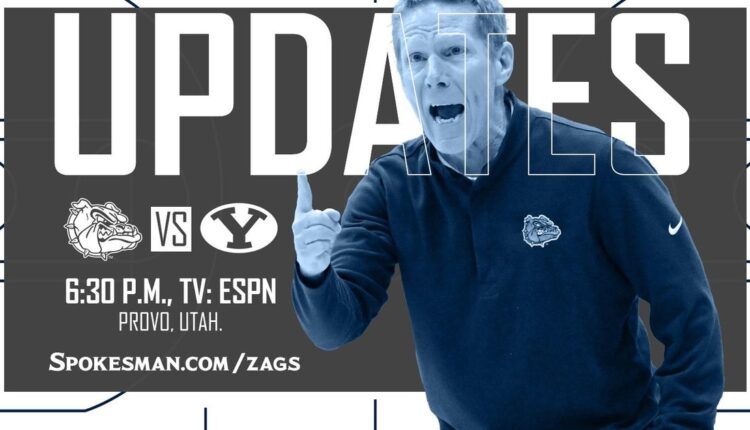 Gonzaga leaned on his frontcourt to take a 44-39 lead over BYU into halftime in front of a sold-out crowd at the Merriott Center in Provo, Utah.

Anton Watson has a team-high 14 points and has made all six attempts from the field, while Drew Timme added 10, while making 5 of 7 attempts.

The Zags bench contributed 15 points, while the two starting guards, Nolan Hickman and Rasir Bolton went scoreless in the half.

Ben Gregg scored six points in eight minutes to go with five rebounds, one assist and a steal.

BYU kept it close by shooting 53.6% from the field and converting 5 of 9 3-point attempts.

This one has been all about the Zags’ bigs, with Watson, Timme and Gregg combining for 30 points.

Huge 4 minutes off the bench for GU’s Gregg, who scores six points with three offensive rebounds, one assist and a steal.

Watson and Timme doing all the scoring for the Zags with five and four points, respectively.

Hickman called for a foul ahead of the break.

19:20 – GU 2, BYU 0: Cougars miss their first shot from the floor and Timme comes down the other end and drops a hook shot in to open the scoring.

Tipoff has been pushed back to 6:40 pm The ESPN broadcast will begin at the conclusion of the Detroit-Toronto hockey game.

Gonzaga and Brigham Young’s short-lived West Coast Conference rivalry is coming to an end with the Cougars leaving for the Big 12 Conference after this season.

That may come as a welcome sight for BYU, which has dropped 11 of the last 12 meetings to the Zags.

The Cougars will look to get one back on the Bulldogs at the Merriott Center in Provo, Utah tonight. Tipoff is scheduled for 6:30 pm and will be broadcast on ESPN.

Pablo Velazquez, a #BYU student and one of Drew Timme’s junior high/high school friends, is wearing a Timme sweatshirt in the middle of the ROC student section. Asked who he’s cheering for tonight.

#BYU’s Mark Pope previewing #Gonzaga: “Freaking Drew Timme, I mean how many years does he have left? Just go be a pro already. He’s been the face of that program for a decade it seems. … He does it his own way and he does it in a way that nobody has successfully figured out.” pic.twitter.com/aS2HYmcYFl

“The ROC’s awesome. It’s one of the best places to play. All their fans are psycho and crazy.”

Timme expects heckling: “At least there won’t be any kiss words from them, so that’ll be nice.” pic.twitter.com/U5eEdKTUxx

Gonzaga holds a 22-7 all-time record over Brigham Young. The Zags have dominated the series in recent years, winning 11 of the last 12 meetings. GU has an 8-3 record in Provo, Utah.

More on the Zags

The former Gonzaga big man is having the best season of his eight-year career. Sabonis and two-time MVP Nikola Jokic are the only players in the NBA to rank in the top 10 in total rebounds and assists. Sabonis is averaging a league-best 12.4 boards while shooting 62% from the floor, better than his previous best of 59% in 2018-19, a year before his two consecutive All-Star appearances with the Indiana Pacers. He also leads the NBA in double-doubles. | read more