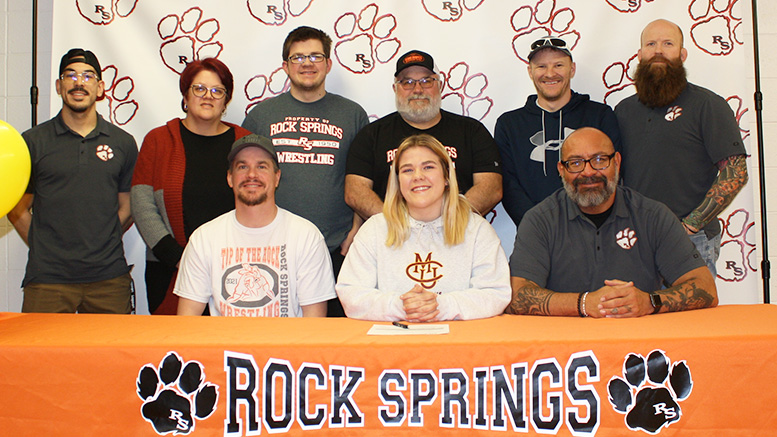 Smith chose Colorado Mesa University because they have had a lot of success in women’s world-level wrestling, plus Colorado is fairly close to home. “I just think it’s the right place for me,” Smith added. During her time there, she mentioned that she wants to study Biology and Education. “I love Biology and I want to coach, so teaching might be my in to coaching.”

She is excited to start competing at an upper level with different girls and different skills. She’s always wrestling with the boys except for last year and is excited for something different. “I love all the work I put into wrestling. It’s not like other sports where you rely on your team. If I lose, it’s all on me. If I win, it’s all on me. It feels empowering to control my own success,” Smith stated when asked what she loved most about wrestling.

Head Coach Dave Doporto talked about how she never gives up. “Since her first year, she’s fought hard for a position on the team and went against the boys. I think she was a pioneer for the girls team to go to state. She has fought hard for her achievements and during her sophomore year, she did not give up, she was able to battle against the boys in the upper weight division. She was always pushing for girls’ wrestling and has dreams of going to the Olympics. I definitely believe she can do that,” Doporto said.

According to Doporto, she is the first girl to be on the Rock Springs High School wrestling team all four years and last year was the first girl to qualified in State in the boys division. She plays football, is a great artist with pieces going to State Art. She put on the first girls’ camp so girls can also be a part of wrestling. “She has really built something for the girls in this area,” Doporto mentioned. Smith was a two-time champion at the Tournament of Champions that is held in Vernal, Utah for the two years they have had girls wrestling held there. He’s expecting her to be the first girl State Champion this year.

Coach Dillon Karajanis brought up that girls’ wrestling only became sanctioned last year in this area. “This is a great accomplishment but it is also still very new.” Karajanis brought up that, “Maggie is definitely great. She is one of the captains of the team, a silent leader. Leads by example, she is the toughest kid I know and a great human in general. She’s always the first in and the last to leave. Always the last one to leave, always. She always puts in the extra time and is not scared of anyone.”

Head Coach Cody Plant from Top of the Rock Wrestling Club has coached her for five or six years and watched her grow. “She is a hard worker and she’s getting what she has earned.” Plant wanted to mention an honorable mention to Smith’s previous coach, Anthony Guillen, who coached her before he moved last year.

Smith has been wrestling with clubs and schools since she was three years old. “I will miss my family and friends the most. It will be a weird transition but I am excited to get away and I know it will be different.”