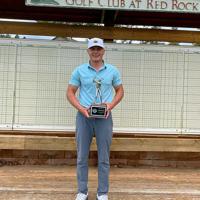 McVay was in a field of 70 young golfers battling for top honors and ended up five shots under par for the win, with the closest competitor being Matt Johnson from Gregory who carded a two under for the two day tournament.

McVay golfed on the varsity team for the Scoopers for six years and his best placing at the state tournament during his high school career was in 2014 when he took fifth place. He also placed eighth in 2013, and 10th place in 2012.

He talked about the Mid-Amateur tournament.

“I’ve always been a fan of Red Rocks. It rewards solid golf shots and you have to map your way around the course, which is my type of golf. I had been playing well going into the tournament so it was nice to continue that and get a win at one of my favorite courses,” said McVay. “The course was setup very well and in great condition. The staff at Red Rocks and SDGA did fantastic work putting this tournament on.”

McVay continues his passion for golf and since high school went on to play college golf at West Texas A&M University for four years.

He turned professional for two years after college, before retaining his amateur status again.

McVay continues to play golf daily with friends and family and the occasional competitive tournament round.

McVay now lives in Vernal, Utah, and is the son of Jamie and Laurie McVay, who resides in Sturgis.

To read all of today’s stories, click here or call 642-2761 to subscribe to our e-edition or home delivery.

Buy and Bust: When Private Equity Comes for Rural Hospitals