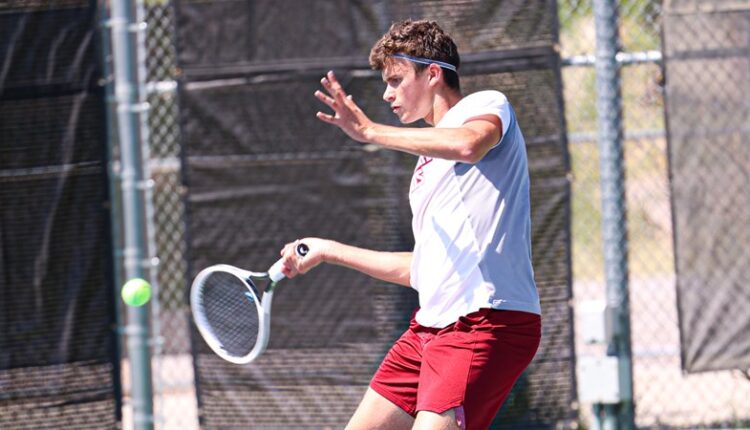 That’s exactly what Louis Menard, senior NM State men’s tennis, did on Tuesday during the first day of the ITA Mountain Regional Tournament at the BYU Outdoor Tennis Courts in Provo. After the Aggies’ double dreams were dashed, the Frenchman from NM State played one-on-one to stay in the race for the regional crown.

• NM State’s doubles teams were unable to maintain their success at last week’s ITA Bedford Cup in the mountains. Gijs Akkermans and Corey Clarke, who won the doubles event in Colorado Springs, Colorado last week, were eliminated in the opening round of the ITA Mountain Regional.
• Akkermans and Clarke suffered an 8-6 setback against Denver duo Daniel Krulig and Peter Sallay and were out of the running.
• Like Akkermans and Clarke, Louis Menard and Martin Simecek were eliminated. This NM State pair found themselves at the wrong end of an 8-3 decision against Utah’s Jayson Blando and Ryan Ta.

• Although Simecek leveled his one-on-one match in the first round with Weber State’s Bo-Han Li, the NM State junior was unable to quit the job. Li took a 6-3, 3-6, 6-0 win over Simecek to advance to the round of 64.
• Akkermans, the first Aggie to make the round of 64, played near-flawless tennis to stay competitive. The NM State Dutchman took a 6-1, 6-0 win over BYU’s Josh Pearce in the first round.
• Shortly after Akkermans moved into the round of 64, Clarke followed suit. The Australian played his way past Videk Ramesh from Idaho 6: 4, 6: 3 to crack his ticket for the second round.
• Akkermans tried to survive with Boise State’s Luka Soskic in the round of 64 but fell 6-2, 6-4 to end his run in the Regionalliga.
• Clarke was one set off the round of 32 but Utah’s Bruno Krenn fought his way back. In the end, Clarke was on the wrong end of a 2-6, 6-4, 6-1 decision against his Pac-12 opponent and failed to make the round of 32.
• The last Aggie on Tuesday was Menard, who faced Montana’s Gustav Thielgaard in a round of 64. With a 6-2, 6-2 win, Menard became the only Aggie to make it into the round of 32.

• On Wednesday morning at 11:15 am Menard will try to advance to the round of 16 of the ITA Mountain Regional. He’ll take on Krulig from Denver.