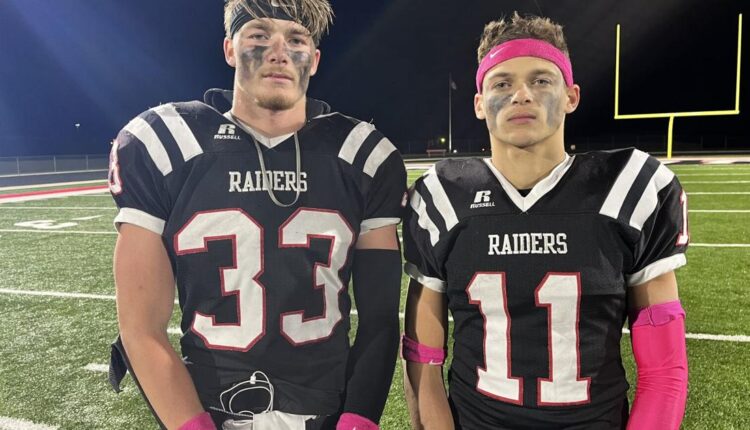 (Mount Ayr) — Mount Ayr has plenty of momentum heading into a Class A First Round playoff game on Friday evening.

The KMA No. 10 and KMAland No. 4 Raiders (7-1) were impressive in a 33-14 win over Southwest Valley in the final game of the regular season, securing a home postseason game with the win.

“I think it gives us a ton of confidence going into the playoffs,” Mount Ayr head coach Ryan Victor told KMA Sports. “That’s a really good football team. They’re a physical football team, and they have a lot of similarities in terms of the team we’re playing this week.”

The Mount Ayr team is playing this week is Ogden (6-2), which earned the No. 3 seed in Class A District 6 behind Lynnville-Sully and Madrid.

“They got a big kid at quarterback,” Victor said. “If you want to bring him down to the ground, we’re going to have to bring him down in numbers. They’ve got a tailback that averages seven yards per carry, and if their receivers get in space they’re going to go. They like to do some combination routes that are going to make sure we stay disciplined on the defensive side. We’ve got a lot to prepare for this week against another quality opponent.”

Mount Ayr should be plenty used to quality opponents having played in the rough-and-tumble A-7. Their only loss came to No. 3 ranked AHSTW, and they have wins over other postseason teams Central Decatur, Earlham and the aforementioned Southwest Valley by an average of 24.3 points per game.

The Raiders will likely ride their trio of stars on the offensive end in the postseason. Senior quarterback Jaixen Frost has 924 yards passing, 222 yards rushing and 12 total offensive touchdowns. Meanwhile, senior running back Braydon Pierson leads the team with 728 yards rushing and 14 scores, and another senior Jaydon Knight has 294 yards receiving and three touchdowns.

““Defensively, (Ogden) is going to have some defensive ends that are tall and tough to get the edge on,” Victor said. “They’re going to play some man because they’ve got some good athletes. We’ve got to be able to understand what we want to do more closely when we want to run the football. We’ve also got to be able to take advantage of the man on man. We like our athletes, and it’s a good test to see if we can play against another quality opponent on the offensive side.”

On the Mount Ayr defensive side, Knight has been a monster with 61.5 total tackles, 15.0 tackles for loss and 2.0 sacks while sophomore Tyler Martin has also had a big season with 10.0 tackles for loss among his 36.5 total tackles. They’ve also been one of the state’s most opportunistic defenses with 14 fumble recoveries and six interceptions, led by Pierson’s three.

Ogden junior quarterback Colby Rohe has 1,277 yards passing and 17 touchdowns on the season while classmate Quintin Hoskins tops the Bulldogs with 807 yards and nine touchdowns on the ground. Seniors Jack Christensen (41 receptions, 614 yards, 10 TD) and Cael Pearson (30 receptions, 433 yards, 6 TD) will also test that Mount Ayr defense on the outside.

“I think it’s going to come down to execution and physicalness,” Victor added. “We’ve done that at a high level the last few games, but we’ve got to continue to do it and be consistent. If we do those things, I really like where we’re going to be at the end of the game.”

Bret Ruggles will have reports from Ogden/Mount Ayr on Friday evening during the Red Oak Chrysler Football Connection Show. Check out the full interview with Coach Victor below.

Your browser does not support the audio element.