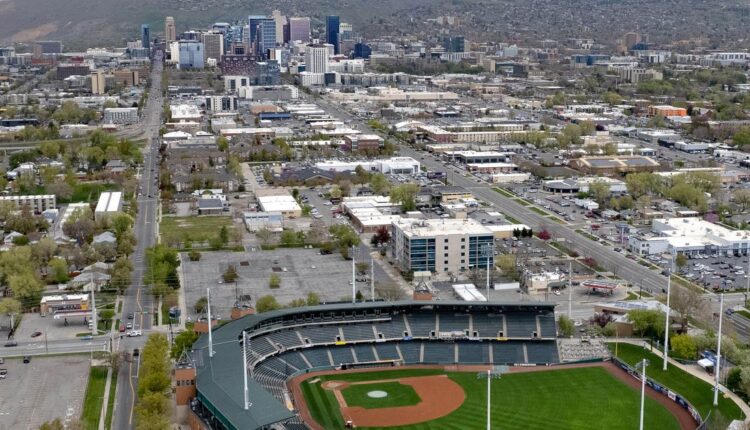 Moving baseball team to Daybreak will hurt its old neighborhood.

Decision to move baseball team to Daybreak is a swing and a miss.

Most days, to the outsider looking in, the state of Salt Lake City’s Ballpark neighborhood can be disorienting.

An unusually high crime rate, abandoned properties, vacant lots and the collective wear and tear of an unsheltered citizen crisis. It’s a lot.

But for those of us who live here, it’s also home to one of the most promising anchors in our city. For us, it’s easy to imagine and experience the potential of an active baseball stadium in the heart of a vibrant downtown with history, character and purpose. What could go wrong?

As a seven-year Ballpark neighborhood resident, it’s sobering to reflect on how our community and business leaders broker the cultural heritage we collectively steward as Utahns. Because it turns out, everything can go wrong.

The Salt Lake Bees and the Larry H. Miller Group (LHMG) have announced that they will abandon Smith’s Ballpark, the centerpiece of my community, and build a new stadium elsewhere. They will well out the heart of our struggling, but vibrant, Ballpark neighborhood in two years time.

The Bees will move to Daybreak, a predominantly middle/upper class suburban master-planned development, part of which happens to be owned by LHMG. And what will they be taking with them? A tremendous amount of economic activity, momentum and potential to radically elevate the heart of Salt Lake City for generations to come.

Long-standing geographic discrimination keeps shelters, prisons and resource centers locked into neighborhoods like ours, but this suburban heist of our ballpark is a whole new level of community theft.

Our city is deconstructing itself in front of our eyes. Tripping over the pressure of developers, growth and shiny opportunities to short-sell its character, culture and originality over here for economic grand slams over there. With no plan in place, the stadium and its history will be demolished.

City leaders are scrambling to project optimism while residents like me are left picking up the pieces of closed-door decision making. And for what? Faster, higher, bigger, newer, cheaper, whiter, safer, same(r).

Sadly, this story is deeply unoriginal. When leaders of The Church of Jesus Christ of Latter-day Saints felt inspired to have the church build a super mall called City Creek three blocks away from an otherwise vibrant Gateway mall, we saw what happened. Collaborative urban re-development was murdered by capitalistic cannibalization. Gateway died and Salt Lake got the same mega mall that exists in Santa Monica.

In place of complimentary growth, we chose the path of competitive consumption whose end product looks and feels like the main streets of every other American city. Instead of creatively re-imagining pockets of our town by investing into the unique aspects that define each neighborhood, we wastefully tear it all down. We take the easy path. We wipe the lots clean and we move away from problems. We build a false sense of safety by diverting our view elsewhere.

So, instead of rolling up their sleeves and solving the challenges surrounding the stadium we already treasure, the LHMG is diverting your attention to Daybreak where it can start fresh and make a pretty penny while it’s at it. No public dialogue. No advocacy from elected officials. No community consultation.

If the Ballpark inside the “Ballpark Neighborhood” is disposable, everything is. If you think the treasures in your neighborhood are safe, take a good look at this public/private collapse. This is a stadium-sized incarnation of collective white flight, and in it’s wake is a tired, yet motivated neighborhood left to foot the bill.

Well, us and every single Salt Lake City taxpayer who now has a 13-acre wound that will take decades to heal.

Sure, we will undoubtedly come up with ideas and designs for what fills this space. But as a society, we need to ask bigger questions. How did this happen in the first place? Why are we so quick to discard our history? Why are unaccountable private actors like LHMG driving policy and urban planning decisions? Where was our invitation to fight for our city?

It’s too soon for us to be distracted from having a frank discussion on how this loss came to be. We will not discard this community and we will thrive. But wow, what a swing and a miss.

Jordan Menzel is a resident of the Ballpark neighborhood, two houses south of the stadium, and serves on the board of directors of Preservation Utah.