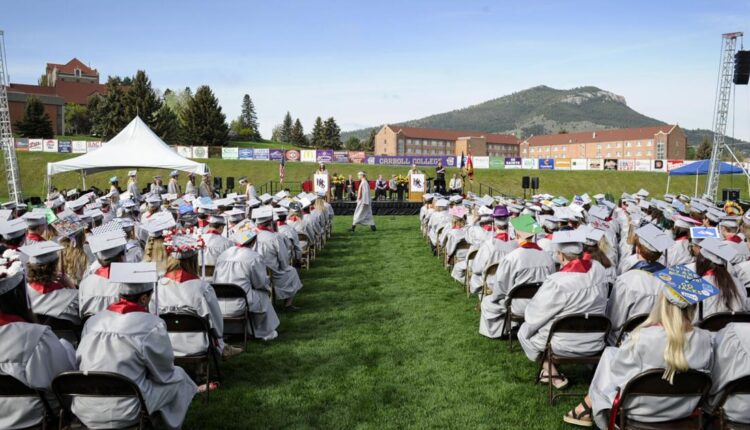 Nearly 50 students were involved in last week’s vandalism to Helena High School, a school district official said Tuesday. Most of them caused no or relatively minor damage, but a few caused more than $1,500 in damage to a piece of custodial equipment, the official added.

The vandalism seems to be the result of a senior prank that got out of hand, school district spokeswoman Karen Ogden said. The district has completed its investigation and is working through individual consequences with students and their families involved.

Helena Public Schools, which earlier said it was withholding diplomas from all graduating seniors of Helena High amid the investigation, said Tuesday that graduates can come to the high school’s main office to pick up diplomas and return textbooks and laptops.

Hours are 8 am to 3:30 pm Wednesday and Thursday, and noon to 3:30 pm Friday. School officials said this is traditionally the normal diploma distribution process every year.

Ogden said students involved will receive their diplomas after meeting with Helena High Principal Steve Thennis to determine consequences. She said the students and their families involved are cooperating with school administrators, and officials do not anticipate involving law enforcement. All involved seniors who met graduation requirements will graduate.

Ogden said Montana law allows a school district to withhold the grades, diploma, or transcripts of a student responsible for the cost of materials or damage to school property until the obligation is satisfied.

School officials said the damage occurred late Thursday evening and included, but is not limited to, aluminum cans and paper strewn about from overturned recycling bins, student artwork pulled down in the hallways and damage to a piece of custodial equipment. Three bathroom doors were removed from their hinges but the doors and hardware were not damaged and have been rehung, Ogden said.

The students entered through an unsecured window, and the more than $1,500 in damage to the custodial equipment is the total cost of the damage, Ogden said.

“The identified students and their families are being contacted and the consequence will be restitution for the $1,500 in damage to the one piece of custodial equipment,” she said.

Superintendent Rex Weltz said Monday in an email: “This is unacceptable behavior, and we will hold those responsible accountable.”

Graduation ceremonies were held Saturday for 263 students of Helena High. The ceremony was held at Carroll College’s Nelson Stadium.

In June 2012, a possible senior prank caused thousands of dollars of damage to Capital High School. Police say vandals smeared fecal matter in the teacher’s lounge, including in the refrigerator and microwave. Motor oil was poured into computer scanners and printers, ruining the electronics.

Get our local education coverage delivered directly to your inbox.

Walk-on to running for a title: BYU’s Fernandez among 21 bids at NCAA championships