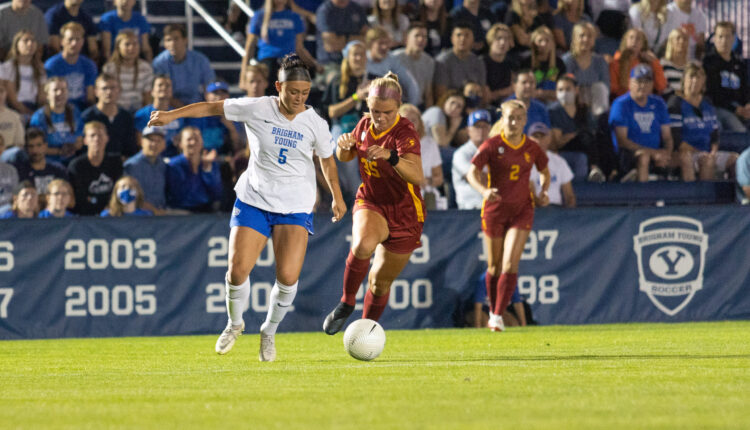 No. 24 BYU women’s soccer defeats No. 25 USC in front of a frenzied freshman crowd

The hordes of new BYU newbies may have arrived late for the game, but they got there just in time to see BYU’s No. 24 women’s football beat USC’s No. 25 Trojans 2-1 at South Field on Thursday .

“It was phenomenal,” said head coach Jennifer Rockwood of the 5,347 entrants. Sophomore and star of the game Brecken Mozingo said that the crowd’s energy “radiates” into the team and motivates them.

Freshmen were allowed into the game for free with their New Student Orientation Wristband and after half time they came in droves and filled the stands behind the goals and almost every inch of the sideline.

Mozingo didn’t wait long to start what Rockwood called a “breakout game” to them. She took advantage of a counterattack by newcomer Olivia Smith to get into the net with a left-footed shot in the 13th minute.

“Score first, shoot early and hit again” is the team’s motto, according to Mozingo. The native Sandy moved from UCLA to BYU and appeared to have a personal vendetta against her former rival in town with three shots, one goal and one assist in the first half.

BYU received a penalty late in the first half, but Mikayla Colohan’s shot was saved by USC keeper Anna Smith to keep the 1-0 lead.

Mozingo’s assist came after a free kick that Bella Folino headed into goal in the last five minutes of the first half, giving the Cougars a 2-0 lead at break.

By the time the second half began, the stands at South Field were completely full and fans poured into the standing areas along the sidelines.

A group of freshmen watch from the general admission area of ​​South Field. Freshmen had free entry with their New Student Orientation bracelet. (Addie Blacker)

The start of the second half was bumpy, with five fouls in the first five minutes. Smith received a yellow card in the 69th minute after a controversial no-call in the BYU penalty area and Natalee Wells received another yellow card for BYU in the 71st minute.

Rockwood pleaded with the team to calm the game down after a few rocky minutes in the Cougars’ defensive third. The ongoing chaos in front of the BYU goal ultimately led to a penalty in a cougar handball. USC took the chance to reduce the gap to 2-1 with seven minutes to go.

The Cougar defense held up strong, however, and the crowd broke out after time ran out, giving many BYU students their first glimpse of the Provo win.

“We are dogs,” said Mozingo after the victory. “We don’t want a repeat of last year. We want to keep getting better and keep going. “

The Cougars travel over the weekend to face Arkansas on Monday, August 30th, followed by a return to Provo against Marquette on September 2nd. Rockwood says “the games are getting harder and harder” as the team tries to make a statement before the West Coast Conference kicks off in October.