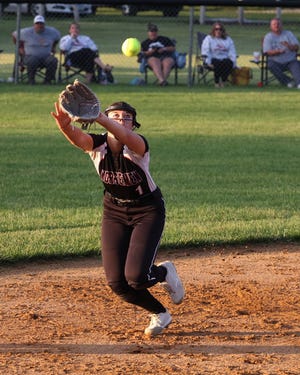 The Roland-Story softball team won four of its five games during the week and the Norsemen baseball team was 1-2.

The Norse softball team defeated Maple Valley-Anthon Oto by a 10-0 score Saturday and Odebolt-Arthur/Battle Creek-Ida Grove by a 22-0 margin Friday during the OABCIG Invitational at Ida Grove. Roland-Story also fell to a Newell-Fonda team ranked third in Class 1A by a 9-1 score during the tournament.

The Roland-Story softball team also defeated East Marshall at Le Grand June 7 by a 9-2 score and picked up a 13-3 Heart of Iowa Conference win over Prairie City-Monroe June 8 at Roland. The Norse concluded the week with a 7-5 overall record and a 4-2 conference mark.

The Roland-Story baseball team rebounded from a 17-2 loss in the first game to pull off a 10-0 victory in the nightcap during an HOIC doubleheader against West Marshall Friday at Norsemen Field in Story City. Stats were not available for the games at press deadline.

Roland story went to 7-5 overall and 6-1 in the HOIC at the conclusion of the West Marshall doubleheader. The Norse also suffered a 4-3 non-conference loss to Ogden June 8 in Story City.

The Roland-Story softball team averaged over 10 runs per game during the week.

In the victory over MVAOVOU the Norse put the game away early thanks to a six-run fourth inning. Faber finished 3-for-3 with two runs and an RBI, Ally Ringsby doubled twice and drove in a run and Birkland and Hayden Walters both picked up two RBIs.

Madison Geise was the winning pitcher against MVAOVOU after giving up two hits and one walk with eight strikeouts in five scoreless innings.

In the loss to Newell-Fonda the Norsemen fell behind 5-0 after two innings and never recovered. Geise gave up five runs in 1 2/3 innings, Jones threw 1 1/3 scoreless innings and Adison Sabatino allowed two earned runs on five hits in four innings.

Faber was 2-for-3 and Lexi Vaughn singled and scored the lone Norse run in the loss.

Roland-Story plated six runs in both the fourth and fifth innings to pull away from PCM for its HOIC victory during the week.

Ringsby was 3-for-4 with a double and four RBIs, Faber went 2-for-3 with a triple and two runs and RBIs apiece, Walters doubled, scored twice and drove in a run and Kamryn Lande picked up two runs and RBIs a piece. Geise was the winning pitcher, surrendering three runs on six hits and three walks with five strikeouts in five innings.

Roland-Story raced out to a 6-0 lead after two innings and coasted to victory against East Marshall.

Friest homered twice and drove in three runs against the Mustangs. Geise was 3-for-4 with two doubles and an RBI and Walters drove in two runs.

Geise picked up the win against East Marshall after allowing one run on just one hit with three walks and four strikeouts in 5 1/3 innings.

The Norsemen baseball team went 10 innings in the loss to Ogden.

Roland-Story gave up a 3-0 lead in the fourth inning and then there was a scoreless stalemate for the next five innings until Ogden broke through in the 10th.

Jackson Anthony took the loss after giving up one unearned run on two hits and two walks with three strikeouts in four innings. Thomas Matthes doubled and drove in a run, Brett Schmitz singled and picked up an RBI, Hesston Johnson knocked one run home, Cooper Loof singled and scored and Dillon Lettow added one single.