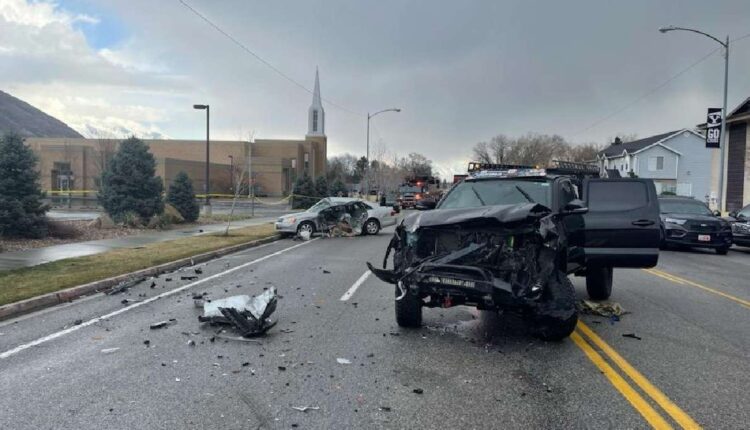 A 4th District Court judge on Tuesday ordered a Utah County sheriff’s deputy to stand trial on charges accusing him of recklessly causing the death of a BYU student whose vehicle he crashed into when the student was pulling out of a Taco Bell drive-thru. (Provo Police Department)

PROVO — Fourth District Judge Robert Lunnen ordered a Utah County sheriff’s deputy to stand trial on charges accusing him of recklessly causing the death of a BYU student whose vehicle he crashed into when the student was pulling out of a Taco Bell drive-thru.

Lunnen said on Tuesday it was “not an easy decision for the court,” but he ultimately decided this is a case that should be tried by a jury.

The crash occurred outside Taco Bell on 900 East in Provo on March 16, 2021. As Joseph Spencer, 22, was leaving the drive-thru, his car was hit by a truck driven by Joseph Richardson, a Utah County sheriff’s deputy who was on his way to a separate incident in his personal vehicle.

Richardson, 53, appeared in a suit and tie at a remote court hearing Tuesday. He is charged with manslaughter, a second-degree felony.

Deputy district attorney Patricia Cassel said the case is not just about speeding, and there is enough evidence to support reckless behavior to move the case forward to trial. She said Richardson was speeding much faster than the general conditions on the road allowed for, in an area where most speeding cars would go about 40 mph; Richardson was going over 55 mph.

She said Richardson admitted to police he should not have moved his car sharply to the left to try to beat the other car and should have hit his brakes.

Lunnen quoted what Richardson said to another officer when explaining his decision: “I shouldn’t have tried to beat him.”

The judge said speeding alone could not support the charges, but that a reasonable jury could determine Richardson swerving to try to get around the obstacle is reckless, as well. In order for Richardson to be found guilty of manslaughter, prosecutors would need to prove to the jury he acted recklessly.

“There’s certainly more than just speeding, in my mind, that the jury could consider in making a finding in this case,” Lunnen said.

The judge noted he feels bad about using Richardson’s honesty to support that he acted recklessly in his decision. Lunnen also said he wondered if the charges brought against Richardson would have been the same if he were not an officer, although he said this is not something he can consider in his ruling.

Petro, on the other hand, noted in the evidence portion of the hearing, which was held on Nov. 1, that an expert said swerving left could be considered a reasonable response to another vehicle being in a person’s lane of travel. He said an error in judgment to swerve should not be considered as a reckless element for the charges.

Lunnen relayed details about the case that neither attorney contested from the preliminary hearing, that Richardson was going 57.8 mph on a residential or business street while using no lights or sirens to warn other drivers. The judge said he believed a jury could conclude that the victim, Joseph Spencer, could easily have misjudged whether he had time to enter the street. The crash occurred inside the double yellow lines in the middle of the street, showing Richardson swerved significantly, and likely should not have swerved.

At the evidence portion of the preliminary hearing, Greg Duval, an expert who evaluated the crash scene said if Richardson were traveling at the speed limit he could have stopped without skidding, and if he had steered straight instead of to the left there would have been no impact.