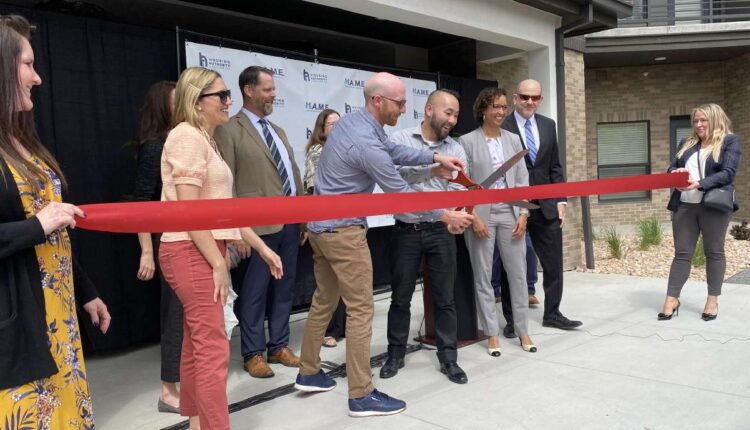 SALT LAKE CITY — With the swift cut of a bright-red ribbon, the transition of a once crime-ridden motel into a newly remodeled affordable housing complex in Salt Lake City was complete.

Community members, elected officials and members of several housing agencies were present Wednesday to celebrate another addition of affordable housing to the city. The four-story, 93 mixed-unit Capitol Homes Apartments provides an upgrade to State Street and a step forward in addressing the community’s growing need for affordable housing.

“We’re starting to solve these issues of shortages and affordability. It does take funding to solve but this type of the solution of funding, believe it or not, unlike many other things, throwing money at it — or better yet gaining funding and carefully analyzing ingredients and building places — really does work,” said Daniel Nackerman, executive director at the Housing Authority of Salt Lake City.

The Housing Authority of Salt Lake City has been a constant voice in the conversation as the city continues to struggle with affordable housing. As the population grows and new developments continue to rise, the affordability of homes has grown scarce. The issue has caused many to scramble to find housing and others to be pushed out.

“Members are stepping up like never before,” Nackerman said. “In doing that, citizens are also paying more attention to affordable housing than ever before as the realization of the need for stable lives in a stable place to live impacts all including schools, businesses, hospitals and neighbors.”

Neighborhoods like the one the Capitol Homes Apartments are a part of, located on State Street, represent much of what Salt Lake City councilman Darin Mano wants to bring back to District 5.

“There are windows, there are storefronts and these are the types of projects that we need for State Street to actually turn back into a street that serves not just cars coming from the suburbs into our downtown area, but people that actually live here,” said Mano.

While neighborhoods may initially have some reservations or fears, those are often unfounded, advocates said.

“I have to fight those stereotypes all the time that these are a negative thing for our neighborhoods. We prove over and over to so many others that once they’re built, everybody is surprised how wonderfully they fit into the neighborhood and how big a part of the neighborhood they become,” said Nackerman.

The building retained but one thing from its previous existence as “a notorious motel that was called the Capitol Motel” — the name, Capitol Homes.

Its transformation will bring a new life to the neighborhood, said Britnee Dabb, deputy director of the Housing Authority of Salt Lake City. The motel struggled significantly with crime before it was purchased by the housing authority, including one crime that really stuck with Dabb.

“Years ago I read a story about a young mother who was tragically murdered at the Capitol Motel, which is two blocks from our office. Her tragic death was extremely disheartening to me,” said Dabb. “She was mother to a young daughter and my daughter was close to her age. I could not imagine being taken from my daughter in such a manner. I still think about her and her daughter.”

Jessica Jensen, 25, was found dead in a motel room in 2011. Community members were shocked at the brutality of the crime and mourned the loss of such a young woman. Thomas Kumalac was arrested and later convicted of Jensen’s murder. Kumalac is serving a life sentence for the crime.

But the conviction wasn’t resolution enough and the building always stood as a reminder.

“When we had the opportunity to purchase Capital Motel and create a safe, affordable housing site, it meant a lot to me,” Dabb said. “We were able to create affordable housing for 93 families to call home, and one less blight location in our beautiful city.”

Ashley Fredde is a reporter with KSL.com covering arts, culture and entertainment news, as well as human services, minority communities and women’s issues. She graduated from the University of Arizona with a bachelor’s degree in broadcast journalism.