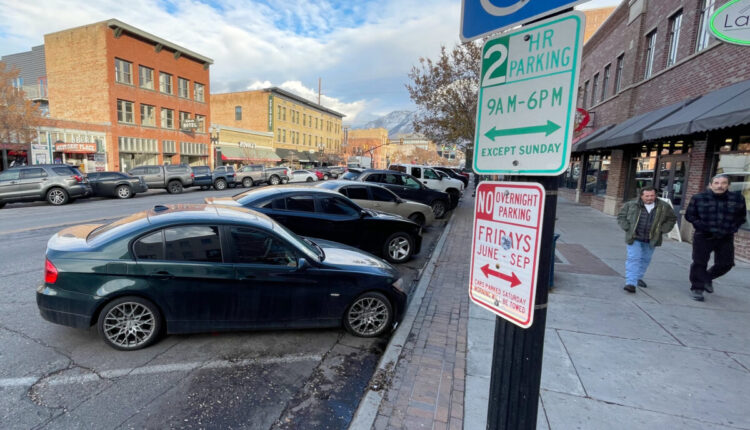 Residents attend an open house hosted by the City of Ogden on the proposed WonderBlock development in downtown Ogden on Thursday, Dec. 8, 2022, at Union Station.

The image shows downtown Ogden and depicts the phasing of implementation of paid parking downtown. The blue area would be first followed by the yellow area and then the green area.

OGDEN — Paid downtown parking in Ogden, if implemented as proposed, would cost motorists $1.15 million in 2023, rising to $5.91 million by full roll-out in 2025, according to the consultant that studied the matter for the city.

Actual revenue to the city after expenses related to implementing and maintaining the system would spike to $3.52 million in 2024, according to the study by Salt Lake City-based Kimley-Horn. But after payments of the debt issued in connection with the project started, that would dip to $586,716 in 2026, edging up past $1 million a year by 2029.

Of course, the figures are estimates, and actual implementation of paid parking — if ultimately approved by the Ogden City Council — may take longer. The numbers, though, provide a glimpse into the potential impact of shifting to a paid parking system, a key element of the city’s proposed WonderBlock development in the vacant lot behind Historic 25th Street between Lincoln and Grant avenues.

Downtown parking is currently free and David Sawyer, deputy of Ogden’s Business Development Office, says most initially grumble at the notion of shifting to a paid model. Kimley-Horn recommends charging $1 an hour for parking from 9 am-6 pm each day for starters, with a $5 daily maximum.

“It rubs most people the wrong way,” Sawyer said at an open house on the WonderBlock plans held at Union Station on Thursday.

Residents attend an open house hosted by the City of Ogden on the proposed WonderBlock development in downtown Ogden on Thursday, Dec. 8, 2022, at Union Station.

But when he explains it to critics, they come around — some of them anyway. The Kimley-Horn study said a paid model promotes turnover in high-demand parking areas, like along Historic 25th Street, a good thing for businesses since it creates opportunities for more motorists to visit their locales. Paid systems can also generate income for communities that implement them.

As described by city officials, moving to the paid parking system would help generate revenue to maintain city parking garages and other parking infrastructure, rather than having to scrape funds together from other sources. The WonderBlock plans, and other proposed downtown development in years to come, are expected to bolster demand for parking in the area.

The main WonderBlock component of the plans has an estimated price tag of $188 million to $199 million, with $124 million of that coming from J. Fisher Cos., the developer teaming with the city. The parking element, calling for two garages in the WonderBlock footprint and implementing the paid system throughout downtown Ogden, would cost between $53.5 million and $85 million, all of it covered by the city via bonds and most of the money for the parking structures.

Whether the city moves forward with the WonderBlock and paid parking plans is still up in the air. The Ogden City Council is scheduled to consider two bonds to help pay for the plans on Jan 10.

The image shows downtown Ogden and depicts the phasing of implementation of paid parking downtown. The blue area would be first followed by the yellow area and then the green area.

Presuming the plans get the green light, Sawyer suspects paid parking would be rolled out in phases over three to five years.

According to the city plans, the first downtown area to be converted to paid parking would be along 23rd, 24th, 25th and 26th streets roughly between Wall Avenue and Washington Boulevard. Lincoln and Grant avenues and Washington Boulevard from 22nd to 26th street, with some exceptions, would also be paid parking, as well as the Union Station parking lot and the Electric Alley parking area behind the businesses along the north side of Historic 25th Street.

The phase two area sits north of that, bounded roughly by Lincoln Avenue and Washington Boulevard on the west and east and Ogden River to the north. The phase three area includes the two proposed WonderBlock parking structures and 22nd through 26th streets extending east of Washington Boulevard to Adams Avenue.

Sawyer said kiosks would be placed along city sidewalks in areas with street parking, where motorists would pay. Lots with paid parking would be gateless and also served by kiosks.

The Kimley-Horn study alluded to concerns that paid parking discourages customers, countering that almost all of “the most vibrant downtowns” in the country have some form of paid or managed parking.

“Here, the density of jobs, housing, pedestrian activity, public transportation, one-of-a-kind stores, restaurants and venues and the overall downtown experience are more powerful economic factors than the potential impact of charging for parking — especially if parking fees are reasonable compared to the price of goods and services,” reads the study.

Operating expenses would cut into revenues, though, resulting in net annual funding for the city in the first few years after bond repayment fully starts from $587,716 to $1.29 million.

Those attending Thursday’s open house on the WonderBlock plans, meanwhile, offered a range of views.

Adrienne Zubiller suggested the apartments proposed in WonderBlock should be for low-income residents, given the many transportation options in the city center and proximity to the Weber Human Services office.

Chandler Arnold likes that the plans seem to “pay some respect” to Ogden’s history as well as the proposed grocery story in the WonderBlock complex of buildings, a mix of apartments and commercial, retail and office space.

Al Jones offered favorable words, but worries only big chains would be able to afford rent costs in the WonderBlock buildings. “How is a Vietnamese immigrant going to start a Vietnamese restaurant?” he said.

Chris Barragan, who operates Brookey Bakes on 25th Street, hopes the new development, if ultimately approved, retains some of Ogden’s flair. “Let’s make sure we maintain our identity as we continue to grow,” he said.

The Ogden Redevelopment Agency is to discuss the WonderBlock and paid parking plans at a meeting next Tuesday.

Who should bear the cost of helping Utah’s unsheltered population?