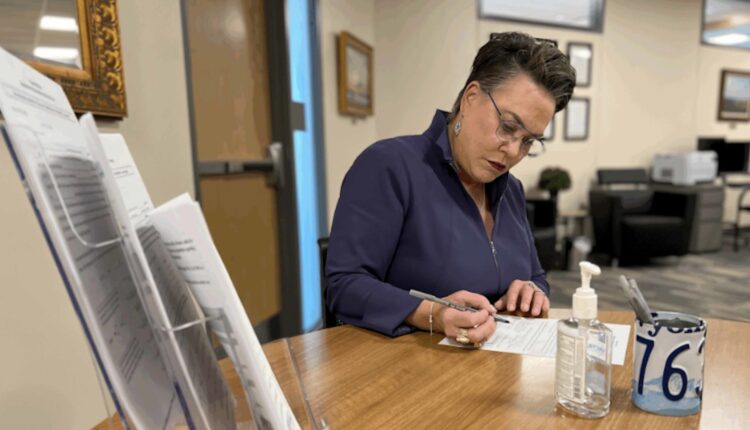 Harriet Hageman’s opponents in Wyoming’s US House race continue to focus criticism on Hageman’s involvement in a Flaming Gorge water pipeline project initiated more than a decade ago.

Last week, Hageman put out a press release and an op-ed explaining her role in the project that would have, if completed, connected a pipeline from the Flaming Gorge Reservoir to municipalities in Eastern Wyoming and the Denver Metro area.

That project was initiated by the water district manager of a major Colorado municipality, Frank Jaegar of the Parker Water and Sanitation District.

Hageman was an attorney on the project and spoke on his behalf at numerous public meetings.

Over the weekend, anti-Hageman TV commercials played in the Cheyenne market, bringing up her involvement in the project.

“Harriet Hageman backed a scheme to send water from Wyoming to Colorado,” the female narrator says. “And when Wyomingites opposed the plan Hageman ignored us like a typical politician.”

The commercial was paid for by Americans Keeping Country First, a Washington, DC based super political action committee that paid $150,000 for the ads.

The facts Whether Hageman “ignored” Wyoming residents is questionable. Certain people have confused Hageman’s project with a strikingly similar but separate project proposed by Colorado entrepreneur Aaron Million that was publicly unveiled at the same time, around 2009-2010.

Hageman’s project was run by a collaboration of public water entities known as the “Coalition.”

In comparison to Million’s project, the Coalition placed a slightly larger focus on providing water to Wyoming through their project but was similarly initiated by Colorado stakeholders for a majority share of the Flaming Gorge water given to go to Colorado consumers.

“I’m a capitalist, but at the same time, when talking about public water supplies, especially a water supply of this magnitude, it’s better situated in the public venue,” Hageman said during a 2010 Casper City Council meeting for the Coalition project .

Since there was no official project application ever submitted on the Coalition project, complaints are not readily available on this project.

What may be telling however, is the hundreds of complaints submitted opposing Million’s project, roughly a half year before Hageman came to the Casper City Council, asking for a $20,000 commitment from the municipality to join in a feasibility analysis.

“Instead of listening to people of WY, and yes, many of the letters of opposition were from her friends and colleagues,” one of Hageman’s opponents, State Sen. Anthony Bouchard, R-Cheyenne said in a Sunday Facebook post. “But Hageman chose to listen to Colorado interests that wanted billions of gallons of water from the Green River to feed the rapid growth of Colorado’s Front Range.”

There is no evidence that Hageman ever worked on Million’s project.

During the 2010 meeting, Hageman spoke against Million’s project, but did say that some of her associates had met with Million about two years prior and that she had worked with Million’s attorney at the time, on a number of projects.

In May he announced finding new investors for the pipeline that would take 55,000 acre-feet of water from the Green River, through 338 miles of pipe east across southern Wyoming and south to Colorado’s Front Range.

According to the Colorado Sun, an acre-foot is roughly the amount needed to cover a football field in 12 inches of water, or about 325,000 gallons.

At the 2010 meeting, Hageman said it would be advantageous for Wyoming municipalities to be owners of a portion of the water rather than end-users paying a million for their use.

“If it falls into private hands with entrepreneurship, government won’t have control of the cost of the water if it may need it in the future,” Hageman told the council.

In her op-ed, Hageman defended her role in the Coalition project, describing Colorado as an ally when it comes to partnering on water issues as a fellow Upper Basin state in the Compact.

She said Colorado was simply fulfilling its 51.75% interest stake in the Colorado River system as part of the 1922 Colorado River Compact, when pursuing the Compact project. Hageman also said during the council meeting, the project wouldn’t be economically feasible without Colorado’s participation.

Hageman and other members of the Coalition held a series of public meetings with stakeholders throughout Wyoming around 2009-2010.

Bryan Seppie, general manager of the Sweetwater County Water Users Coalition joint powers board, said these meetings and meetings hosted by millions were met with large outcry from the public at the time.

A Communities Protecting the Green Committee was formed in 2009 to take legal action if water ever was to be diverted from the Green River.

The organization became the Sweetwater County Water Users Coalition in 2021.

Seppie said the organization exists today to advocate for the public on local water issues and laws.

Hageman said another difference between her project and Million’s was that the Coalition pulled water directly from the Flaming Gorge, while Million’s pulled water from the Upper Green River Basin.

Original iterations of Million’s project did propose pulling some water from Flaming Gorge but later versions relied solely on the Upper Green River for sourcing.

“They purposely had different parameters from the get-go,” Seppie said. “I don’t remember it as being collaborative.”

To many residents who attended stakeholder meetings for these projects, this level of nuance may have been a matter of semantics compared to the bigger picture.

“Obviously, the region in the Western Slope and Southwest Wyoming views the (Green) River and supply to the river as being potentially threatened,” Seppie said.

The Green River and Colorado River system have been in a drought since the early 2000s. Seppie said even by 2010, the effects of this drought were becoming obvious in the effect on the local ecology.

It’s unclear what exactly happened in the immediate months and years following the 2010 meeting, but Deirdre Mueller, head of communications for Parker Water, said the Coalition project has been defunct “for more than a decade.”

Seppie said he hadn’t heard about the project in “many years.”

“Both projects had large hurdles to overcome,” Seppie said, adding no feasibility analysis was ever produced on the Coalition project.

But in September of 2017, Hageman wrote a new memorandum on the prospect of diverting Green River water from the Flaming Gorge Reservoir to Lower Basin states and the Front range of Colorado.

During a May 2018 meeting held in Green River as part of gubernatorial campaign, Hageman continued to separate herself from Million’s project, promoting her belief that water for municipality use should not be owned by private water owners, according to a Sweetwater Now story at the time .