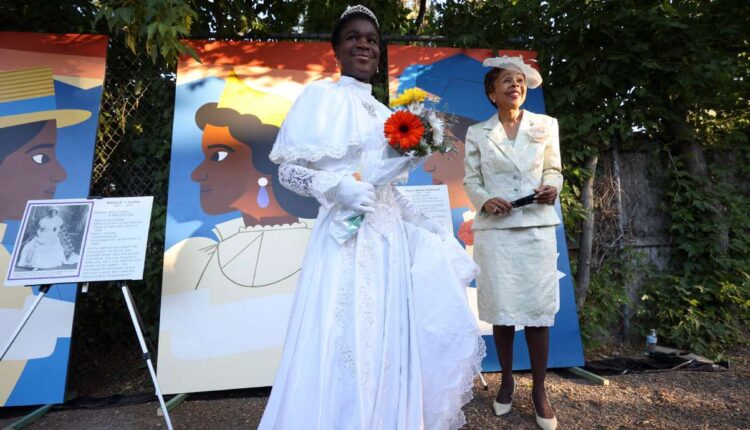 Ava Isom and Jackie Thompson pose for photos at an unveiling ceremony for a new mural featuring four Black women at Richmond Park in Salt Lake City on Monday. Isom, 13, is dressed as Elnora Dudley, who was crowned queen of the 1898 Emancipation Day celebration. Thompson represents Mignon Richmond, the first Black woman to graduate from college in Utah. (Kristin Murphy, Deseret News)

SALT LAKE CITY — Four prominent Black women separated by time will be brought together in a neighborhood where each once lived and worked.

A new mural featuring Jane Manning James, Elizabeth Taylor, Elnora Dudley and Mignon Barker Richmond was unveiled at Richmond Park, 444 E. 600 South in Salt Lake City, on Monday. The mural will be installed in the community garden at the park once completed. The unveiling of the mural was among one of the final events in Utah’s Juneteenth celebrations.

The mural — which features the namesake of Richmond Park — represents a recognition of Black women’s contributions to Utah.

“It is always good when we get to recognize particularly our Black women in the community. We all know that representation matters,” said Rep. Sandra Hollins, D-Salt Lake City. “We stand on a lot of shoulders of Black women right here in this state who have done a lot. … You may never know their names, but they work silently to help create opportunities and help build this state up.”

The commission and installation of the mural is a collaboration and partnership between Better Days, Sema Hadithi African American Heritage and Culture Foundation, Wasatch Community Gardens, the Utah Division of State History, Salt Lake City Arts Council and the Utah Division of Arts & Museums.

The women are featured in chronological order and depicted with different hats to represent the roles they held in their communities.

Jane Manning James was known to her friends as Aunt Jane. She was born in 1822 to a free family in Connecticut where she later became a member of The Church of Jesus Christ of Latter-day Saints. Following her family’s conversion, they moved to Nauvoo, Illinois. Due to her family’s race, they walked 800 miles to Illinois after being denied passage on a boat.

When James arrived in Nauvoo, she developed a close friendship with Emma Smith, wife of Latter-day Saint prophet Joseph Smith, while working in their home. James later fled Nauvoo and traveled to the Salt Lake Valley with other Mormon pioneers where they purchased a home near the Salt Lake Temple plot.

James was one of the first documented Black women to enter Utah and became an advocate for equal rights in The Church of Jesus Christ of Latter-day Saints. She was an active member of Relief Society and her community.

In the mural, James is depicted in fine clothing representing passages from her journal that expressed her appreciation for beautiful clothing. She’s dressed in a church bonnet and a brooch, clothing found in the few historical pictures of her.

“These three pieces are statements on the importance to her and how she looks and honoring her. I thought it fitting that she’d be dressed how she was,” said Alice Faulkner Burch, director of Sema Hadithi.

Elizabeth Taylor was 17 years old when she resided in Utah around 1891 where she married her husband, William Wesley Taylor. The couple began a newspaper for the Black community in the territory. Taylor continued running the newspaper after her husband died, utilizing it as a tool for advocacy and education. She called for the Salt Lake City Council to extend equality and pass an ordinance that ended segregation in places of business.

Outside of her advocacy, Taylor belonged to a literary society and led children’s groups. She also was an active member in her church.

Elnora Dudley traveled to Utah with her parents when was 8 years old in approximately 1892. She was crowned the queen of Salt Lake City’s Emancipation Day celebration of 1898 when she was 15, which is how her portrait in the mural is portrayed.

Dudley never married but was continuously involved in the surrounding community. She was able to purchase her home, which she continued to own as a single Black woman through the Great Depression until her death in 1956.

Her crown features a ruby ​​in the portrait despite the actual crown containing a pearl. The ruby ​​is a reference to Proverbs 31:10, which states a virtuous woman’s value is above rubies.

Burch said she wanted the statement to remind girls and all women of their worth.

Mignon Barker Richmond was born in Salt Lake City in 1897 to William Barker and Mary Alice Reagan Barker. She became the first Black woman to graduate from college in Utah and was a fierce community leader and civil rights advocate.

The mural, as a whole

Despite each portrait being separate, each woman is brought together in the background.

“The mountains behind them represent Utah and the arduous journey, the touch of snow that will be at the top of each mountain symbolizes harsh climates — politically and socially — that each woman worked and lived in Utah. The colors above the mountains is the rising sun, symbolizing that the sun has still not set on the work they did and that even now in the year 2022,” explained Burch.

The woman are connected with a banner beneath them, symbolizing the work each of them share “across the various decades and joining them as Black American women.”

The mural was unveiled by descendants of the women, community leaders and children. The ceremony also featured music by the Calvary Baptist Church, which joined the crowd in signing a variety of songs.

“Black American women are part of Utah history and did important work and made highly significant achievements for all of us,” said Burch. “May this mural help to continue to work using these women’s drive to do uniting the people of Utah via truth.”

Ashley Fredde covers human services, minority communities and women’s issues for KSL.com. She also enjoys reporting on arts, culture and entertainment news. She’s a graduate of the University of Arizona.