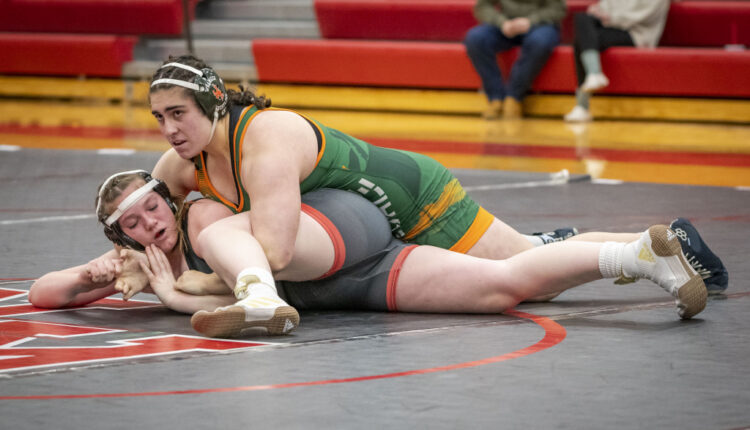 KEMMERER – The Pinedale High School wrestling team catapulted back onto the mats after a brief holiday break to score a commanding 45-33 victory against Kemmerer in an away duel on Thursday, Dec. 29

Fielding a smaller roster due to the winter vacation, the Wranglers and Lady Wranglers attending the duel stepped up to the plate, said Head Coach Kendall Horrocks.

“Everyone wrestled tough and we are proud of them,” he added. “It is always tough wrestling in the middle of Christmas break because we never know how may athletes we are going to have. Overall, we have been wrestling well and will continue to work hard as we prepare for the Tournament of Champions in Vernal, Utah, this weekend.”

Freshman Wylee Willson opened the action with a win for Pinedale in the 120-pound bracket. He pinned Bryce Brown 1 minute, 32 seconds into the bout.

Sophomore Ryan Nutt hit the mat next and defeated Roany Profitit by a 9-1 major decision in the 126-pound division.

At 145 pounds, senior Ethan Kemp defeated Bridger Anderson by fall with 22 seconds to spare in the first period.

Freshman Landon Fornstrom won by a 9-4 decision against Grason Kelley in the 160-pound bracket.

Widening the lead for Pinedale, junior Austin Green took down Aaron Despain by fall early in the second period of the 195-pound bout.

Junior Jamison Snell and freshmen Kaylea Mortensen and McKinzie Mortensen each won by open forfeit in their respective weight classes.

The Pinedale High School wrestling team is back in action at the annual Tournament of Champions in Vernal, Utah, on Friday and Saturday, Jan. 6-7.

In North Carolina, More People Are Training to Support Patients Through an Abortion