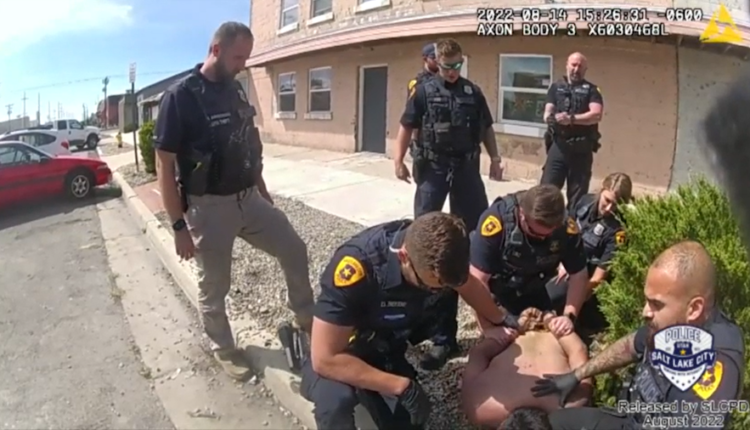 Police brought Megan Joyce Mohn, 40, to the ground in January; Nykon Brandon, 35, in August. In both cases, several officers held them face down on the ground, kneeling and leaning on their backs and lower bodies over the course of just a few minutes. Both later died.

Prone restraint is common in Utah and across the country. When the police try to apprehend someone who doesn’t want to go to jail, there’s often a struggle on the ground that ends with suspects facedown, wrists in handcuffs at their low back.

When this happens, Utah’s police academy directs officers to move a person into a recovery position – on their side or sitting up – as quickly as possible.

The department’s policy is similar to the police academy curriculum, stating person “shall not be placed on his/her stomach for an extended period, as this could reduce the person’s ability to breathe.”

But the guidance is vague, with no timeline or details on when exactly they should turn someone upright. And new research points to more deaths from prone restraint in the US than previously thought.

It happened in January & again in August.

Two people died this year after being held on the ground, face down, by Salt Lake City police officers. @KSLInvestigates Police Restraint tonight at 10 on @KSL5TV pic.twitter.com/7Mpae3Itl5

‘A full on fight’

Heather Yazzie said she doesn’t doubt that. But she believes Brandon, her fiancé, might still be here to dote on her kids and play with their husky if police had helped him sit up on the day of his death.

“My world was shattered,” Yazzie said. “He was already in handcuffs. At that point, I don’t think he was resisting any more other than trying to breathe, you know?” Brandon had long fought drug and alcohol addiction, Yazzie recalled, and had been sober for several months before relapsing over the summer.

On Aug. 14, police responded to a report of a man trying to steal beer at Fisher Brewing Company and running in the street in his underwear.

Body camera footage shows an unarmed Brandon running away from police in the road before reaching toward the officer’s holstered gun. He shoves the officer before he’s pushed to the ground, fighting back as an officer leans on his upper back, forcing Brandon onto his stomach.

He continues to struggle with officers, who hold him face down in the gravel for more than three and a half minutes and place him in handcuffs as he cries out several times. Police are seen pressing on Brandon’s head, neck and back at different points.

“We will sit you up if you stop,” an officer says in the video.

“You got to be cooperative, though, man,” another adds.

One more officer can be heard asking, “You guys want to put him in recovery?”

A moment later, an officer taps his shoulder and says, “Can you hear me?” Brandon doesn’t answer and police begin to turn him over.

He was pronounced dead within the next 45 minutes, according to Salt Lake City police. A cause of death has not yet been released.

“What he did that day is inexcusable,” Yazzie said. “I’ve never seen that side of him.”

She understands why police reacted the way they did after Brandon reached toward an officer’s holstered gun, she said. But she believes officers could have approached him in a calmer way.

“He was already out of hand,” Yazzie said. “And I think they just kind of fed off of that and just jumped right in without any de-escalation.”

Alon Steinberg, a cardiologist and author of a recent paper on prone restraint and cardiac arrest, told KSL he’s “not surprised at the unfortunate results.”

Being held face down on the ground impairs a person’s breathing and circulation, he said. And while many survive, a number of people die from being restrained this way each year in the US

Steinberg said while he hasn’t seen autopsies, the deaths of Brandon and Mohn appear to be cardiac arrest from prone restraint.

Certain factors, like drug use, along with obesity and violent struggles with officers, can drive up the risk of death, Steinberg said.

“They’re usually breathing hard, and their heart rate is going fast for a reason,” Steinberg said. “They need that, and if you decrease it significantly, some people are prone to dying.”

Building on reporting by television station KUSA in Denver, he weeded through lawsuits filed across the country and identified about 228 deaths tied to prone restraint nationally, from 2010-2018. He says doctors, medical examiners, police and lawmakers need to work together to prevent these deaths.

“We want to educate people that this is a potentially dangerous position,” he said.

Warnings about the risks aren’t new.

A 1995 US Department of Justice bulletin cautioned that as soon as suspects are handcuffed, they should no longer be on their stomach. But the messages to police in nearly two decades since then have been mixed, with other reports suggesting the warnings are overblown.

In its 16-week course, Utah’s police academy teaches that prone restraint is one tactic that “may increase risk of sudden death,” according to portions of the curriculum KSL obtained through a public records request. So is placing body weight on the person’s back or chest or using a hobble – an adjustable nylon belt tying handcuffed wrists to feet – on someone who’s face-down. Warnings about the risk of sudden death are not new. A 1995 bulletin from the US Department of Justice advised law enforcement to move suspects into a recovery position as soon as they are handcuffed.

And while there’s a good chance officers and a suspect will end up on the ground, Garcia said it shouldn’t stay that way.

“Curriculum dictates that they are to move that position or that individual to an alternate position as soon as safe as soon as possible,” he noted.

Garcia declined to talk about specific cases but spoke in general terms. Placing a time limit on how long a person can remain facedown, he said, would be unrealistic.

“To put any sort of restraint like that on an officer of saying, ‘You have to do this in X-amount of time – every situation is different,'” he said.

“Sometimes I think the public expects them to be superhuman and not make mistakes,” Garcia said. “And sometimes mistakes happen in this job.” In January, Mohn was held facedown for 4 minutes and 40 seconds by Salt Lake City officers responding to calls of a woman waving rebar at trucks near the Marathon Refinery in Salt Lake City.

She yells, “Help! Help!” while officers speak with her, cut off her backpack and tell her to stop kicking them, body camera video shows. One officer is seen kneeling on her back, while another folds her legs toward her back and leans on them.

“It just seemed like that pressure in a very short period of time likely caused her to pass out,” said Steinberg, who reviewed the video and shared his opinion with KSL. “And I’m assuming she went into cardiac arrest at that point, because she was unresponsive.”

She’s heard murmuring in the video before she stops speaking altogether. As an officer releases her leg, it falls heavily toward the ground and officers begin to turn her over.

Mohn died about three weeks later, on Jan. 30, according to Salt Lake City police. It’s not clear if she ever regained consciousness. The State Medical Examiner’s Office ruled her death a homicide, identifying the cause as “cardiac arrest” due to “probable methamphetamine intoxication in the setting of an altercation involving physical restraint.”

Under Utah law, Salt Lake District Attorney Sim Gill will determine whether the officers’ conduct leading up to Brandon’s and Mohn’s death was legally justified. There’s no deadline for those reviews.

As she waits for more information, Heather Yazzie is reflecting on the last time she saw Brandon.

The morning of his death, “He gave me a hug, and it was a tight hug, really tight,” Yazzie recalled. He’d planned to go back into treatment and had an assessment scheduled for the following day, she said.

Yazzie also is recovering from addiction and said she and Brandon bonded over working hard to stay sober together.

Have you experienced something you think just isn’t right? The KSL Investigators want to help. Submit your tip at [email protected] or 385-707-6153 so we can get working for you.