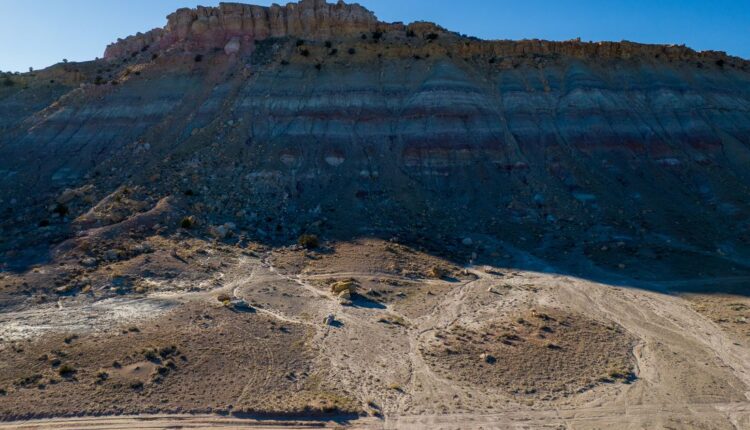 (Trent Nelson | The Salt Lake Tribune) The site of a proposed quarry near Vernal, just west of Dinosaur National Monument, on Wednesday, Nov. 17, 2021, where the Playa Sand Project would produce sand for use in fracking operations in the Uinta pool The Bureau of Land Management has shelved the project in August 2022 while it works out which federal laws apply to the management of the sand deposit.

A proposed sand quarry on public land near Dinosaur National Monument has been sidetracked into a bureaucratic inquiry regarding how to classify sand used in oil and gas drilling operations.

A company called Uinta Basin Sand LLC holds mining claims on 392 acres about 10 miles east of Vernal which it intends to develop into the Playa Sand Project, where millions of tons of sand would be extracted within view of the monument’s western reaches.

But hardly a week after launching an environmental review this month, the Bureau of Land Management suspended its evaluation to address a critical question that has little to do with environmental impacts and everything to do with bureaucracy.

Is sand injected down oil and gas wells a “common” or “uncommon” use of this mineral? The distinction makes a big difference in how the BLM would oversee the project, according to Lance Porter, the BLM’s Green River District manager.

Should frac sand be deemed “common,” the Uinta Basin Sand LLC would not be able to put a mining claim on the sand deposit, but rather would have to buy the sand it would mine from the federal government under the Mineral Materials Act, Porter said. In 1955, the oversight of sand, gravel and other aggregates was moved from the 1872 Mining Law to the 1947 Mineral Materials Act, making it harder to establish mining claims on such deposits.

If fracking were deemed an “uncommon” use of sand, however, the Playa Sand Project would be regulated under the 1872 law, which many critics contend is hopelessly outdated and allows extractive industries way too much latitude. This law allows minerals to be extracted without any royalty paid and enables the land’s title to be transferred to the miner.

Interior Department officials must now figure out whether frac sand qualifies as a “valuable mineral deposit” under the 1872 law or a “salable” product under the 1947 law. Because of past inconsistent applications of these laws, making the determination may be much harder than it sounds.

The review is expected to take a year and when it’s concluded Uinta Basin Sand may re-initiate the environmental review.

Greg Hunt, a Colorado-based mining entrepreneur heading the project, did not respond to a request for comment. In 2019, his company, Uinta Mining LLC, applied to mine frac sand at Skull Creek about 30 miles to the east on state-owned land in Colorado.

But that application was withdrawn soon after nearby residents spoke out against the project, according to Colorado news reports.

Although fracking has become almost ubiquitous in the oil and gas industry, mining frac sand has focused on just a few places in the country and never on public land. Accordingly, the Interior Department has not had an opportunity to classify frac sand until now, according to Larry Garahana, a mineral examiner in the BLM’s Utah office.

“Frac sand has always been mined not on BLM land,” Garahana said. “Just more recently we’ve had operations that are now proposing frac sand operations on [public land]. So BLM is in the process of trying to make a determination on frac sand.”

Complicating matters is the presence of sage grouse habitat at the Playa Sand site.

Under BLM’s rules adopted in 2015 to protect the iconic ground-nesting bird, new “mineral materials” mines would not be allowed on land designated as “priority” habitat. Those restrictions don’t apply to pre-existing mining claims for “locatable” minerals under the 1872 law.

“If the sage grouse were not involved, they could proceed. The regulations let you proceed with processing the [mine] plan because there’s an option of an interim authorization if the operator chooses to put up an escrow account,” Garahana said. “They would put the fair market value of the material into an escrow account while the BLM makes this determination.”

In hydraulic fracturing, or fracking, fluids are injected under intense pressure into hydrocarbon-bearing rock, causing the formation to fracture. The sand is needed to keep the fractures open to allow oil and gas to escape once the fluids are pumped out.

But the granules must meet certain criteria for size, shape and hardness — or crush resistance. Since the dawn of the fracking era in the 1990s, most of this sand has come from Wisconsin. Uinta Basin oil and gas producers are now looking for local sources to avoid exorbitant shipping costs.

Two major frac sand operations have started up in Uintah County since 2020, each producing around a million tons a year.

Unlike these other mines, the Playa Sand Project has drawn fire from nearby residents and environmentalists, who were relieved by the BLM’s decision to holster the project.

“Approving a frac sand mine in such close proximity to Dinosaur National Monument poses an unacceptable risk to monument resources and directly impacts the quality of life for rural residents along Brush Creek,” said Cody Perry, a contract advocate with the National Parks Conservation Association. “An open pit mine may impact tens of thousands of visitors who use the Island Park road to access the monument. No national park unit should have an industrial operation at its doorstep that mars the landscape by emitting noise, dust and the rumble of 30 to 100 haul trucks per day.”

The sand would be trucked 40 miles west to a processing plant in Roosevelt.

According to information the BLM provided at an Aug. 10 public meeting, the proposed quarry would tap the exposed Dakota Sandstone formation, which is so soft that explosives would not be needed to extract it

Operations would occur only during daylight hours. An estimated 11.2 million tons of sand are recoverable at the site.

The haunted mansion lurking next to Deseret News