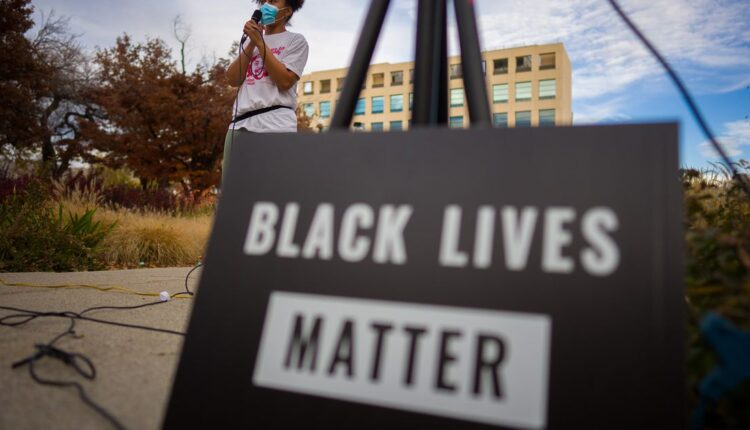 Community organizers say elected officials have pulled out of talks over police reform.

(Trent Nelson | The Salt Lake Tribune) Rae Duckworth speaks at a protest by Black Lives Matter, Utah Against Police Brutality and The Community Activist Group calling for police reform, claiming the mayor and the SLCPD have left the open conversation the community announced such reform on Thursday, November 4, 2021, in Salt Lake City.

The protesters called for a reform of qualified immunity for police officers, a form of legal protection that officials can use in civil claims for damages. And they called for independent civil review bodies to investigate complaints against the police. The Salt Lake City Police Department’s Civilian Review Committee currently has an advisory role in assessing complaints of police misconduct and has no independent disciplinary powers, according to the city’s website.

The group at Thursday’s protest – organized by Black Lives Matter Utah, the Community Activists Group, and Utah Against Police Brutality – also called for more money to be spent on social programs instead of militarized police equipment and suggested that officials use their body cameras excessive use of force.

The 17-page plan contained four general goals: reducing crime, improving response times, filling vacant officer positions, and building relationships with the community. The 2021 plan was originally released in January, but the updates announced on Wednesday were developed as police worked to re-evaluate and implement parts of it, officials said.

“I’m disappointed because [Mendenhall] has four pledges and only one of the four supports the community and the rest supports the police, ”Duckworth said. “That further influences me to believe that the community is not their priority. The police are. “

Duckworth said the Community Activists Group meets regularly to give family members of people who have experienced police brutality the opportunity to discuss proposed changes to prevent such violence from occurring in the future. Mendenhall no longer wanted to take part in these conversations, said Duckworth.

At a press conference announcing the updated plan on Wednesday, Mendenhall said it was “completely wrong for us to pull out of reform”. The mayor noted that no other city in the state has put in place a reform mechanism like the Commission on Racial Equity in Policing, launched in Salt Lake City in June 2020.

“She encourages people to go to this commission, but the commission is nothing more than a pretty badge,” said Duckworth. “It’s their nice, formal conversation for police reform.”

The commission made “significant budgetary recommendations” that led to the induction of 12 more social workers, Mendenhall said Wednesday, as well as the use of $ 200,000 to provide community officials with diversity and justice training.

For Duckworth, Mendenhall’s emphasis on the more formal commission and lack of focus on the Community Activists Group is unfair as it takes power away from the community, she argued, and “community conversations are not nice”.

(Trent Nelson | The Salt Lake Tribune) Rae Duckworth speaks at a protest by Black Lives Matter, Utah Against Police Brutality and The Community Activist Group calling for police reform, claiming the mayor and the SLCPD have left the open conversation the community announced such reform on Thursday, November 4, 2021, in Salt Lake City.

“Sometimes they get really dirty and they’re emotional,” argued Duckworth. “They are colourful. The fact that [Mendenhall] To advise against it is really disrespectful, especially because the people who are heavily involved in this conversation are family members of people who have experienced police violence. “

“Homelessness will not go away”

The revised plan announced 10 new grant-funded officer positions that would give police the ability to hire an “all-time high” of 581 officers, Brown said.

To meet the plan’s four main goals, the department plans to introduce new incentives for vacant officer positions, a key component in combating late response times, officials said. Incentives include rewards for current officers who successfully transfer a career changer – a Utah police officer with at least a year of experience – as well as housing incentives for officers and an expansion of the Department’s take-away policy.

Duckworth believes the updated plan is inconsistent with Mendenhall’s pledge of police reform.

“It’s especially disrespectful because this mayor had the boldness to come here and kneel down during the protests,” said Duckworth. “If you kneel with us, it is because you are with us. You stand in solidarity with us. “

Duckworth led chants at the meeting, including, “No justice. No peace. “And” Call Mendenhall back “.

Stacey Johnson also spoke to the crowd, sharing her experience as an unshielded person in Salt Lake City. Johnson reported that she and her husband, who is a black person, were attacked by a woman who repeatedly bitten them. She said that no police responded to her emergency that night, but the next morning the officers forced her to leave her camp.

“Homelessness will not go away. We are people. Lives don’t go away, ”Johnson told the crowd.

(Trent Nelson | The Salt Lake Tribune) Stacey Johnson, a homeless woman, speaks at a protest by Black Lives Matter, Utah Against Police Brutality and The Community Activist Group calling for police reform, claiming the mayor and the SLCPD have ” chosen to retire “. “From an open discussion with the community about such reform in Salt Lake City on Thursday, November 4, 2021.

Johnson expressed frustration with the way the SLCPD treats vulnerable people and criticized Mendenhall for failing to participate in the reduction of camps.

“You can’t wipe people out. No matter how many warehouses you close, ”said Johnson.

Brown said Wednesday that agencies other than police may begin responding to calls if such agencies may be better equipped than officials, including mental health crises that involve no aggression or a weapon.

“We’re looking every day for ways to better connect with our community, hear them and make them a part of this organization,” said Brown. He noted that the SLCPD holds monthly meetings with the Latino Coalition, a refugee community group, and with native Hawaiian Pacific Islands.

Can Southern Utah Be Stopped By Montana, Others?